Weight records for sea ﬁsh are a phenomenon of the years since World War II. Before that there was little interest and no central body to formally vet and record big-ﬁsh claims. The Fishing Gazette simply noted large fish reported to them, likewise the Anglers’ News for its annual Big Fish Lists. The National Federation of Sea Anglers awarded medals for specimen ﬁsh caught by members of afﬁliated clubs. The British Sea Anglers‘ Society kept registers of large specimens caught by their members, separately for shore-caught specimens. All rather haphazard.

The picture changed after the war, with the rapid growth in competitive angling and the award of prizes, sometimes of substantial value, by clubs and the new weekly angling papers. As the prizes were often awarded by reference to known records it became important to have reliable records. It was also perceived that separate records should be kept for shore-caught specimens. A committee was appointed to deal with claims for records and to publish approved lists. Some of the older “records“, deriving from the various informal sources, were discarded as being unsafe, due to doubts about the long accepted weights or, in at least one case, about the identity of the ﬁsh. A notable casualty was the 1912 ballan wrasse of 12lb 12oz caught off Looe with three others over 1Olbs. As these weights were so much higher than any other reported wrasse, efforts were made to substantiate them from contemporary reports and from the known measurements derived from the mounted specimens. Sadly, these efforts indicated that the weights were in all four cases overstated, probably by about 3lbs each.

About the early bass records there was no doubt F.C.Borley‘s 18lb 2oz ﬁsh was fully reported in the Fishing Gazette of 4th December 1943, and there was also a full story in “Angling” for May 1960 by the tackle-dealer who vouched the ﬁsh. About the previous biggest UK bass, 17lb 8oz from N.Ireland in 1935, little was known until October 1953, when an article by the captor ( W.G.Bryon ) appeared in the Fishing Gazette. He gave details of that and other large bass he had caught when rock-fishing at Castlerock, and of an even larger bass which he lost at the gaff when a big wave forced him to jump to a higher rock. Earlier big bass captures are shrouded in the mists of uncertainty. The largest recorded in the British Sea Anglers Society records (which are in my possession) was 13.5lbs, caught at Weymouth in 1927.

Early books on fish and ﬁshing mention bass of well over 20lbs in weight; e.g. Couch (1862), one of 29lbs. That would be a commercially-caught fish, and probably not accurately weighed. One of 26lbs caught on a beach line off Wakering Stair near Southend in November 1931 was the subject of quite full coverage in the Fishing Gazette and was probably correct as to weight. In more recent years one of “at least” 25lbs, weighed by the MAFF officer, was caught off Looe in December 1990.

Records are all very well – and essential for ensuring fairness in competitions. But for those not interested in competitive ﬁshing they have little relevance. More important to them is their own personal “best” for each of the places ﬁshed, and having regard also to the strength of tackle used. 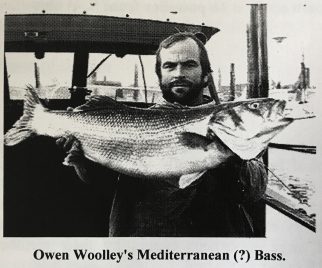 I confess to another interest in large bass, where scales are available: to speculate as to the likely origin of the ﬁsh. Some of the big ones have been unusually fast growers for UK waters. I recall especially some very large ones caught in 1976 at Bradwell Power Station by Owen Woolley. The largest, l7lb 9.25oz, was only 13 years old, weighed about 5.25lbs at age 6, and was of a year-class hitherto unknown in UK waters (1963, the year when the Arctic winter frustrated spawning). The pattern of growth accorded more with Mediterranean bass, and it was possible that the fish had come north in the long hot summer of that year, and when winter set in (rather suddenly) been drawn to the warm water in the vicinity of the power station. There is no way of proving the supposition, but a weight of 5.25lb at age 6, while normal for the Mediterranean, would be impossible in the cooler UK waters (where the usual age 6 weight is about 1.5lbs).

One year I noticed that I was getting, among numerous 1966 class, quite a lot of bass which seemed large for their age. Once again the weight at age 6 was a clue: it was around 2.5lbs – which happened to the weight normally reached at that age on the Biscay coast of France. I had been getting samples of bass scales from a laboratory (Areachon) on that coast, and when I reviewed them again realized that the 1966 class was dominating. I was next able to get temperature data for that area – and I found that in 1966 they had had an exceptionally warm February – the peak month of spawning on that coast. It seemed clear that Biscay had enjoyed an exceptionally successful spawning and that – as is usual with an exceptional spawning – the class had spread widely, with many fish coming to UK waters. As before there was no solid proof but all available indicators were pointing that way. Strong support for the supposition came when one of the 1996 fish tagged in Anglesey was recaptured two years later on the Biscay coast, at L’lle d’Yeu. It was one of the fast-growing fish.

I am often asked, what is the highest recorded bass for a particular county. The records I have kept of reported bass of 10lbs and over are I think complete for really large ﬁsh. In Table 3 I list the heaviest bass reported from each county separately for shore-caught and boat-caught; together with the total number reported of 15lbs and over, to 1996 inclusive. It is an impressive list and shows clearly the dominance of the south-east for very large bass. In Table 4 I list all the reported specimens, up to 1996, weighing 17lbs or more. Again, an impressive list; and showing, again, the dominance of the south-east (19 out of 26). 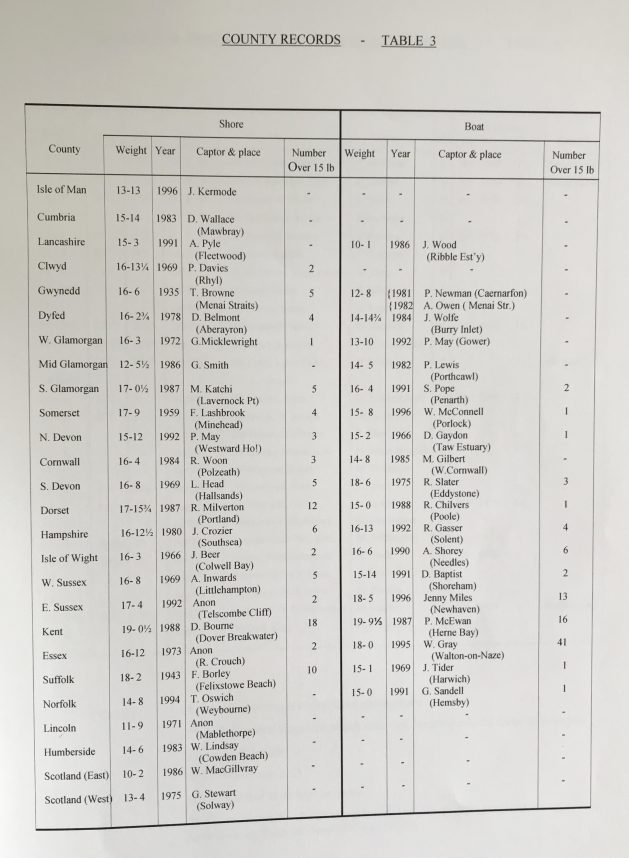 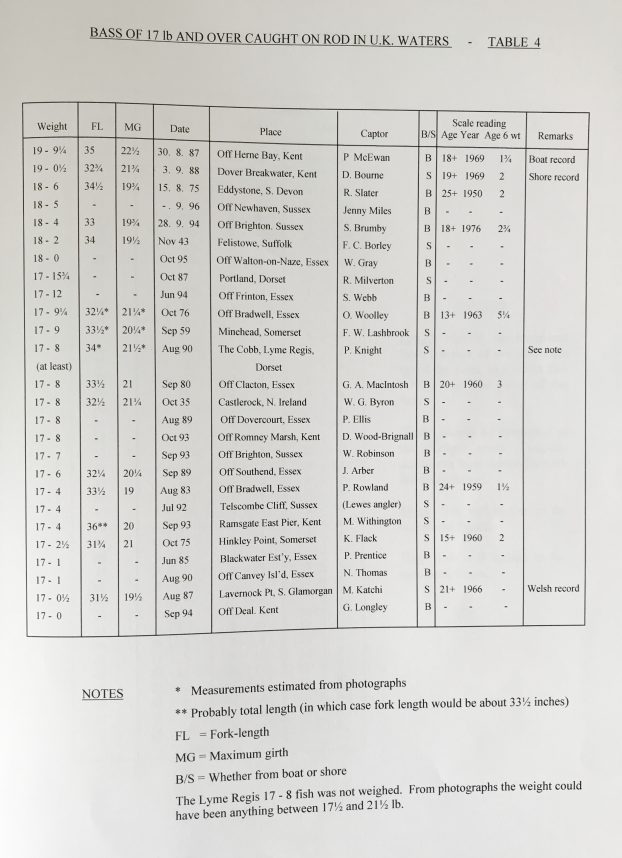 In compiling records of large bass it is as well to apply a degree of healthy scepticism to the reports. Most are genuine but some are not; like the large bass reportedly caught by a certain W.Hopper; and the 17.25lb bass reported from Ireland which in fact was found to be 7.25lbs – a bonus of 10lbs had been added under competition rules to allow for the fact that it was caught from the shore. From time to time there are reports of bass of over 20lbs. Follow-up has usually shown them to have been caught commercially, or to have weighed rather less than 20lbs; or that they were in fact salmon, caught accidentally and given an innocent label.

Recently, going through my old Fishing Gazettes before sending them off for auction I came across a long-forgotten letter of mine to the Editor –

The Editor noted that –

“Mr. Kelley‘s compliment should go to a compositor, not to our reporter: these records are in fact “printer‘s errors”.”

There was a time when the weights given would be taken quite seriously. Not now – thanks to the care taken by the Record Fish Committee in vetting record claims.