At the mouth of the Lynher estuary, near where it joins the Tamar, there is a small unfrequented quay, rarely used. It makes a pleasant picnic spot. It also produces, on its day, lots of flounders. One sunny afternoon, not long after the war, I was standing there assembling my tackle while my wife with her mother laid out the picnic. Suddenly something caught my eye: dark clouds gathering over the distant moors. I stopped putting the gear up, had a quick look at the tide table, and watched the northern sky. It quickly became evident that a violent thunderstorm was developing.

We were in no danger of a soaking; it was a local moorland storm, ﬁfteen miles away, and would not reach us. But . . . my thoughts too were now miles away, along the coast to the east, to the mouth of a little estuary where I often ﬁshed. I knew what that storm meant. 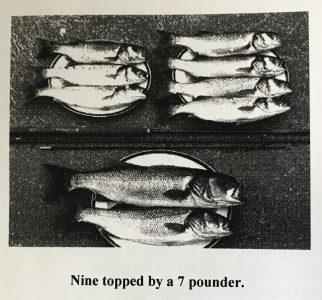 I put my tackle away, and B and her mother packed up the picnic things. We drove back to Plymouth as fast as trafﬁc and ferry allowed, and after dropping the ladies at our home I hurried on to the estuary. I knew that if I could get there in time to catch the brown peaty flood which the storm would bring down I would ﬁnd the bass feeding in the bar pool. there would be an hour‘s ﬁshing before the tide got too low.

I arrived just in time and in the hour caught nine bass, all of nice size and topped by a 7 pounder.

It was a classic example of being in the right place at the right time: the right combination of good tide and favourable sea conditions. In those early years after the war there were far more bass about and it was much easier than it would be today to identify the best conditions for each of the places ﬁshed. In that little estuary, and in other similar ones in south Devon and west Wales there were two situations which invariably gave good results –

brown peaty water brought down to the mouth after heavy rain in the catchment area; and

roughening sea after a spell of calm weather.

In these conditions my average catch of sizeable bass, for about 2 hours fishing, was seven. In prolonged rough weather it dropped to two; and in sustained calm clear conditions it was less than one. The top catch-rate would have been much more than seven but for problems with the new nylon traces: they frequently broke on the strike – usually on what seemed a good fish.

One year I had little opportunity for fishing, and early in November I realized that the season was slipping away from me. I desperately wanted one last fling and hastily packed my gear and a few crabs and headed for another small S.Devon estuary, where earlier in the year I had a few good catches. I knew the tide would be suitable – but I completely overlooked the conditions. I arrived to ﬁnd the estuary calm and clear with a cold north-east wind blowing down it. I went straight home without even getting my tackle out.

Two evenings later the wind turned southerly. I went out again and found the estuary in perfect order. Within minutes I had a bass on. It was a good one and took full advantage of the current, seemingly unfettered by my powerful spinning rod. The size when I got it ashore 20 minutes later was a little disappointing – 9lb 5oz. A long lean ﬁsh, it ought to have weighed more like 11 lbs (thirty years were to pass before I reached that milestone).

I resumed fishing and caught several smaller ﬁsh up to 2½ lbs, then on virtually my last cast hooked another big one. It swam in almost to where I was wading, then seeing me bolted down river and out over the bar. It proved a thicker, livelier ﬁsh and tired more quickly: 8¾lb. 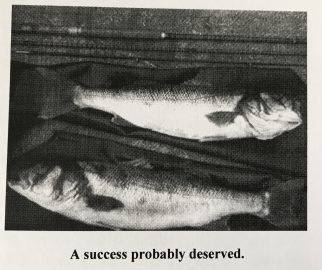 As I headed for home I reﬂected on the wisdom of not being tempted to ﬁsh on that mistaken ﬁrst visit. That was a success I probably deserved. I recall another catch however for which I could claim little credit. Again I had been short of ﬁshing. We had recently moved into our new home and for weeks all my spare time was given up to decorating. Towards the end of it I felt that same yearning to have a rod in my hand.

I had no transport – my petrol ration was exhausted. But I knew there was an evening bus out to one of the estuaries, and another in the morning to get me back. As before I checked the tide. Which was good, but forgot about the conditions. I was luckier than I deserved – I saw on arrival that they were perfect. The balance of justice was restored when I overstayed my sleep on the sands and found I was too late for the last of the ebb. Fortunately the bass came back in on the flood. By the time I very reluctantly packed up to catch the bus back I had caught 8 nice ﬁsh of 3 to 6½ lb apiece. They were still biting and I was sorely tempted to stay on. But I had to be in my ofﬁce by nine and could not think of a good excuse.

I made my way to the bus terminus – to ﬁnd no bus waiting. I had no watch – the inexpensive watches of the day didn‘t seem to work on me when l was fishing. I had however always been a good judge of time from the tide. Had I failed this time? There was no one about, but close to the bus stop there was a phone box. I dialed the time number – and found I was an hour too early.

However I felt I already had more ﬁsh than I deserved and did not put my gear out again.

Some of those small sandy estuaries have quite deep water just outside the bar. I recall one in west Cornwall and three in Wales. On a big spring the outgoing tide creates a race just outside the bar, and in calm conditions (which would be useless in normal tides) this often attracts bass. I have had some good catches in all four – quite recently in the case of the Welsh ones.

Reﬂecting on some other bass ﬁshing situations I am certain that they all have their good conditions and their bad ones. The difference isn’t so dramatic as in the shallow water of those estuaries and the only conditions where ﬁshing is a waste of time is when it is too rough. At the other extreme I have sometimes had bass in a dead calm on prawn – provided I kept a low proﬁle and did not move about.