Safety and risk – do or die?

But we all think about risk all the time, even though we may not do it consciously. When we are fishing we constantly assess the likelihood of making that jump to a rock or whether that wave is going to crash over me (and where will I end up if it does), whether it’s safe to wade that channel and so on. Usually it’s all pretty innocuous and easy to analyse but the point about all of this is that you do analyse it. If you don’t plan and analyse you are simply just hoping for the best. Most fishermen who hope for the best are still with us, but some aren’t.

Perhaps It’s more helpful to think in terms of the worst case. The question ‘what’s the worst thing that could happen’ forces you to think about whether you really are that comfortable with an outcome. Will I simply get wet, or will I break an ankle and not be found for three days?

Often I fish from a very small inflatable Zodiac. Being ‘on’ the sea rather than beside it adds a whole new dimension to a fishing trip. What you don’t want to do is spend all your time worrying about whether you might die when you should be enjoying yourself and catching bass. Asking yourself ‘what’s the worst that could happen’ when you are in a boat usually ends up with ‘I could die’ so it really is something to take very seriously indeed.

I’m not going to be prescriptive here about what safety gear to use either on the shore, or on the boat. There are plenty of articles on that already, but clearly a life jacket is going to keep you afloat if you are in the water. Is that enough? What would happen if you were in the water and couldn’t get back out? Let’s say you are in a tide rip and fell over, or on the rocks and a wave washed you in. Getting out again might be very difficult indeed – perhaps its dusk, pretty close to being dark and you are on your own being washed out to sea. What would you do?

It’s dark now, you’re getting farther away from land and you’re cold. You’ve dropped your rod already and your life jacket is keeping you afloat but nobody knows you’re there. It’s getting choppier and the wind is getting up, you try and strike out for the shore but the tide is pushing you along. Before too long you’re too tired to do anything and its pitch black. Your mobile phone is useless as it was in your trouser pocket. You can’t think of anything other than how cold you are and you’d give anything, absolutely anything to see a boat coming towards you, a lifeboat with helping hands. But that isn’t going to happen because no-one knows you’re there and you have no way of getting help. You might still be alive in the morning when the potting boats come out, you may not. You start to pray for a miracle, pray for anything, hope that someone else will help you out, hope that someone will find you – hope for the best. 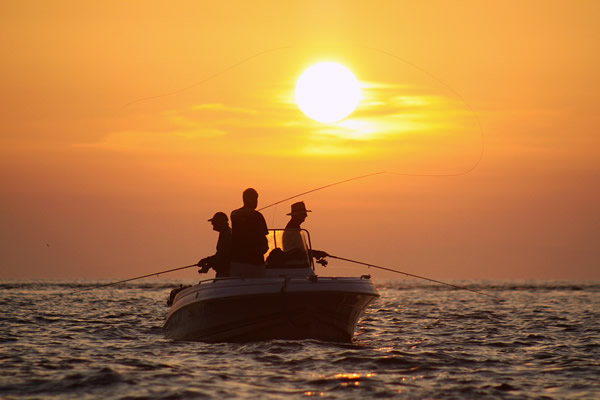 It’s all doom and gloom when you think each scenario through to its logical and worst case end. It never ends well in these stories and of course it shouldn’t. It’s just an example to prove a point. The reality is that in any story of any tragedy there are times when the cycle could have been broken. That spanner in the works that stopped the grim reapers wheel. Maybe you managed to make a mobile call to the police or coastguard, or you made that call on your VHF.

Telling someone where you are going and what time you will be back is the simplest safety mechanism of all – but how many of us do it. Does you wife or partner really know where you are, right down to the exact beach, or stretch of coast? They may know the County, you may even have taken them there – but could they tell someone quickly and easily on the telephone when they are under stress?

So have you ever been in the water, unable to get back out? It didn’t happen to me, but I saw it happen.

It was a boat crossing a sand bar of an estuary and the boat tipped over, giving the one person onboard an early bath. The tide was going out (it was a spring tide too and positively heaving through) so before too long the boat and the angler were far apart. In 30 seconds they were both out to sea in choppy water and the man was pretty much invisible. Just a little black speck every second or two, bobbing up on the crest of a wave.

Luckily it was a sunny summer afternoon, people saw it happen and the lifeboat was soon on its way. But they still took a while to find him. By now they were drifting further and further out to sea. Back on the quay I listened to the ‘safety briefing’ that the lifeboat coxswain gave the angler. It was pretty serious stuff based mostly on ‘what if’ scenarios. Two questions stood out:-

These two questions sum up the risk analysis. If you can’t tell someone you’re in trouble you’re relying on other people to raise the alarm for you. And even if the rescue services are trying to find you, it’s no good if they can’t see you easily and quickly. 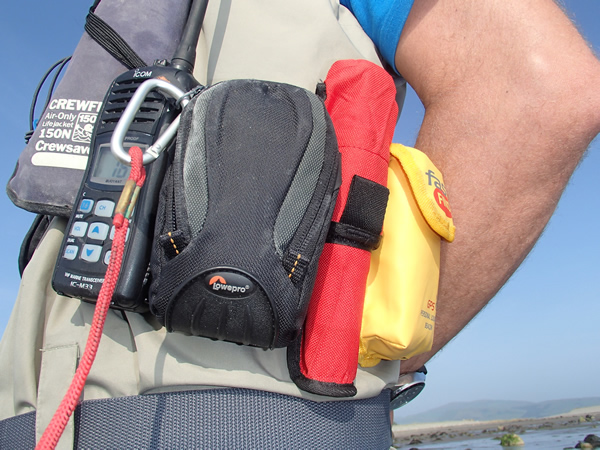 VHF, lights, personal flares and personal locator beacons are all expensive things to put on your lifejacket. But as I said when you are in the water wondering whether anyone has seen you fall in you would give everything you own to know that you could contact the coastguard, and then for them to have a mechanism to find you.

So the next time you go fishing just spend a little time worrying about your own safety – being dead really does cut into your fishing time.