To begin, bass spawn at sea 20 miles or more off shore starting in February, continuing for a few months. The hatchling bass larvae mingle with the plankton, but somehow move inshore to enter estuaries such as the Fal and Tamar in Cornwall in July when they are about 3 cm long. To date these larvae have not been found in the open sea and it seems important for their survival that they manage to get to these “nurseries”, staying here for about four years.

Regular sampling of these very small bass, the so-called “O” groups, will provide the most efficient method to assess the strength of the year classes and any decline in the stocks. Donovan Kelley proved this by sampling in the Camel and Tamar in Cornwall starting in 1981. 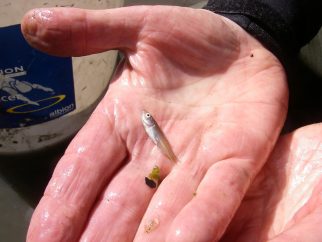 Sampling work begins in May and June looking for fish from the previous year’s spawning, the so-called “1” Groups. This gives a confirmation of the strength of the previous year’s class, how the fish have survived their first winter and what sort of growth they have made. By July the first fish of this year’s spawning are beginning to arrive but are too small and fragile to withstand the rigours of sampling, so netting is suspended. August and September sees us looking for this year’s “O” groups.
Bass nurseries were established in 34 areas by the Ministry of Agriculture Fisheries and Food in 1990. The Helford in Cornwall is one such bass nursery and the Helford Voluntary Marine Conservation Area (HVMCA) needed information regarding bass as there were no records of post larval bass in the Helford or the nearby Fal estuaries. Following Donovan Kelley’s recommendation, as Conservation Officer for the Cornish Federation of Sea Anglers (CFSA) and longstanding member of BASS, I undertook an “investigation” helped by John Bridger, a fellow angler and friend of Donovan. The original aim was simply to find “O” group bass, and our success in locating them has increased over the years. The objectives now are to monitor the “O” and “1” group bass in dedicated sites in the Fal and Helford, to work with Cornwall Inshore Fisheries and Conservation Authority (CIFCA) for an assessment of juvenile bass stocks, to provide some information on other species, to provide guidance and information for future research workers and to work with students.

As Donovan predicted it was a tough nut to crack. A lot of exploration was done in the mud to find suitable netting sites and where these small bass could be caught. Suitable net/nets had to acquired, and a sandeel seine first tried was unsuitable. The Environment Agency lent a 10 yard seine, and better still Donovan passed on his 20 yard seine. There were many trials in 20 different sites each requiring a suitable netting technique. Until a boat was used the net had to be humped over fields, and foreshores. For most sites there was scant success or the mud was too difficult, but by 1999 bass were found in three reliable sites.

With the agreement and blessing of the HVMCA, netting was reduced in the Helford so that the “investigation” could be extended to include the nearby Fal in 2000. Donovan and John had done some preliminary trials here with scant success but their work was very useful. 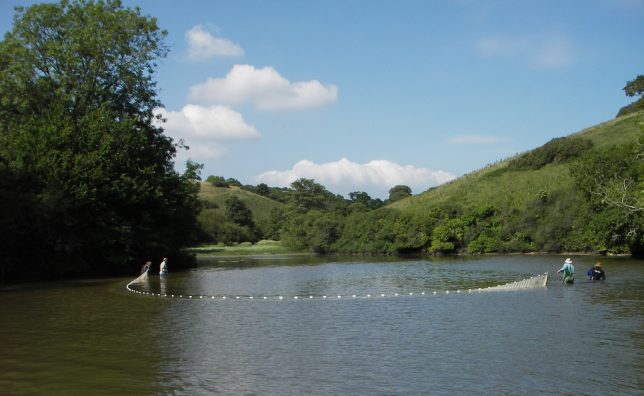 There has always been so many helpers from the very beginning, mostly from sea angling clubs, and later from students and tutors at the Falmouth Marine school. Sam Davis now Chief Officer for CIFCA, is a keen supporter and helped netting whenever she could. So many others have helped from time to time from all walks of life.

The reports are sent to the Helford VMCA, three scientists at CEFAS, CIFCA, the Management for Fal and Helford Special Area of Conservation (SAC), the Environment Agency, Cornwall Wildlife Trust, and Cornwall Environmental Records to name a few.

If there was any doubt about the efficacy of the sampling that was dispelled when CEFAS decided it was desirable for all IFCAs with bass nurseries in their area to undertake similar sampling to that in the Fal and Helford. Sam Davis organised a successful juvenile bass netting workshop in the Helford which was attended by four Sea Fishery District Officers in September 2010 and as a result, several IFCAs have continued with netting surveys in their districts.

Many trials were needed in the Fal before suitable sites could be found, and to date only three have been found.
In good years some notable successes were made. In 2003, 2,500 one year old bass (“1” groups) were netted in the Helford proving that 2002 was a good year class and had survived their first winter well. In the Fal a first netting in one site in 2008 produced about 2,500 “1” groups, proving that 2007 was also a good year. So much else is of interest, namely the catches of small gilthead bream provided positive evidence that they now spawn in UK waters. Sprats, sandsmelt, red mullet, scad, sandeels, pilchards, common sole, flounders, and of course plenty of grey mullet are all caught, and released.

The sampling can provide so much more than the state of bass stocks. With a team of volunteers they can probably find better sites, an understanding of bass movements throughout the year, their food, if they move between the Fal and Helford, and also a record of the state of the mullet, and other fish in the SAC. Sampling also provides confirmation of similar studies in other bass nurseries. Hopefully volunteers will continue, and I’m looking for someone to take over when I hang up my wellies to provide new ideas and continue the work in Cornwall. If you want to get involved in your area a good starting point is your local IFCA.

First published in Sea Angler in 2017