In the spring after a lay off from bass fishing I just want to catch and any means short of dynamite will do. Come summer though, if I have been lucky enough to chalk up some numbers of fish, my need to just catch (to some extent) becomes satisfied and how I catch comes more into the reckoning.

To many, including myself, the ultimate thrill in bass lure fishing is to catch off the top. When I hooked my first bass using surface many years ago the my heart nearly burst, and although the exhilaration of that first take can never quite be repeated, every subsequent bass caught on the surface still has added value compared to fish fooled on other methods. I find it impossible not to shout, laugh or whoop aloud when the longed for, yet unpredictable moment occurs and the water film around the lure is suddenly disrupted, detonating an explosion within the chemistry of my brain. If fishing connects the angler with childhood; then tying on a surface lure turns me back to a wide-eyed toddler mesmerised by a jack-in-the-box.

There is a reef in Wales where I caught my first bass on the top 13 years ago. It’s a place I try and return for certain sets of tides in the summer – dates that are pencilled in months before in the depth of winter. Visits are somewhat weather dependent, but a few days ago all went to plan and Julian Fox and myself found ourselves bobbing around in the inflatable with 24 hours to fish, waiting for the tide to run. Past experience of this place has taught us the strong flow and the rapidly swallowing ground around the reef discombobulates the bait fish and allows the bass to herd them and attack them. It also provides feeding opportunities for gulls, which pick sandeel or herring fry off the top as the bass strike at their victims from below. At such times the clues as to where the bass are feeding are even obvious enough for us to understand, so we charge around in a state of high excitement, hoping the moment will never end.

Yet as we repeatedly learn, there is far more complexity to how fish behave than we can properly comprehend, and as the tide built the other day there were no gulls and no “bust-ups” and our “predictable” run of fish for some unknown reason was not happening. In such circumstances there is little option to fish anyway. Yet somewhat surprisingly the surface lures still worked really well – although they had to be fished in a different way from normal to be most effective. Rather than subtle upstream casts and gently twitched retrieves that are normally effective, it was rapid walking the dog retrieves so the lure skipped back with the front end barely in the water that brought results. It didn’t even mater if the plug was travelling with or against the strong current. The bass were fired up and the bigger the commotion the better they responded at times. Julian said it felt more like he was back cranking lures for GTs in Australia, rather than plugging for Welsh bass. Yet again we were made aware that there might be generalisations but never rules in bass fishing.

There were however other periods in the tide when normal rules applied and more subtle use of pencil type lures was the only thing that worked. The plug that at such times proved to be the key to success was one carved by my friend Marc Bevan. This beautiful wooden creation sat mostly submerged in the surface film and made little splash when retrieved. As the tide began to flood it took 7 bass, while Julian who did not have anything resembling it caught nothing. I offered him an Orion sticker (a lure that also sits fairly deep in the film) and eventually he took it from me. The swap of plug brought him better fortune. The value of two anglers sat side by side doing different things in order to work out what was working best was once again apparent.

On the next morning’s flood it was Julian’s turn to demonstrate to me what worked. He experimented with a new big “weightless” soft plastic (SP) that we’d added to our arsenal of similar large SPs. When fished subtly and very slowly – in the way that we normally use such lures – it generated no interest. If fished fast though, so it zigzagged beneath the surface film and sometimes broke through and leapt out of the water, his SG “Monster Slug” induced some fierce takes. At 20cm it’s what many would consider a long lure, but even schoolies of 1 ½ pounds were caught on it – which leads you to ponder amongst other things; what size lures a 10 pounder might happily take.

We ended the trip having caught over 25 fish each, with over a third weighing more than 4 pounds, with the biggest two being a skinny (70cm) 6.5 pounder and a feisty 6 pounder. What is more as we fished we were serenaded by skylarks, had squadrons of Manx shearwaters wheel past, and the trip ended with pod of around 10 dolphins cruising by.

I arrived home with a burning need to return very soon. And when I do, no doubt, any newly formed expectations and theories based on this trip will be proved outmoded as the tides bait and bass will have moved on. 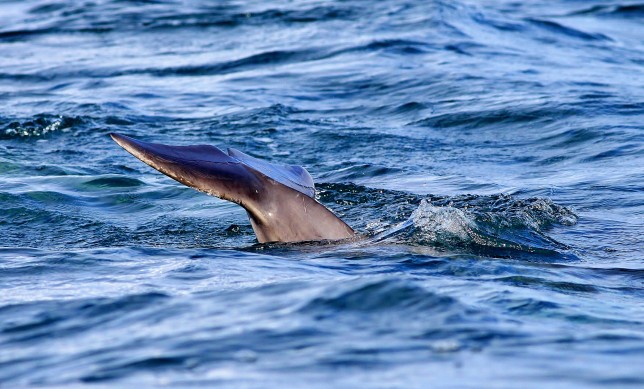