Since moving to Plymouth most of my bass fishing has been on a short section of coast in South Devon. Over four years I have maintained a log of what I have caught, as well as comments from other anglers, and I’m starting to see some clear trends. 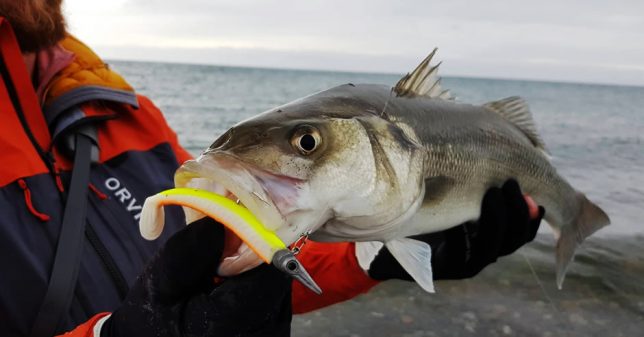 The first concerns fish movements and a possible relationship with the tide. The fish, or groups of fish, quite naturally perhaps, seem to turn up at locations with regularity and perhaps predictability. Given that I fish a stretch of coast of no more than 4 miles, characterized by reefs interspersed by small sandy coves, you would think that it’s all a bass might be looking for. This then raises (and complicates) the old and very important question, “Why would the fish be here and not somewhere else?”

Potential feeding fish appear to move with the prevailing tidal current at a similar speed, roughly equating to 1-2 knots. Whilst this sounds like common sense, it has thrown up some interesting results:

I have now been able to plot a mental map of where I can expect to catch, covering about six hours. I still have a lot of gaps where the shore is inaccessible for the most part, and it is for that reason that I invested in a kayak.

The most revealing aspect of my observations has been the general weather conditions. Irrespective of tide size, be it springs or neaps, it is at the times when the wind strength (and hence sea state) is marginal that my best results have occurred. A case in point was the first real day of generally southerly winds after a week of easterlies; there was a lot of ground swell, and a rock ledge I usually stand on was being washed over quite violently. It was in-the-face stuff and the gully below was a seething cauldron. Despite the diminishing water level (2 to 3 hours after HW), I had to wait until the ‘bassy’ rip opposite the headland I was on had all but gone before the fish actually turned up. This was just as I could have predicted, and I have not caught bass at this mark outside of this time all year. The fish I had did not appear at all deterred by the seal working the same area, which surprised me, because that the seal usually turns up at the same time as myself, and could perhaps confirm my own deductions to some extent. Quite whether the seal feeds on the baitfish that the bass flush out, or on the bass themselves I shall probably never know, but like the bass, the seals have a living to make and are unlikely to be in an area when there is no food about. This is a clear contradiction to the normal anglers’ perception of seals, in that they ruin the fishing by chasing the shoals and taking the odd bite out of the odd fish; all very negative. My view is that the seal is another indicator of fish activity, so why pack up and go?

I’ve also noticed the fishing is generally better just after a period of easterlies rather than strong southwesterlies, as per convention. Easterly gales seldom stir up the bottom and rip up kelp and weed as much as winds from the west on this stretch of coast. This really affects physical aspects of the fishing, as a sea choked with weed is much harder to cover effectively, especially when spinning. This does not automatically mean that there are more or less fish about after an easterly; it means that it can be a whole lot easier to fish.

These changes in weather system are also characterized by a drop or rise in air pressure. Whilst I do not record this information, there are many who see this as an important driver and study it closely. Speaking to a local charter skipper a while ago, he noted also that the first few hours, or a whole tide after a major air pressure event seemed to bring the fish onto the feed, particularly a large drop which very often follows on from a period of easterly weather.

So, is there something new in all of this? Well, not really. It’s simply a case of doing a bit of homework, taking notice of the weather, tide, sea state and the wildlife, and being where the bass are.