She rests gently in my hands, gills ﬂaring slightly as I hold her head into the tide, recovering from the indignity of being measured, weighed and photographed in the arms of a grinning land creature. Her ﬁns stroking the water and her tail waving slowly, she is ready to go, but doesn’t. Perhaps she appreciates the warmth of my hands; maybe she understands my own need to keep surveying her beauty with my eyes, as she masters the current. Fanciful thoughts.

Whatever! My hands are no longer holding her, she stays upright and still. Her body, conditioned by the seas strong currents, is full of power. 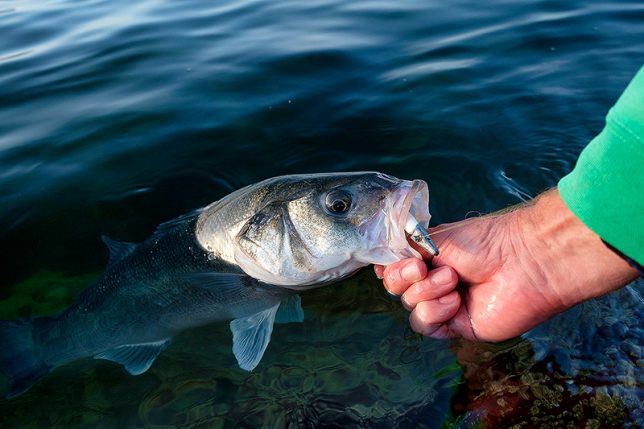 My arms still ache from the effort of playing her as the rod had plunged time and again below the surface. Time and again we battled, me attempting to load line onto my battered centrepin reel, she trying harder to strip it off again. Then the tricks that only mullet seem to know, which had me expecting to lose the ﬁsh at any moment with a slack line and a sense of frustrated wonder. My heart is still beating fast, with a kind of joy that only a fellow angler would understand.

She lifts her body and ﬂicks her tail, and for a moment I feel her power once more as she disappears into the depths. The joy in my heart soars.

I returned her to the sea for somewhat sentimental reasons, but more importantly because at 5lb she is an adult ﬁsh, and important to the renewal of her kind. I would guess that she is somewhere between 12 and 15 years old. She probably spawned for the very ﬁrst time in her tenth year, weighing around 3lb, and that she will spawn only one year in every three from now on. Perhaps we will battle again next season, when she will be bigger, and wiser.

There is a coldness in the morning air, a sign that the summer has ended and soon the mullet will be gone. As I gaze at the water where she swam away, the coldness reaches my heart because like in every year, there will soon be news of a huge by catch of mullet by pair trawlers whilst targeting the shoals of winter spawning bass.

When the email comes this coming winter with the catch expressed in metric tonnes, will her 2.25kg be in the catch weight? Has she really spawned for the very last time?

And what of the spawning bass? These can live some 25 years, perhaps in excess of 20lb, spawning 15 times.

Nowadays many bass will not make it to their ﬁrst spawning, and fewer still to their second and third. For thousands of years the bass have gathered together to spawn, but now technology has found them. Powerful vessels working in pairs, they tow between them a huge monoﬁlament net the size of a cathedral, sweeping up everything in their path.

Nowadays I see inshore ﬁshermen raiding the ‘protected’ nursery areas where the immature bass grow in the estuaries. That makes me angry. But I understand. When the bass nursery areas were established, there was an understanding that if the bass were allowed to grow to spawning size and to return to the open sea, they would come back bigger, and in greater numbers, and inshore ﬁshermen and anglers would reap a richer reward for their restraint.

Now there is a sense of betrayal. Why let the ﬁsh go, only to be taken by those far over the horizon? What is the sense of giving away nature’s gifts to a few men, when they could yield far greater value if protected and allowed to increase, their reward to be reaped by many more men, and with far less destruction?

These thoughts are the coldness in my heart, as I stare into the water where she went. But there are other thoughts that move my heart to a hotter anger.

The thought that as winter approaches, we will again see the carcasses of dolphins washed up on beaches. Intelligent, warm-bloodied and social animals, slaughtered in their hundreds as they too fall victim to the huge nylon nets, dragged at speed so that nothing can escape them.

‘Pinging’ devices and reﬂective markers can deter dolphins from blundering into stationary gill nets, and could be effective on small nets towed behind a small boat. But such devices offer no protection to dolphins against a ﬁne monoﬁlament net, 1.25-mile wide at the mouth and 1/2-mile deep, being dragged through the water at high speed by two powerful vessels; the so-called ‘Wall of death’.

And so the dolphin carcasses come ashore bearing telltale signs of this carnage:

As I gaze out towards the open estuary, I feel a pang of self-recrimination, a guilt that despite my protests last year and the year before, the killing continues. Now the winter has come again, and I’m haunted by the thought that others are making ready to send the trawlers back to the spawning grounds, having done their calculations of expected proﬁts.

Will next year be any different? It will only be different if the politicians and bureaucrats are given the courage to act. They need the comfort of many people behind them to act courageously themselves. They will only ever take action if they feel that the Political Will exists to do something about it. And they will only feel that the Political Will exists when they get a letter from you.

We have just a little time until the next winter slaughter.