What starts it off ?

It’s been a long winter. Research has been done, purchases made, marks scoped-out, trips planned & pb’s envisaged. Now it’s just a question of ‘when’. What’s the trigger though, is it water temperature, is it a particular set of tides, is it the length of the days, is it a question of the right food being present ? Maybe it’s a combination of these factors.

Internet forums, networks of friends, tackle shops and fishing societies (like BASS) allow us to have great visibility of what’s happening around the country, so we can see when things start to happen. This can mean excitement & frustration in equal measure, as it starts ‘to happen’ elsewhere, whilst your local patch hasn’t fired up yet. Or ‘has’ it started, but you just haven’t got it right yet ? These are perhaps some of the thoughts that we all experience at this stage of the season.

Whispers come in that someone has caught a 9lb’er locally (why is it always a 9lb’er ?). But it’s not a verified catch, it’s elusive, it’s not clear who caught it, or when, or where. It was on bait though, it’s always on bait, so that means that ‘they’ are back. It’s worth a go. 3 blanks later it feels like it’s still too early, but now another whisper, another has been caught, on lures they say. Maybe it’s worth another go, maybe I just got it wrong the other evening , maybe I need to buy another lure, or try these soft plastic things?

Another 3 blanks. The rumours have grown faint, maybe they didn’t catch anything, probably just a tackle-shop conspiracy. A picture on a mobile shows one though, but I don’t recognise the spot, it’s too dark, is this a wind-up ? Hopes are raised, maybe a few more sessions, even though the water temperature is just 8 degrees. Blank. Damn.

It’s Saturday morning, bright sunrise, clear water, too clear, too calm. Nice day to be out anyway, feeling some warmth in the sun. 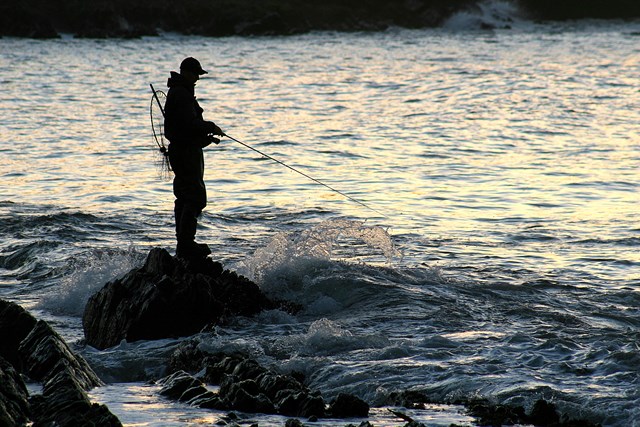 Then the rod straightens, the line slackens. It’s gone.