So What Exactly Is A Striped Bass?

So What Exactly Is A Striped Bass?

The striped bass or ‘striper’ is a relative of the European sea bass, both fish belonging to the Sea Perch family. It is a native fish of the eastern United States from northern Florida to the Gulf of St. Lawrence. It is not related to the largemouth, smallmouth, or the spotted bass of the USA. 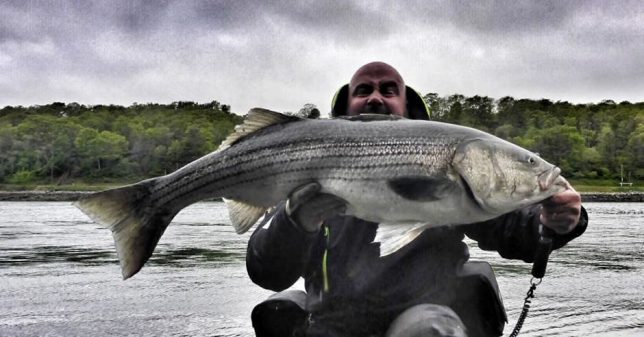 The striper was introduced to the Pacific coast in 1879 by transporting large numbers by rail. Only 435 fish survived the trip and these were released into San Francisco Bay, flourishing into huge stocks stretching from northern Mexico to Washington, providing glorious fishing for anglers and commercial fishers. The commercial fishing pressure increased to such an extent that in 1935 the striper was designated a game-fish with various controls, including a ban on commercial netting for them. Popular venues on the west coast are the Sacramento Delta (west of Stockton), San Francisco Bay, San Joaquin Delta, the beaches each side of the Golden Gate Bridge, the Columbia River, and Coos Bay (Oregon).

For European bass anglers, fishing the east coast will probably be of most interest. In the 1970s commercial pressure heavily reduced the stocks, but a restocking programme and restrictions have redressed the balance. The largest nursery area is Chesapeake Bay, but stripers breed in many estuaries and creeks along the whole eastern seaboard, often up to 50 miles upriver. There are two fish populations, one that stays near the hatchery and goes into semi-hibernation in winter in deep channels, and another that shoals up and migrates to spend the summer in the warm waters of New England, then moving south as the water temperature falls. The move south follows a specific pattern with concentrations (and really big fish) at Cape Cod, the islands of Massachusetts, Rhode Island, Long Island, and Sandy Hook. At Bear Island and Montauk Point the shoals funnel very close on their way south in the autumn. The locals study water temperatures and sea states to predict the various ‘runs’. Other popular venues are Chesapeake Bay (April to May, and October to December), the Hudson River (May to August), and Chappaquiddick (in the fall).

Methods used are similar to those in the United Kingdom, (e.g. flood tide is usually best, seabird activity is a good sign of a feeding area, and plugs, poppers and feathered jigs can be effective in clear moving water). Stripers are very unlikely to be caught in calm water. In the Long Island/New England area trolling is a favourite method, using an umbrella rig fitted with either spoons, feathers or artificial shads. Fly fishing is very popular, with favourites being Herring flies, Snake flies, and Deceivers. The really big stripers are often caught in darkness.

In the early 1980s France and South Carolina devised an exchange programme, for stripers to be bred in a hatchery near Sales, in France, and for the European common bass to be bred in South Carolina. In conjunction with IGFA, 200,000 striper fry were exchanged for 2000 bass fingerlings. Both transfers were completed successfully but very little is known about events since then. A few other introductions have been made, notably stripers to Russia and South Africa.