A dozen times he recast when the bait was fished out and had swung right round to the edge of the surf, each time moving a little way along the beach to cover new ground. As the sun went down there came the semi-darkness and a chill of despondency; in his mind’s eye he saw the great fish swimming away to the west, towards the setting sun. 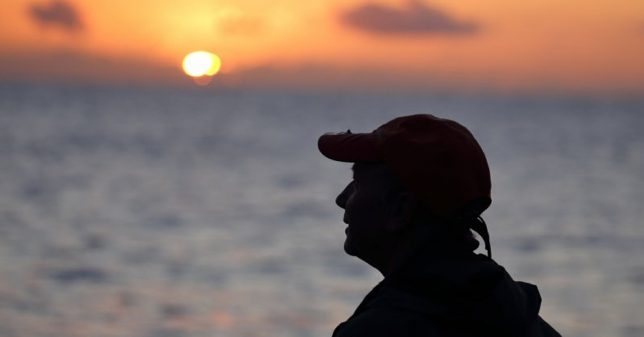 Mora hit the bait when the angler was deep in thought, with a powerful surge that bent the rod tip hard down and nearly tore the rod from his numbed hands. He jumped with shock, called out into the night and turning, ran up the beach and struck to set the hook. “Not too hard” he said to himself and keeping his thumb on the spool he let the fish have its head as it turned out to sea. Line stripped from the reel and the angler tried to assess the size of the fish. A big one, yes, but was it the big one? The power of the fish was enormous, far greater than anything he had known before and the line was still being torn from the reel. The beach was clear of obstructions but he was worried that the lead would foul some weed; he worried about everything. The fish turned and went against the tide putting a huge belly in the line. The strain had the rod bent dangerously, far over, but he could not ease the pressure; he waded deep into the surf in an attempt to follow, but realized the folly of restricting his movements so much and struggled out again, holding the rod high.

The fish bored along the coast, not quickly but remorselessly and he had to follow like a dog on a lead. “It must be the big fish, no other fish could pull like that,” he repeated to himself over and over again. Stumbling along on the sand and pebbles he remembered that further down the strand the breakwaters started; at low water they were clear of the sea but now they would be covered and reaching far out and their vertical stumps would surely snag the line. But now the fish slowed; the strain of swimming against the tide and the towing so much line and tackle was tiring her, but still she went towards the breakwater obstructions. Then she stopped. The angler knew that if she went on again she would be lost. He had to make a decision.

He remembered that the way with salmon is to walk them out of trouble, so he turned and putting the rod over his shoulder, he slowly retraced his steps. “Follow, follow me,” he cried to her. She turned and followed him slowly, and with every step a nightmare he went back along the shore. He gained nearly a hundred yards before she took charge of him again, but she continued to go in the right direction. The angler realized he was sweating and tired; that run had taken him over half a mile along the shore and now he was retracing every agonising step. The fight went on for what seemed like hours, as the fish took him up and then back down the shoreline.

The fish was still far out and by the feel of the spool under his thumb he had still to recover more than 200 yards of line. She went forward in surges now, getting closer to the line of surf. He felt that some of the power had gone out of her and that he was winning, but his joy at this was tempered by the fear that the strained tackle might part or the hook pull out. He eased the strain a little so that if she made another sudden dash she would not break him. Slowly he won back line and felt the spool filling up; the fish was beaten but now was the most dangerous time of all, when he had to get her through the surf. He had not seen her yet and resisted the temptation of getting her on a short line amongst the breakers; instead he backed up the beach and eased her in on the waves. He thought he saw her in the moonlight and heard the slap of her tail on the surface. The undertow dragged the dead-weight back from him, but slowly the waves cast her up on the shore. He saw her now lying on amid the stones and weed and dropping his rod, he ran to her. Kneeling on the sand he lifted her great body in his arms and carried her up the beach to safety.

Running to his haversack he took out his torch, spring balance and priest. He gasped when he saw her size in the light of the lamp, the tag still attached. He could scarcely lift her with the spring balance, which thumped hard down to its 15lb limit. “She must be over the record,” he said quietly. He took the priest and gave her the coup de grace.

Alone in the darkness he sat beside her, drinking the warming coffee from his flask, unable to take his eyes from every detail of her. Then, with feelings of emotion and an overwhelming tiredness, he took her again into his arms and carried her away from the sea, forever.