Bass eat a lot of ﬁsh, crab, prawns and other active animals. The best way to deceive a ﬁsh is to present a natural livebait on simple freelined tackle. However, natural bait is not always easy or cheap to come by, so an effective artiﬁcial can be a good alternative. On those rare occasions when bass are ‘mad on’, or ‘passing through at speed’, it is much quicker to use an artiﬁcial, because there is no time lost in baiting up. If the ﬁsh are scattered over miles of shoreline, it’s easier to search for them by casting and retrieving a lure as you move along. Thirdly and perhaps surprisingly, some types of imitation ﬁsh are less prone to snagging than most bait rigs. 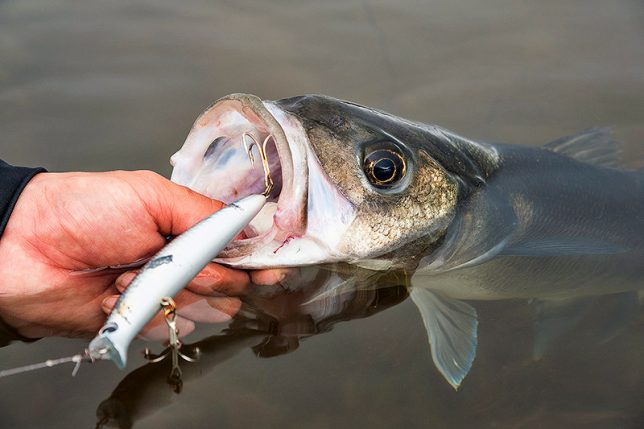 Essentially anywhere that you think there could be bass, you should ﬁsh with lures. Over sand, gravel, rock, weed or in open water. From the very margin of the sea to offshore reefs and wrecks. At any state of the tide. At most times of the year, although April to the end of November is the prime period. Obviously success will depend on whether there are any bass present. From my local shores big ﬁsh are most often taken at the extreme beginning and end of the season. As a fairly general rule, in Dorset, I fish rocky beaches, ledges and headlands on spring tides, and gravel beaches and bays on neaps. Any conditions from ﬂat calm/gin-clear to force eight/white water will be OK. Even quite dirty water is not a total dead loss, but it is not ideal.

A ﬁxed-spool reel in 3000 or 4000 size is by far the most versatile. The cheapest models are rarely the best but anything with a smooth clutch and reasonable level wind will be alright. I am not the one to ask about makes and models of tackle – as long as it works I use it. If you want to you can give the reel a wash after every trip – I don’t bother but my gear is never put away in a bag, box or car boot. Made up rods and reels are propped up in the corner of the room where I am writing this and even non-saltwater-proof reels last a few years under these conditions (although they don’t always look pretty). These days I use a 4000-size ﬁxed spool reel which is excellent.

Load the spool almost to the brim with line. I use 8lb mono or 20lb braid. Don’t overﬁll or you will have to cut a few yards off when it tangles on the cast. If you are using braid it is even more important not to overﬁll. If you are new to spinning, and want to use only big lures or you think that your beaches are snaggier than mine (they will not be) – step up to 10lb mono or, say, 30lb braid.

In the past my favorite rods have been 11ft, 1.75lb test curve ‘carp’ type, through-action blanks, but I now use an 11ft ‘spinning’ rod. (That there are now many such rods on the market is testament to the fact that tackle manufacturers eventually do get the message from anglers). Any spinning rod of your choice will do, but it must be sufﬁciently forgiving for (knotted) 8lb mono and stiff enough to set the hooks against the tough mouth of a bass and the water resistance of a bulky lure. I feel that such a rod gives me good lure/ﬁsh control amid waves, weeds and boulders.

Now all you need are a few lures. First let me say that these are not cheap, but compared to the cost of bait they should be no problem. Lures last for ages if you don’t lose them. I used to tie the smallest link swivel to the end of my line using a half-blood knot, but I now tie direct if using braid, or tie a loop if using nylon. TEST EVERY KNOT! Attach the lure, sharpen the hooks, and away you go. If you want to change the hooks use good quality trebles, not too thick in the wire (the idea is to sink them easily into a ﬁsh, not to anchor the QE2).

Lures you should take

I like to carry a couple of each basic type but rarely is that the case. My bag usually has the following in it:

There are lots of other lures which will catch bass and some are very good (shads and other ‘rubbers’, Bass Bullets, Mepps, etc.) but you don’t have to carry an entire tackle shop with you.

If you are new to lure ﬁshing for bass or are covering new ground, then you could lose two or three plugs on your ﬁrst session, but try not to feel bad about it. With practice and experience losses will become smaller in time. My average loss rate is about one or two per season (in snags not in ﬁsh). If you are hard up then you could settle for just a couple of J11s and not go far wrong, or you could make your own from balsa at a fraction of the price (see the book Operation Sea Angler – Chapter 7). DIY plugs have the advantage that you can customize the weight, shape, colour and depth of dive to your needs – it’s easy and they do work.

There are many other good makes of buoyant plugs. Most reputable types are O.K. but there really is no need to carry a suitcase full of plastic and balsa. If your coastline is steep and deep, it may be worth experimenting with some deeper divers (which have the vane at an angle nearer to the horizontal).

Just one or two more thoughts. Don’t be afraid to ﬁsh in shallow water (1-2 foot deep), over rock and weed, in rough weather or close in by standing back up the beach and ﬂicking the lure a few yards out. Reel in just fast enough to make the lure work (say one turn of the handle per second). THIS WILL CATCH BASS. Surface poppers are effective when retrieved with jerks and pauses. When you gain conﬁdence you can improvise with fast/slow or fancy retrieves. Keep your eyes peeled for signs of ﬁsh activity (splashes, ﬂashes, swirls, tails, ﬁns, shapes and shadows, explosions of little fish, diving terns, gulls, guillemots, razorbills etc.).

That’s about it. If you are completely new to lure ﬁshing, it might be best to start with mono, and go over to braid once you have got the feel of casting and retrieving without too many losses. Eventually you WILL catch ﬁsh and this should make you conﬁdent enough to ﬁsh even closer to snags, weed etc.

Historical note: This article was published in BASS magazine no.94 Summer 2000