At a B.A.S.S. AGM we watched a presentation on fishing for striped bass in the USA. We were so impressed we decided to go over and have a try. Now that we have been, we’d like to share some of the tips and experiences we found.

We had arranged to fish Cape Cod for one week and then go on to Connecticut to meet up with striper fanatic Bob Sampson. Landfall was made at Boston Airport, and having picked up our Trailblazer vehicle we set out. However, our first experience of the USA was the road works – and big time! It took us 3 hours to travel 71 miles, but we learnt something even from this, i.e. don’t drive from Boston, fly instead – it’s much less hassle. 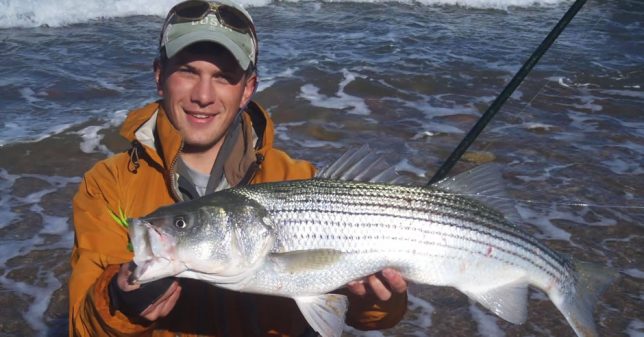 For fishing the shore on the Cape a guide is a must, as we found out to our cost (second lesson). Without one you are fishing blind and it’s a very large place! The local tackle shops tell you where to fish … what they don’t say is to fish at night. The best place for tackle is WallMart or Supermarkets – these are half the price of the local tackle shops.

Bait fishing on the beaches is difficult due to crabs, and talk about large! Baits last about one minute.

On the Cape the only place we caught fish was in 2 large State Parks, one of about 350 lakes and ponds. We caught bass, perch, trout, bluegills and catfish.

Week two and we moved on to Connecticut, meeting up with Bob at Bear Island. His boat was a 20 foot Lund Aluminium with a 75hp outboard. Bob told us that we would be fishing an island about 15 miles away. What he didn’t warn us about was the speed we’d go! We must have nearly flown – I swear we made the mark in fifteen minutes.

We rigged up for trolling with ‘tubes’ tipped with worms, the tubes being similar to rubber eels but 15 inches long. These were dropped over the side and about 150 feet of line was let out. Before we could engage the reels we both had a very large bass on. “Just small ones” said Bod.

On the way back in we saw birds working. We rigged up with shads and cast towards the bass, which we could see right on the surface. It was tremendously exciting, and one or two of the bass nearly got into the boat as they chased after our lures. When the fish hit they stopped you dead in the water. What fishing! We caught over 38 bass that day the best being 15lb.

The following day we went after ‘fluke’. We caught about 20 of these with the biggest being about 8lb, all on light tackle (8lb line). Later we did some more bass fishing.

All in all a fantastic trip. We caught more bass in three days than in all our angling trips put together.