It was a dull and drizzly day. I had gone down to my boat to do a couple of jobs on it. I thought that if the work was straight forward I might have time for a bit of ﬁshing. There was a chance of a few whiting or an odd codling in the area, which is Harwich harbour, where the Rivers Stour and Orwell meet. I had brought a 1lb box of calamari squid along, just in case. 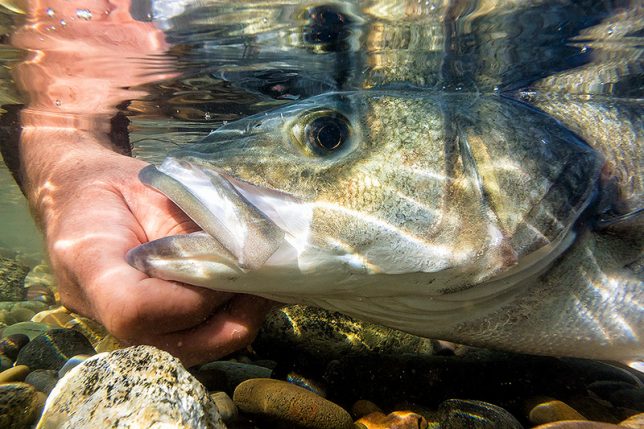 I got on with the work and it was completed by about 11.00am. A southeasterly four to ﬁve knot wind was blowing into the harbour, and there was a rising tide. I decided to give the ﬁshing a go, though I did not really expect to catch much.

At this time of year in earlier seasons, I have, on a couple of occasions, been ‘snapped up’ by what I took to be big bass. Each time, with me completely unprepared, the bass had taken a self-hooked whiting or pout. I had failed to land any of them. With this in mind, I decided to be prepared, and set up one rod to deliberately ﬁsh a livebait. The terminal tackle was a 6/0 hook with a smaller hook tied close to it.

Somewhat over an hour later, and with the tide nearly at high water, I had caught about twenty whiting. The livebait rod sat motionless. I called up the marina to see if they were on Free Flow (when both lock gates are open and boats can go straight in and out). Today was one of those days. Of the squid that I had brought, there was just one left in the box. I decided to put it on whole, give it ﬁfteen minutes and if, as I expected, there was no response, I would then go straight back in. I cast this last squid uptide, let out a bow of line, sat back sipping my cup of coffee, and watched the shipping go by.

I was using a self-hooking arrangement that consists of a 6oz ﬁxed wired lead attached by a link swivel to the end of a piece 18lb monoﬁlament. Up from that I had a short French boom and off this a six foot trace of 20lb monoﬁlament. At the end of this came the 6/0 Pennell rig. Watching the rod closely, I saw it move, once, and then a second time. It was not a large movement, in fact not much more than caused by the earlier whiting. I decide to reel in, and then make my way back. I took up the bow of line and felt the lead come off the bottom. Right away it felt heavy, and began getting heavier as the ﬁsh went downtide behind the boat. I thought it must be an early cod, or perhaps even a clump of weed. Then suddenly it woke up! Luckily the clutch was properly set because the ﬁsh made a determined run and stripped off 30 yards of line. It was staying deep. I knew it was a good fish and a bass at that! 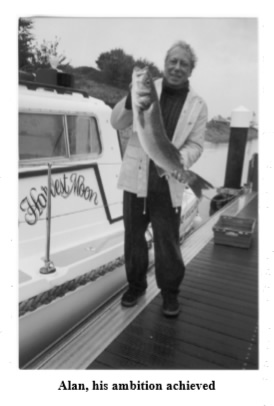 After the ﬁsh had made several powerful runs it came to the surface and swirled. I could hardly believe it. After ten years of trying for a double, the thought of catching one has become something of an obsession for me, or so my wife keeps telling me! I have spent countless hours anchored in favourite spots in the River Stour when the tides were right, the sun coming up and mist rising off the water. Ideal times you may think, but that double ﬁgure bass always has eluded me, until now, when I was not really seriously ﬁshing for bass!

As soon as I saw the ﬁsh swirl again I knew it was over 10lb, and I hoped that my tackle would hold. As the reel hummed away again when the ﬁsh saw the net, I thought to myself that it would be just my luck for the hook to come out now. I was cursing myself for not having checked the line before I started ﬁshing, but in the end everything held together. Struggling with the net in one hand, and attempting to control the ﬁsh with the other, and once having it halfway into the net only for it to slide out again, I ﬁnally got the net behind it and let the tide take it in.

Yes! I sat there for a few minutes looking at this bass, far bigger than any I had been close to before, and when the scales went round to 12lb 12oz, it felt like winning the lottery. All the hours spent planning trips and gathering bait, and here I was with a 1lb box of squid that I had taken out ‘just in case’, but the thing that really struck me most was the fact that ﬁve minutes later I would have upped anchor and been gone.

Now I had this wonderful bass I had to decide what to do with it. It looked so beautiful lying there. Part of me wanted to put it back and watch it swim away, but I also thought about the ten years it had taken me to catch it. I thought of all the time and effort, not to mention the expense, I had put in. I decided that it was the ﬁsh of a lifetime and I would have it set up whatever the cost. It is being done as I write this. However, I know in my heart that if I am lucky to catch another perhaps bigger one, I will put it back.