The following four-part story originally appeared in ‘Angling’ magazine in 1973. Some of the biological material is not quite correct in the light of scientific knowledge gained since then, from research into spawning, movements etc.

Turning towards the river mouth she swam easily on the slack tide, instinctively following the outer perimeter of the bends of the old river course, as she had always done when feeding on the small crabs and flatfish.

But now she took little notice of them as they scuttled away at her approach, being too preoccupied with her desire to get out to the reef which lay three miles up the coast. By the time she reached the bar the tide had started to ebb. Sandeels flashed past, diving for the sanctuary of the moving sand. Occasionally Mora snapped at one that came too close, but not in any way to satisfy hunger, for she had felt no desire to feed for over a week now. 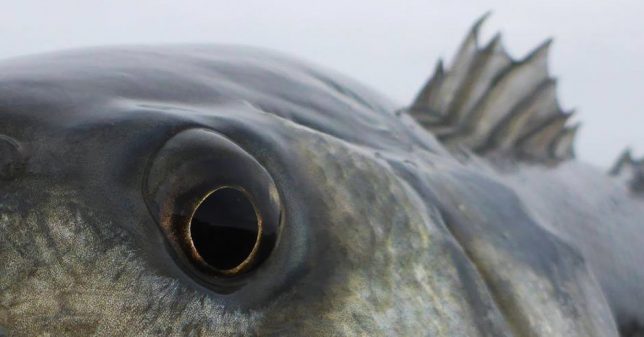 Once away from the estuary she turned north towards the reef, following the coastline and now having to swim against the increasing flow of the tide. The mullet shoals were quietly working the small patches of stone on the sandy sea-bed, feeding on the green ribbon weed and tiny mussels. They took little notice of her as she swam amongst them; bass and mullet often swim together when feeding shoals find common pastures. These mullet were very cautious and at the least hint of danger would move away to safety. Bass made use of these watchdog abilities and found safety amongst them. Mora had been saved from death more than once by their alarm signals.

The moon was still up and as she swam in the calm clear water, quietly rippled by a gentle southerly wind, Mora knew that she would arrive at the reef as the first grey light of the fine dawn began to show over the land mountains to the east. As she neared her destination an excitement and thrill began to make her whole body quiver as every nerve told of a new experience in her life.

The reef was where she had been born six years before, and now as a mature bass she was returning for her first courtship, and to join the thousands of her species who came every year at this time to spawn and so maintain the tenuous thread of the survival of her kind in this, the most cruelly severe element, where only the fittest lived to breed. Her species, particularly amongst sea fishes, had to fight a long hard battle, for it was not generally before the age of six years that they reached maturity. Fortunately, at the other end of the scale nature has given them the bonus of longevity and Mora’s mother had reached the age of 25 years and weighed 15lb.

Mora’s mother had survived many dangers and bore the scars of an early encounter with Grypus, the grey seal. Even as a big fish she had not been immune from the larger predators and had fallen, finally, nearly two years after Mora’s birth, to the wiles of the greatest of predators; the upright ones who hunted often in the sea for the treasured prize of the most silver of all sea fish.

Mora had never known her mother, although she had nearly been killed by her when, as a youngster and swimming happily in crystal waters of the bay with her minuscule companions of the school, they had been ruthlessly attacked by a shoal of large fish, of which her mother had been the largest and most fierce. This ordeal and many others she had lived through to grow to her present stage of maturity. Mora still weighed less than 2lb, and unless she was constantly on her guard would fall victim to the countless hungry mouths ever present and often cunningly camouflaged to deceive the unwary.

Mora neared the reef, and could detect the turbulent water ahead through the nerve sensors of her lateral line. Excitement grew as she approached the familiar area. Almost every day she would forage among the weeds of the reef, and along the nearby causeway which harboured so many of the small creatures upon which she prayed, but on this day they were safe, for the purpose of her visit was to find a mate and shed her eggs.

The water from the mouth of the estuary had been summer-clear but as soon as she came within sight of the great weed and mussel covered boulders scattered in the sand on the outlying edges of the reef, Mora noticed that, in the growing light of the dawn, the water seemed a little opaque and milky. The dark silhouette of the main reef was alive with fish, their silver flanks flashing as they turned and cavorted amongst the weed fronds. Caught up in the excitement Mora swam more swiftly towards the melee.

The mood of the already spawning fish was infectious and she noticed that with the bass there were mullet, sea trout, garfish and pollack, all swimming to and fro, darting around the rocks as if to urge on the participants of the play. Mora became aware too of large shapes, whose purpose was more sinister.

Grypus, having left his rest rock at high tide, sensed the activity and was now enjoying the easy picking of the sea trout, who, along with the other fish, were themselves feeding on the very spawn that was being swept along in the tidal run. Eugaleus, the tope, recently arrived inshore after a winter spent in the deeps, was slashing in a frenzy at the smaller fish in an effort to appease his insatiable greed. Careless of these hazards in her nuptial moment, Mora was now in the centre of the excited throng. Two males, smaller than she ranged on either side of her flanks and began to nudge her belly and sides. Mora turned on them angrily and they sheered off, only to return moments later with more caution.

Mora was conscious of a gnawing pain which came through in the excitement of the moment. Her gonads were full with spawn and her belly was sensitive to the rough advances of the ardent males. The sea water passing through her mouth and over her gill rakers was slightly bitter to her taste and the more she swam in the tumult of fish the more she became unable to control her own destiny. Almost as if drugged she turned on her side and, swimming to the sea-bed, rubbed her aching flanks in the sand. Time after time her attendant males, bolder now, stroked and nudged her.

In an ecstasy she started to shed her eggs, slowly at first. The males closed to her side and as the eggs fell away from her to drift downtide. Their milt, clouding the water, fertilised most of them as they were released. After an hour Mora was almost spent and exhausted, drifting away by the gentle run of the water, carrying with her progeny back towards the estuary. Little heeding the hurrying combatants passing her on their way up to the battlefield that she had just left, she sank to the bottom and allowed herself to be swept along on the last of the ebb. Her eggs, each with its now quickened embryo, floated near the surface to be carried at the whim of wind and tide until the warming sun completed the cycle.

She still had some eggs in her belly, and when they had ripened, she would shed those, too, when she met another mate.