Six years before, on a sunny June day, the bubble of life that was the infant Mora had drifted near the surface of the sparkling, living sea and became a tiny part of the foundation of all life in the oceans, a tiny speck of plankton, a drifter.

With the coming of the early summer sun that warmed the shallow sea there happened, every year, the great miracle of the start of new life, Photosynthesis set the waters alive with phytoplankton, the vegetable pastures which were to be the life support system of the countless billions of predatory zooplankton, which, during the following months would graze upon the rich harvest. Many of the tiny creatures would never grow beyond this stage and as time passed would fall victim to the larvae that daily grew larger to become, in due time, the fishes, crabs and other creatures of the deeps. Few at this stage are distinguishable in the form of the adult; the infant crabs resemble the heads of armoured battle horses of old, with noses long and pointed like the lance of the jousting knight. Some are quaint and having reached the form of a miniature fish commence a stage of disfigurement, like the tiny plaice, and other flatfish. No sooner do they start swimming upright like normal fishes, when one eye, seemingly being lonely, moves around the head to be near the other, and the wee fish suffers the inconvenience of being unable to see anything on the blind side. This, in the ocean, leads to a very short life and so nature ordains that these fish start to swim on their sides and at the same time take up residence on the bottom of the sea. 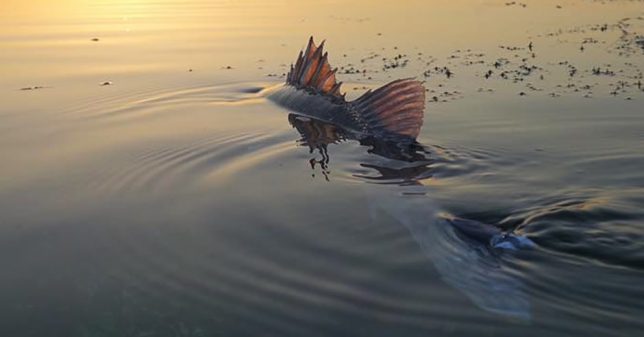 After six days of drifting in the warm sea Mora was growing too large for the tiny membrane which encased her and by continually wriggling within the egg she finally broke away from her prison to emerge, tail first, into the perilous element that was to support her through many adventures of her life. This tiny creature, possessed only of the will to survive, and nourished for the first few days by the yolk-sac hanging balloon-like beneath her body (restricting her movement until it was absorbed) and until the instinct to feed upon her neighbours took her on to the next stage of development.

As the summer wore on Mora grew until, when she was two inches long she had become a perfect bass in miniature and sought the company of her kin to swim in a school. No longer drifting at the whim of the tide the school swam in a close phalanx in search of food. When danger threatened the school formed into a tight ball, or pill, to present the smallest area of their attackers. Mora grew more quickly than some of her companions and was always able to force her way into the centre of the pill for added protection, turning and weaving in unison with the school and keeping, station with the fish on her flank.

These were days of exploration and adventure as the school swam into the estuary from the open sea to feed on the mudbanks and sandbars. Savouring for the first time, the flavour of fresh water coming down from the rain-washed hills, and the taste of peat when the freshets brought the washings from the heather down to be swept out into the bay to excite the migrating salmon and sea trout. Mora was frightened the first time she tasted the brackish water and her body reacted painfully with the adjustment to the change in salinity.

The feed in the estuary and farther up in the warm shallow broad water was rich and for the first time Mora wrestled with the worms which came up from their homes in the mud, pushing their heads out to filter the passing plankton. She would dart her mouth into the soft mud and grip the head of a worm, vigorously pulling with all her tiny might to lever the succulent morsel from its sanctuary.

Others were hunting in these waters and Mora, intent on her struggle with the worms, once nearly fell victim to Croco, the cormorant who came every day to ravage the small flounders that sunned themselves in the warm shallows of the creeks. Croco lived up at Bird Rock where he and his ancestors for a thousand years had colonised the rocky outcrop farther up the valley. The granite spur, contrasting against the dark surrounding hills, was white with guano from the generations of birds that had lived and nested there. Every day at dawn they would flight out to feed, flying high over the land and coming down over the water to wing low near the surface to their chosen fishing grounds. Ungainly in flight they became graceful and efficient swimmers, turning and darting near the sea-bed to frighten the small fish and eels that are their prey.

When Croco had dived near the school they scattered at the vibrations when the bird submerged. Twisting and turning Croco cut out some of Mora’s companions, taking a few and swallowing them underwater. Mora dived for the weed that was growing from the stones near the shoreline. Croco gave up the pursuit of the little bass and concentrated on the flounders that were lying in the mud. Hidden by their camouflage they matched the bottom perfectly, only their eyes showing, but when they saw Croco approach they panicked and with a telltale flurry of mud they sped away in an attempt to escape. Croco was looking for the mud clouds and with his long neck outstretched he turned and took the flatfish in his beak.

Coming up for air and then down again, he fished until his crop was bulging; then with the heavy effort of a laden bomber slowly took wing back to Bird Rock to disgorge the gastric-softened meal to the nestlings.

When Mora had taken to the weeds she found to her delight a favourite source of food in the form of tiny shrimps and sea slaters; the sun-warmed weed was full of them. Some were too large for her to swallow but she fed avidly on the smaller ones. Near one large stone she came across a small crab, different from those she had seen before, which reared up and would attack her. This one lay quite still, partly buried in the mud and showing none of the usual fight. She moved in closer and nudging it, discovered that it was soft.

This was the first time Mora had seen a soft-backed crab and she did not know that during the warm season all the crabs would shed their hard shell in order that they might grow. When the time came for this to happen the crabs seek the sanctuary of rock or weed for safety during this period of great vulnerability. The shell, in the course of a few days, becomes brittle and then as the body expands the shell splits and falls away to reveal a creature as soft as jelly and utterly defenceless. Quickly the skin hardens and in time the new, enlarged crab is again able to go move on and seek the toes of small boys. It is during this time of shedding that the roving cock crab finds and mates with the soft hen crab, the female being carried beneath the male and afforded protection by him.

Mora paid considerable attention to her new-found food source and knew that here was a staple diet for the future. She had taken the tiny pea crabs, which were to be found amongst the rocks but their shells were always hard. Tugging at the inert mass Mora managed to tear away part of the claw and finding it to her liking she continued to feed on the ragged crab until her appetite was satisfied and, leaving the mangled remains, she returned to the school.

Seasons were to come and go and with the passing of each Mora grew larger and more able to avoid the many hazards that had so drastically reduced the school, so that now only a few remained with her. From time to time they joined remnants of other schools so that the numbers were maintained to give the same degree of protection.

For the first early years Mora’s school had kept close to the shore, feeding in the estuary and in the littoral zone, seldom travelling far along the coastline. But the time came for them to venture into the deeper parts of the sea and so, during a very calm spell when the water was so clear that it was not safe in the shallows, Mora led the school away from the nursery and into the unknown waters far out on the reef.