I have fished with many people over the years, some in freshwater, some in the salt and others in both.  But until relatively recently all of these people have been anglers.

My brother-in-law Alex had never fished at all, not even a mackerel trip whilst on holiday, when he declared an interest in having a go at a spot of angling.  At this time I was still course fishing so decided to take him and my father-in-law to my local club lake one afternoon, where I could guarantee a hatful of carp for both of my apprentices using a short pole.

I got the fish feeding nicely and demonstrated to them the feed – put in – bite – strike and fish-on approach that makes pole fishing a great place to start.  Alex was first up and got it all right until it came to playing the carp that he almost immediately hooked into.  “Let the elastic do the work” I told him, “that’s perfect” I said as the fish began to tire.  “Now lift the fish” I commanded wanting Alex to put a little upward pressure to bring it to the surface in preparation for netting.  All looked good as the carp came up to the surface but it didn’t stop there as I wanted, oh no, it continued up and up until most of this 4-5lb lump was out of the water.  “No! Not out the bl**dy water” I screamed expecting to hear the pole break at any point.

The reason I mention the above, is that during this first attempt it became clear to me just how much is involved in getting someone fishing competently and there is much more to teach than you may first think.

A few years on from the carp lake incident and I am totally addicted to bass fishing with lures and Alex is also really keen.  Our families holiday together every year and this particular year was to be no different except that Alex and I were very specific about where we would like to go, unlike previous years.  We were not worried too much about the accommodation per se, just its proximity to the sea and we wanted to go a little later than May, our normal holidaying month.

When we arrived in Wales we were delighted that the beach, and more importantly the rocks, were within easy walking distance.  “What are the chances” we declared to the family as we unpacked our tackle from the cars.  Alex had acquired a few lures in the build up to the holiday and I had a few to pass on to him myself.  In fact, just a few weeks before the holiday Alex found himself in Singapore on business.  During his trip I received a phone call to say that he was in a tackle shop and they had many, many lures.  Over the crackly connection I told him some lures to look out for and gave him a generic description of a shallow diver, 100-130mm, 15-25g and diving to no more than 3’ish as these were likely to suit where I was fishing at the time.

After dinner on the first night of the holiday and with much anticipation, Alex and I looked over the lures he had brought back from his travels.  “Oh my” was my remark (it wasn’t really but I can’t blog what I really said can I?) as I looked at an array of tropical poppers and a lure that dived down to around 50 fathoms.  Recovering my composure I noticed in amongst these beasts lay a pair of Rapala Max Raps, a lure that I had been keen to get hold of and try out.

Come the final morning of the holiday, Alex and I were up and fishing before dawn, full of 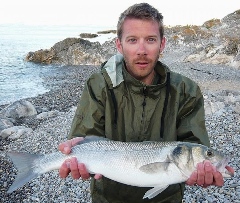 anticipation and a little regret that this was to be our last session.  Conditions had steadily improved over the week and I had caught over half a dozen fish in the preceding few days but I had also managed to lose a good one and snap my travel rod.  Alex was improving no end with his casting distance, but more importantly his accuracy and had managed his first lure caught fish, which was a large Gurnard, from a heavily populated beach, in the middle of the afternoon on a wedge!  He was still chasing his first ever bass to a lure. 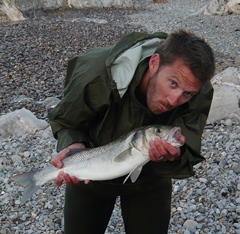 Just as dawn was breaking that final morning, and in an area that had produced a few fish for me, my new Rapala got hit hard after only a few turns of the reel handle.  It was immediately obvious to me that I was in to a good one; certainly a pb (not difficult as I was less than 6 months in to my bass fishing at this time) and she didn’t want to meet me anytime soon.  I whistled to Alex and he came to heel very quickly armed with his video camera and captured me landing, unhooking and weighing a beautiful fish perfectly.

What Alex did next was not something I had taught him but filled me with hope that he would make a good angler and also made me want to kick him up the ass.  As I walked back up the shingle to my kit following the release of my fish, Alex marched into “my spot”, 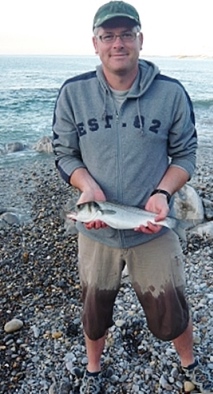 slung out his Rapala and hooked into a bass.  Resisting the urge to explain angling etiquette to him, I instead picked up the camera and returned the favour of filming this most momentous of occasions.  Whilst videoing, I offered Alex some gentle words of encouragement as he played a lively bass towards the shore.  It was at this point that I noticed he didn’t appear to want to stop reeling in, and the fish was on a collision course with the tip eye of his rod which was bending alarmingly!  It was Déjà vu, as I again shouted “don’t lift the bl**dy fish out the water” and then had to move as quickly as I could along the shore to get some line between rod tip and fish.  I got there in the nick of time and all ended well with Alex landing his first ever lure-caught bass.  My filming (and commentary) left a lot to be desired though.

Later that same year the family was drawn together in Devon to scatter the ashes of our father-in-law who passed away at the end of the previous year.  With the serious business a few days away, Alex and I ventured out for an evening session with expectations high.  The morning before I had taken 5 in a short space of time but family arrangements had ended that session before Alex could get one.  This time we had no commitments and the previous session had eased Alex back into the swing of things very nicely, as he had not fished since our holiday.  We surveyed the water as light was just starting to fade.  Alex decided on a particular gully to fish and commented that he didn’t feel he had a lure that ran shallow enough to fish it effectively so selected one of my Feed Shallows and marched off over the rocks.  This was new.  We normally fished within earshot and I would keep an eye on what he was doing and try and offer advice if needed.

I set about the water in front of me, waiting for the inevitable hit that never came.  “They were here yesterday” I said to myself as I turned to see what Alex was up to.  His rod was up but stationary “the end of that Feed Shallow” I thought as I turned back and carried on.  A few minutes later and Alex is walking back along the gully in an attempt to get the lure off of the snag.  I decided I would join him in his game since I had not had a sniff of a fish.  As I started up the gully I saw the extent of Alex’s snag, a bass of about 3lb that he was just about to unhook.  Get in there!  My sole contribution was to unhook and release the fish; the rest was all down to Alex.  The one thing neither of us did was get a photograph of the fish!  As the excitement started to ease I realised that I was still blanking and, as such was, being beaten by my student. 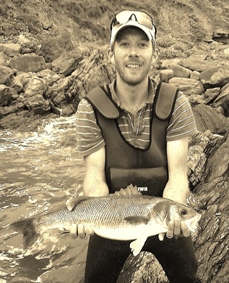 I was very quickly back at it and contemplating a large dose of micky-taking by the whole family (it would have been totally justified as I do like to indulge in a little myself) if I blanked.  Luckily a bass took pity on me and saved my blushes.  In spite of a poor fight (lack of one really) I was soon holding a bass a little over 6lb and we both went home with pretty big smiles.

I have really enjoyed teaching a novice.  It can be a little taxing and can limit your own time with lure-in-water but the sense of satisfaction in seeing your guidance come good in the form of a rod bent into a bass is quite something.