Weaving across the road networks before navigating through the smaller towns, following the prominently displayed event signs and eventually car parking areas. Arriving early among the parked vehicles on the fields with some people already lighting up stoves or munching through BBQ breakfasts ,the aroma of hot food and drinks on the chilled early morning air has some already regretting not packing the Kelly kettle or stove .It’s a little better once inside the actual event, as the numerous catering trailers and stalls are all firing up preparing hot food, tempting the weary early arrivals, later in the day it’s all ice creams warm beers or fizzy drinks 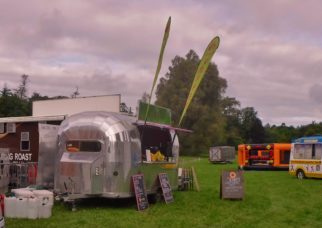 Seeing new ideas or products, it’s often at fairs or shows we can get to actually see a number of products that maybe had only been advertised of late, and obviously its far easier to assess the items rather than just as magazine adverts or on the internet.

It’s not easy to avoid the temptations of all the rods, reels, and lures, almost calling out “buy me”. Perhaps it’s the fresh air and buzz of the crowds, or the sunlight glinting off the cunningly placed displays as if hypnotised by such treasures, that’s just part of the temptation, then the array of landing nets and angling bags of all shapes and sizes something for every occasion. It’s not easy to resist and unless sporting blinkers the array of head wear, sunglasses and fly or lure vests is almost too much. 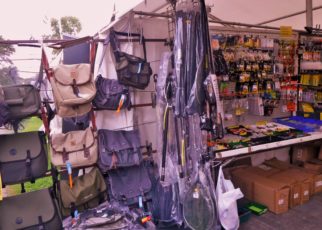 What angler doesn’t like books of some sort, be they specialist tactics, new, second-hand or rarities. Again, its get in the book stalls early, brace your shoulders and keep others at bay until having scanned the book cases, while simultaneously grabbing one or two eye-catching titles to flick through. Not putting anything down, unless it’s really of no interest, in case another’s swift hand swipes it away never to be seen again. For anyone interested in books featuring bass this older post Reading About Bass is still well worth a look. 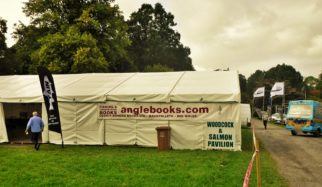 Then it’s the clothing, boots and various apparel from the small stalls to huge bustling marquees. Often the heat alone is enough to induce an immediate about- turn and retreat, yet often that’s already too late if more than a couple of paces inside, as the flow of people keeps pushing you through the rows of clothing and paraphernalia, until either finding something of interest or staggering out the exit into fresh air and daylight once more.

With bargains being offered in all directions, its often still worth haggling the price a bit further. The only downside sometimes being that it’s possible to get caught up in the moment, and purchase something that was not exactly required, but the deals struck and it feels like a steal at the time. 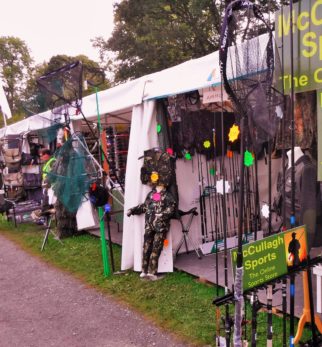 By the afternoon it’s at least a second visit to view angling related artwork, much of the skill among the angling and wildlife artists is so very high, it’s a privilege to just stand and view before deciding further on speculating. Then a quick hunt for angling DVDs often found at reduced prices for cash, or a steal if purchasing several from the back of a van.

Not forgetting the stalls of angling organisations, conservation projects and areas with some interesting taxidermy, then there’s boats plus electronics and safety equipment. Anyone with an appetite for an angling event could consider “The European Sport Fishing Show 28–29th OCT 2017 ” BASS members will find a thread on the members only forum with details and who is attending.

Do you have some news for BASS to share or something for the BASS-blog, click Here to contact me direct via the forum with any potential items. 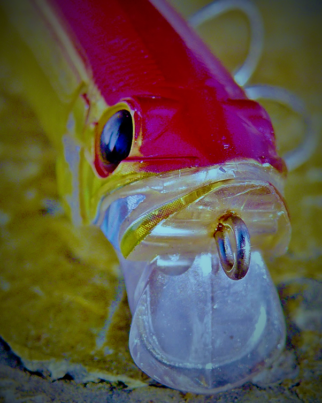