No single topic related to bass management has created as much controversy as Minimum Landing Size (MLS) or Minimum Conservation Reference Size (MCRS) as it is now referred to. 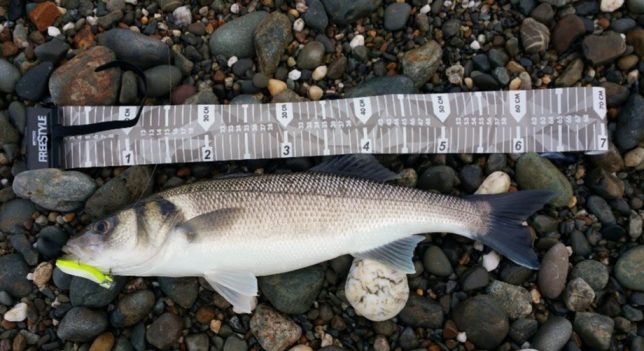 As long ago as 1973, Recreational sea anglers formed the Bass Angling Sportfishing Society (BASS)  to try and persuade fisheries managers to adopt a more conservation orientated approach to managing the species that has since time immemorial been a favourite species of recreational anglers, but which by the mid seventies was attracting increased attention from commercial fishing. This interest was stimulated primarily due to declining stocks of other more traditional species and also relatively high prices for wild bass.

From the initial MLS of 26 cm in 1974 to the current 42 cm introduced in 2015, four entire decades have elapsed. If 42cm is currently regarded as scientifically correct, why wasn’t it 42 cm in 1974?  To be clear, bass biology has not altered – it is the same species, same growth rates, same size at maturity. This asks the question, on what scientific basis was the MLS set at 26cm, or 32cm or 36cm? The only consideration had nothing to do with science but everything to do with providing commercial fishermen with the easiest short term earning opportunities. The interests of recreational anglers and the thousands of livelihoods they support were completely disregarded.

Recreational anglers have been battling for all those 40+ years to have the MLS increased and occasionally have had reason to feel optimistic. In 1990, the Government initially announced it intended to raise the MLS from 32cm to 38cm but commercial representatives objected so vehemently with grossly exaggerated claims of predicted lost incomes that the Government shifted the increase downwards to 36cm.

In 2005, the recreational sea angling community led by BASS with encouragement provided by the publication of an economic evaluation of recreational sea angling and a Cabinet Office Strategy Unit report of the entire marine fisheries sector, both of which positively highlighted the economic value and potential for development of recreational sea angling, lobbied for the MLS to be raised to 45cm as just one measure in a comprehensive Bass Management Plan. The then fisheries minister, Ben Bradshaw was persuaded to increase the MLS from 36cm to 40 cm with provision for a review after two years to consider raising it to 45 cm.

Things got ugly. The weekly commercial fishing newspaper, Fishing News, was dominated with letters and editorial comments lambasting anglers and Ben Bradshaw’s decision. The MLS issue for bass appeared on the agendas on most Sea Fisheries Committees where the debate was appallingly ill-informed. CEFAS were commissioned to produce a number of reports including a regulatory impact assessment.  The level of misinformation and downright lies promulgated by those who opposed the increase was shocking but confirmed fisheries management is based on politics rather than on sound evidence.

Perhaps one of the best examples that illustrate how some individuals were prepared to peddle misinformation was displayed in a report in Fishing News of events at a statutory meeting of Cornwall Sea Fisheries Committee. The report quoted long term highly respected fishermen members saying a 45 cm bass weighs almost four pounds (it actually weighs 1.75 lbs) and another fisherman member stated: “hardly any bass as large as 45cm are caught nowadays.”  On the same page, literally on the same page, was a report of a tonne of bass landed into Newlyn by a local gillnetter where half the fish were stated as being over 45cm!

Then some seriously bad news hit the media. Ben Bradshaw was being moved to the Dept. of Health and the replacement minister was to be Jonathan Shaw. Mr Shaw inherited an explosive situation and he was immediately targeted by the NFFO and Cornwall Fish Producers Organisation together with a John Butterwith who headed up the North Devon Fishermen’s Association.  A trawl fishery for bass was being developed in the Bristol Channel operating out of Appledore in North Devon and as they were mainly catching immature bass, they knew a 40 cm MLS would spell an end to this fishery. They lobbied the new Minister and he was persuaded to rescind Bradshaw’s plans. The Minister arranged a contrived meeting of commercial reps and RSA reps and arranged for a CEFAS scientist, a Mike Smith, to be on hand to give the appropriate evidence. Mike Smith was asked for the latest science on bass stocks to which he sheepishly replied, “The Spawning Stock Biomass is the highest it has ever been.”

It was game over. The planned increase in MLS to 40 cm was ditched and a letter the Minister sent to Martin Salter revealed his concerns centred on the short term loss of income the commercials would incur had the MLS been raised to 40 cm. So much for decision making based on the evidence!  Once again, short term losses for a few, trumped long term sustainability and a more certain future for all those reliant on bass.

We subsequently learnt that the trawl fishery in the Bristol Channel had applied for Marine Stewardship Accreditation and monitoring of the fishery revealed discards were as high as 90% due to bass being caught less than 36 cm.  The trawl fishery was effectively taking place targeting immature aggregated bass!  Fortunately, the accreditation was not given. The whole tragic affair was yet further proof that Defra behave as advocates for commercial fishing with any concerns for the fishery resources, the environment or recreational anglers well down the list of priorities.

So what are the outcomes of maintaining the MLS at such a low level?

Two years after the MLS was increased from 32cm to 36 cm, CEFAS were tasked to do an analysis to assess the results and found the increase had produced a 40% increase in yield! Think about that. The increased MLS that had attracted such condemnation from so many commercial fishermen and commercial fishing organisations had delivered a 40% increase in yield for the very sector that had so bitterly opposed it!

The 40% increased yield should not have surprised anyone since a number of published scientific studies point to the maximum yield for bass being achieved if fishing mortality was delayed until 48/50 cm. Fishing effort would need adjusting towards larger fish but given the catching sector has already adapted with a number of increases in the MLS, there is no reason to suppose it wouldn’t have done so again had Ben Bradshaw’s plans come to fruition.

Harvesting older and therefore larger individuals of any species can result in a number of positive outcomes. Larger individuals weigh more, so are generally worth more money, and for many species, not only the increased mass per recruit results in higher revenue, but the price per kilo also increases with size and bass is one such species. Over 97% of all bass consumed in the UK are imported farmed bass and invariably these are small portion sized fish. These have depressed the price for small wild fish and the larger wild bass are, the more they are worth per kilo. The compound effect of mass and increasing price per kilo really does add substantially to the value of each fish.

A further advantage of harvesting older fish is that the Spawning Stock Biomass is more resilient to occasional poor year classes. In the case of the gill net fishery for hake, harvesting larger individuals with larger meshes has been successful. See: https://cornish-hake-stories.msc.org/

In 2000, landings of mainly gill net caught bass from the south coasts of Devon and Cornwall were sampled and CEFAS provided a graph showing the length distribution of catches. 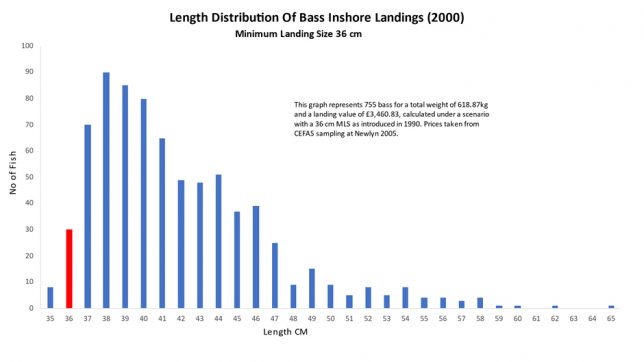 Using this data from 2000 when the MLS was 36cm, as a basis to calculate how such a profile of bass generates different values under four different MLS scenarios by simply sliding the horizontal axis left or right so as to retain the same profile. So, for example, if the horizontal axis is shifted to the left so that the 42 cm column moves to where the 36 cm column is now, the 48 cm column would be where the 42 cm is now. 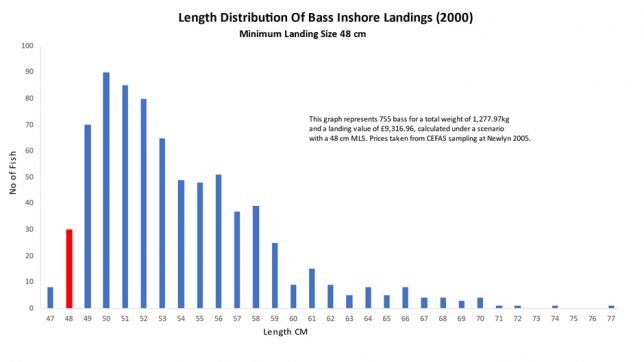 For consistent comparison, prices per kilo and mass per fish at a given length as published by CEFAS in 2005 for a regulatory impact assessment have been used.

These figures essentially illustrate the difference between harvesting carrots as boot laces or potatoes as tiny marbles, rather than waiting and harvesting them when they produce far greater yields.

The same 754 bass harvested under a 42 cm MLS regime rather than under a 36cm MLS regime produce a 68.6% increase in landings value or fishermen could alternatively catch 41% less fish and earn the same revenue. 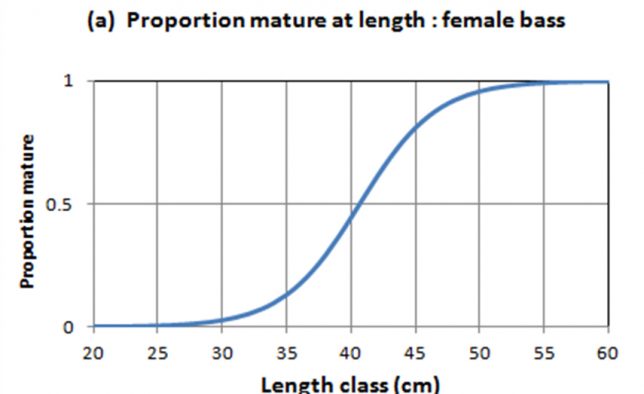 One conclusion is that decades of managing bass stocks with such miniscule MLSs have actually denied commercial fishers many £millions of income. How perverse it is to know that this loss of income is the result of their own vehement opposition to larger MLSs. The cumulative losses to UK plc of economic impacts associated with recreational bass angling over decades of flawed management will have been hundreds of £millions.

A root and branch change to the culture that pervades the entire fisheries management regime is urgently required.  The current Government’s stated desire for World Class Fisheries Management is encouraging but will politicians have the courage to choose long term outcomes for the nation’s public marine fishery resources over short term earning opportunities for the few?