I’ve talked with many anglers who have ﬁshed the Dark Strand, in Smerwick Harbour on the Dingle Peninsula. In daylight it is regarded as one of the most productive venues, although weed can be a problem. It needs a good surf to ﬁsh well, but at night it becomes a different place — a good surf is not necessary, and the bass come in close where they can give excellent sport. However, it has a reputation for being a spooky place. The night can be ﬁlled with strange sounds, and it’s deﬁnitely a place to ﬁsh in company, and with your headlight turned on. I’ve never believed in the paranormal, but I do feel uneasy ﬁshing there alone at night!

Once in mid-December I arrived there at 15.00, just after low water. Conditions were very good, although I sensed that the surf was building up. There was no weed and my hopes were high. There was no wind at all and everything was calm and still. Bites were slow in coming and after ninety minutes all I had was a large ﬂounder.

As dusk fell and the lights of Ballydavid came on, I noticed what seemed to be an old lady and a child on the rocks to the west of the strand, maybe sixty yards away. I gave them a wave but they did not respond. Anyway, I carried on ﬁshing and around 18.00 I caught a small bass, which I returned. It was now very dark and I started to feel uneasy. 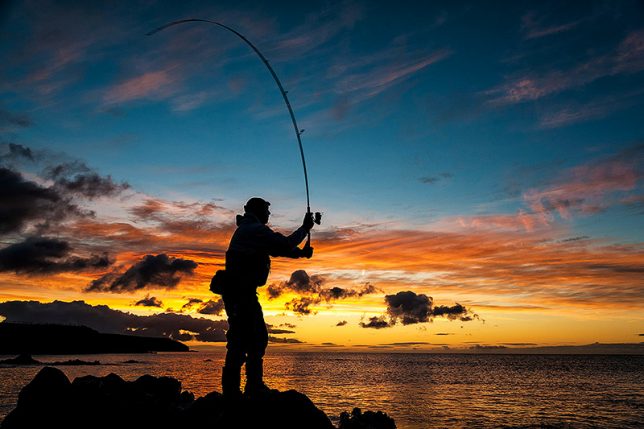 I was using a rod rest to hold the bait bucket and spare tackle. As I rebaited and walked forward to cast, it was obvious that the surf was really building up now, with tables moving well up the strand. This wasn’t a problem because I had about sixty yards of beach behind me to the steep rise to the high tide line.

Ten minutes later I had another, larger bass but dropped it in the shallows. I rebaited, moving the rod rest up a further ﬁfteen yards, and then walked down to cast again. Even though I was in chest waders I decided to stand at the edge of the water. I ﬁshed on for twenty minutes and then missed a bite – so I reeled in again to put on some fresh lug and cast out. I walked back towards the rod rest, and after a minute of searching it was deﬁnitely not where I had left it! I noticed a line in the sand leading up towards the top, and assumed some joker had moved it. I shone my headlight up to the dunes and there it was. I got up there and all was well – the rod rest was on the shingle with the bait bucket and tackle nearby.

I then realized there were no footprints leading from where I had left it, to where it was now! I felt very uneasy, and suddenly quite cold. This seemed to be a good reason to pack up and go, but I could not understand what was going on. Anyway, as I was packing up I heard a very different sound from the surf. I shone my headlight towards the sea just in time to see a massive set of rollers coming in. These were freak waves, maybe ﬁfteen feet high. Instinctively I grabbed the rod rest and gear and moved further back into the dunes. Just then the rollers came right up into the dunes, and I struggled to stand as they washed around me. I think there were ﬁve of these monsters, and within about a minute they had completely receded, leaving around ﬁfty yards of bare sand again.

I was quite shaken, and climbed as fast as I could further up the dunes to the car. I looked back and the surf was still big, but there was no sign of any more freak waves. If I had been standing where I had left the rod rest, I would certainly have been swept along at least ﬁfty yards. It would have been impossible to stand up, and with various patches of rock nearby I could have been injured. 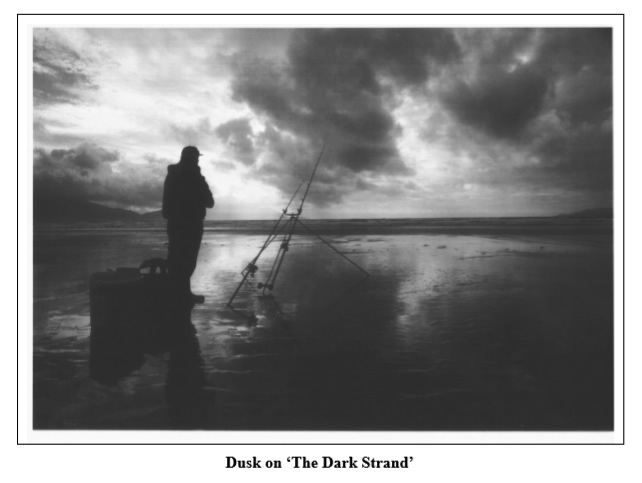 A day later I was talking to an old farmer whilst ﬁshing at Beal Bawn. He asked if I had been on the Dark Strand on the night of the big waves, and when I conﬁrmed I had been, he asked if I had seen anyone there. I told him about the old lady and the child I had seen on the rocks, and the strange experience with the rod rest. He said that it would have been the child who had moved my gear up the strand. I asked where the child lived, and he explained that both of them were from Gort Na Dubh, a village about a mile to the west. I said I would call in and thank them for, in effect, saving me from the big waves.

This, he said, would not be possible, and he told me the following story . . .

In 1902 a young child and his grandmother were on the rocks at the Dark Strand on a ﬁne December day. The child was swept away by a series of large waves that came without warning. Despite of an extensive search over the next few days the body was never found. His grandmother was overwhelmed by grief, and on Christmas Eve she walked out of her home and was last seen on the path that leads to the high cliffs of Sybil Head, and was never seen again. In the 1930s a ﬁsherman from Baile Na nGall was leaving the harbour at dawn to set some sole nets. He noticed a woman and child on the end of the pier; and for some reason he couldn’t explain, he turned the boat round and went to the pier and tied up. He climbed up the pier steps and when he got to the top they had vanished. He looked back towards the village and heard the sound of heavy seas breaking on the rocks at the edge of the bay. He estimated about six or seven, about 12 foot high and within no time they swept over the end of the pier. His boat was destroyed, along with two others moored in the bay. Luckily he had started running along the pier when the waves broke and was unharmed.

The farmer said that there have been no other sightings of the woman or the child as far as he was aware. I asked what he made of my experience and that of the ﬁsherman. He was non-committal, but said it would be a foolish man who thought he could explain everything in this world.

Since moving to Kerry I have discussed my experience and the story of the ﬁsherman with many local people. They have never expressed any surprise. There is a different attitude here to the ‘hidden world’, and it seems to be accepted that the dead can make contact in different ways.

I’ve not been back to the Dark Strand alone at night, and even during the day I still get a strange feeling someone is watching from the dunes.