The Early Bird Catches The Worm

The Early Bird Catches The Worm

September is my favourite month. This is when I put in the most fishing hours, in search of those hungry bass that are feeding heavily before the onset of winter.

Over the years I have tried all styles of fishing, from beachcasting on flat sandy beaches to rock fishing off 60ft cliffs, but the style that has brought me the most pleasure is plugging and spinning.

I am lucky enough to live a couple of minutes away from the sea, and have an unlimited choice of places to choose from. Anyway that’s enough of me rambling on, let’s get on to the serious stuff. 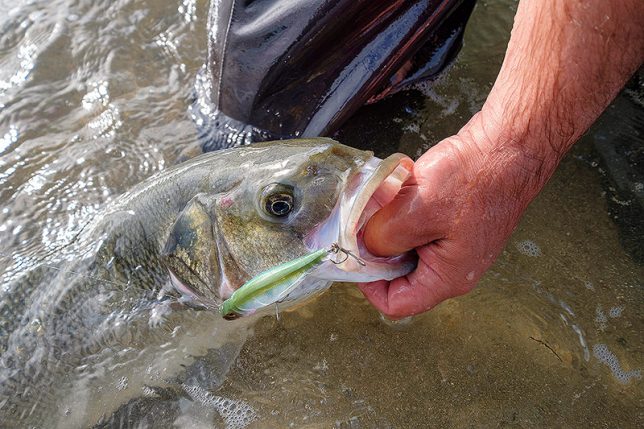 The lures I use are mostly Rapalas, with the odd Toby or Dexter wedge. For attaching the lures I use a small snap link with swivel. With the lures & swivels in a small box, I just take my rod, reel, sunglasses, hat and a waistcoat to carry it all in, and I’m off in search of bass. Oh, I forgot … pair of good quality hiking boots too. I don’t bother with chest waders unless I intend to get into the surf.

This particular September was one of those Indian summers we have come to enjoy over the last few years. The tides were just starting to make and settle out at 6.5 meters for the next week. A good time, according to my records, to be in with a chance of a bass or two. I decided to fish an evening with high tide an hour before darkness. Armed with all my gear and a small torch, I parked the car but to my horror there were several other cars parked up. I hoped it was just some late holiday makers out for an evening’s walk along the cliffs and beaches. With the car locked up I headed off along the coastal path. With a fifteen-minute walk ahead of me I took it slowly so as not to get in too much of a sweat. As I walked along, being ambushed by the hordes of gnats & midges that were waiting in the fern – strewn hedges, pictures of the spot I was to fish were being relayed around in my mind; what lure I would use?, where I would start casting?, and so on.

I was over the first little hill and was getting close to my spot. I could now see the water to my left and hear the gulls screeching. A few more yards and I would be at the top of the cliff. As I got there, more than a little hot & sweaty from the brisk walk and gnat attacks, my early thoughts back in the car park became reality. There, below me, spaced all over the rocks were a dozen or so anglers thrashing beachcasters and hauling up strings of mackerel. As I stood there looking down at them, more in shock than exhaustion, one of them looked up at me and taunted. “Oi Mate, your too late, there’s no room left”. He continued, “It’s the early bird who catches the worm.” He then turned back and carried on fishing laughing with his mate as he did so. The little «+++» I thought, all that planning, not forgetting the bloody walk, to find the whole area covered in a crowd of mackerel bashers, who probably take far more than they actually need. I was gutted!

What to do next, turn round and go home in a sulk, or keep on walking in the hope of finding a spot to fish? I stood there for a while with my back to them, and pondered over what to do. I could not let them watch me head back home, so I caught my breath and headed onwards for somewhere to get down and fish. I knew that for the next mile there was no way down the rugged cliffs, so I soldiered on, occasionally leaving the path and carefully peering down to see if I could find a way down. I knew that soon there would be a little beach.

Just before I reached it I came across a slot in the cliff that had been fenced off to stop anyone falling down. It came a fair way back, and on the other side of the fence the cliff dropped away slowly. From the fence I could just make the waters edge out and part of the beach. “Let’s see if I can get down here”, I thought out loud. Over the fence I climbed. I slowly crept down the grassy bank until I was level with the crack in the cliffs. I inched my way down using the rod as a support. I could hear the water rushing into the crack and echoing up the cliff; I got to the bottom of the grassy bank & there, down below me, was a superb little plateau of rock. A small climb down of about 12 ft saw me on it. At last, a spot to fish from — and a new one as well! I tackled up well away from the waters edge, clipping on a trusty Rapala Silver, and then descended the last few yards like a panther stalking its prey. I tucked myself into a small gully just back from the edge and flicked out the plug.

What a spot I had found, to my left was a small cove with lots of small boulders and rocks, backed by steep cliffs. To my right were two partly submerged rocks and a larger one that was well out of the water, and I knew that just around the corner was the beach, a well known bass beach. I gently wound the plug in and recast, going through a complete fan casting routine for the water in front of me. Nothing, not even a follow.

As I cast to my right again I wound in a little faster and held the rod a little lower, so as to make the lure dive a little deeper. Half way through the retrieve the rod tip pulled over and tugged a few times; my heart rate increased instantly. “A bass” I thought as I wound down into the strike. Nothing, the lure just kept coming. I cast again and the same thing happened. What was there? They certainly felt like ‘takes’ but I was not sure — was it rocks I was hitting into?

High tide had come and gone and the light was fading slightly. However, it had been a scorcher of a day and there were hardly any clouds in the sky, which would give me some extra time before it became completely dark.

I had changed lures a few times but was now back with my old favourite Rapala Sliver (black & silver). The light was now fading fast and so my chances of catching a bass seemed unlikely, and my thoughts were now on the walk back. My enthusiasm was now also ebbing away. “Four more casts and I’m out of here” I said to myself. I cast away for the third time to my right and began to wind in, thinking back to those mackerel bashers that had given me a hard time and spoilt my chances of any fish. Then, having only taken up the slack line to the lure, my little carp rod suddenly arched over and the reel began to scream. I instantly snapped out of my apathy and lifted the rod, as the line left the spool at a rapid rate of knots. With about 20 yards removed the fish stopped, and there was a large splash as the fish seemed to swirl on the surface. I stared at the area I thought it was in, and through the evening light could just make out some ripples caused by the fish. I slowly pulled the rod across to apply some gentle side strain and began to wind in. A little more pressure and she slowly began to come towards me. From the noise and ripples she was still on the surface and felt like a decent specimen. A few more turns on the reel and a little more pressure … gently does it … I eased her closer and closer. Then just as I thought I had beaten her there was a loud splash and the reel was back into life again. She had dived! As she eased up I slowly applied pressure and gained a few turns back. Stalemate, the fish just seemed to hang there. I then held the spool and gave the rod a little more bow, and she suddenly began to move. I quickly wound in applying as much pressure as I dared. She was now back on the surface and slowly heading back towards me.

As I retrieved line I gazed into the sea below, searching for a sight of my fish. It felt like ages. Then, as my eyes got used to the light I could see her, “What a fish, what a beautiful fish!” I thought to myself. There below me with my Rapala hanging from its mouth was a cracking autumn bass. As she got closer I could see she was well beaten and had now turned on her side. I quickly leant down and gently but firmly lifted her from the water. “What a fish, what a fish!” I kept saying to myself as I removed the treble. As I laid her down on the rocks and put my kit away I kept flicking the torch back and forth just to check that she was still there and that it wasn’t all a dream.

I carried her up over the rocks and back up the grassy bank with a spring in my step and a grin from ear to ear. My thoughts once again drifted back to that cheeky mackerel basher who I had encountered earlier. “Early bird that catches the worm ….. My foot” I chuckled, “He who laughs last, laughs longest.”

Back at the car I lifted her onto the scales. 8lb 7oz, my best fish yet. With all that planning and such a bad start, things hadn’t turned out too bad after all. Bass fishing at its best. If only the mackerel bashers had been at the car park on my return! Maybe it was for the best, for only I know the mark that this beautiful fish came from.