The Effects Of Stress On Bass And How To Reduce It

With the practice of catch and release becoming ever popular, there has been much discussion already on reducing unnecessary harm to our catch, such as de-barbing hooks, replacing trebles for singles and various debates on the appropriate way to handle bass when unhooking.

However, I have yet to come across any meaningful discussion about what a bass’s body actually undergoes during a fight with an angler and how this impacts the fish’s mortality rate when released. 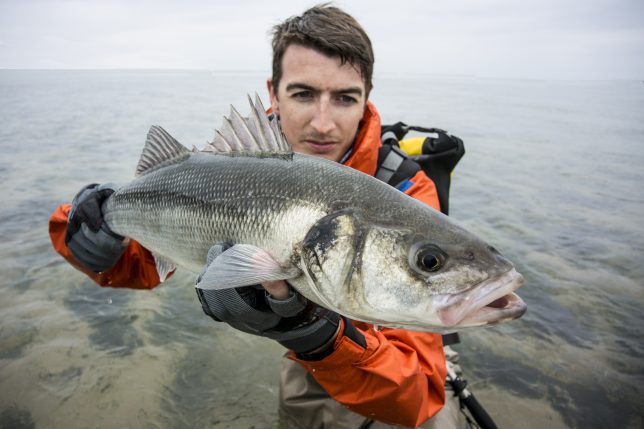 Unfortunately, there haven’t been any huge studies done on our native bass but there has been some extensive research carried out on the American striped bass (Assessing Impacts of Catch and Release Practices on Striped Bass, J. Tiedemann + Dr. A. Danylchuk) which, given their similarities, can be used to help us understand what our bass endure during an average scrap with an angler.

Despite a fish appearing healthy when it swims away, it does not always lead to a successful release. Muoneke and Childress, authors of Hooking Mortality: A Review for Recreational Fisheries reported fish that appear to be healthy when they are released may exhibit post release injuries or stress caused by angling and handling and actually experience mortality some time after release.

To help overcome and prevent this it is therefore important to understand the underlying cause of this stress. Once entering into a fight with an angler, a bass’s muscles will begin to release lactic acid – much like a human. Now we all know that when too much lactic acid builds up, we get cramps … this pain usually passes as the lactic acid levels are dispersed at a fast rate – however fish aren’t so lucky.

This build up in fish can cause Acidosis, a condition which can lead to physiological imbalance, muscle failure and death. (Larger bass are more susceptible to this.) This condition is more prevalent in warmer water and those with low oxygen levels – such as still estuaries. A bass will find it much easier to neutralise the PH levels in its blood after a build of lactic acid if it has well oxygenated, cool water to revive in.

How to limit the risk of lactic acid build ups?

The task starts before you even hook into a fish – the key is to look at the tackle you are using before heading out on a bass hunt. Prolonged fights are the primary cause of this potentially lethal build up of toxins, so it stands to reason that by reducing the fight time, you minimize the risk. 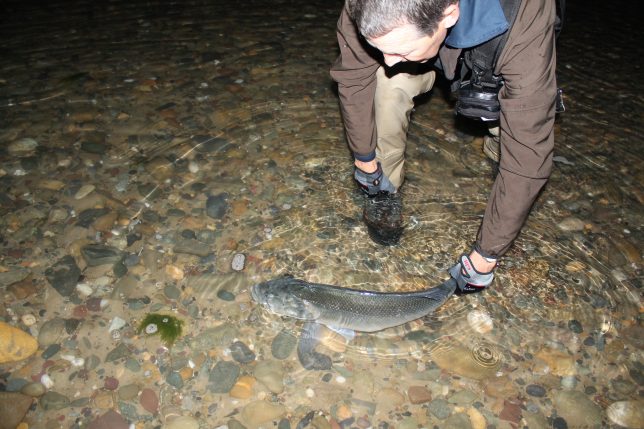 Well balanced tackle will ensure that from the off, the fish won’t tire itself to the point of no return. For example, I am a lure angler and my conventional bass set up comprises of an 8’6″, medium action rod, a 3000 sized fix spool reel, loaded with 20lb braid and a 20lb fluorocarbon leader. This is perhaps the ‘conventional’ lure set up which most anglers use for targeting bass and it is more than ample for taming even specimen fish in our waters. However, I have seen some anglers scale down and whilst I can see the ‘sport’ aspect of their approach on such light gear, I think it is irresponsible to target a fish which could weigh 2lb but could also grow in excess of 12lb . . . hook into a larger specimen and you will be there all day long as it tires and edges ever closer to that nasty limit of not being fit to be released.

Many may not agree with my approach of fighting a bass hard from the start – landing them ‘green’ as some people would say. I set a tight drag to prevent huge reel screaming runs which benefits no one but the anglers ear. I would much rather land a fish which is still lively and will release with no issues than prolong the fight and risk the life of the bass. I have witnessed too many fresh water anglers saying ‘the fish isn’t ready’ and waiting until it has rolled over onto its side, presenting itself to the net before it is landed – by this stage the fish is well and truly burnt out due to over stressed muscles and fatigue.

When it comes to the release, be sure to keep the fish properly submerged in the water and preferably into water which is either flowing or moving as this will help push oxygenated water over the gills. If there is a prominent direction of flow, then point the head into it to make life easier for the fish. The same thing applies on the open coast – if there is life and turbulence in the water, try to release the fish, if safe to do so, in areas of well oxygenated water.

Give it some thought:

This concept may not be new to you but it is always worth exploring all the eventualities and possibilities, especially when we go to such great lengths to ensure the survival of our beloved species.

With some careful forward thinking and planning, I think we can all tweak our approach a little to take into consideration the impact our sport has on the anatomy of a bass. Certainly, by factoring this into our fishing, we are adding another layer of effort into our conservation based attitude towards a fish which needs as much help as it can get.

First published in Sea Angler in 2016