The Lure Of Big Bass (Part 2) by Donovan Kelley

I have for many years kept a record of all reported bass of 10lb and over. It started just after the war, at a time when published information on bass was scanty. I covered vears back to 1903. Lest however that be thought to be a clue to very advanced age I must add that the Fishing Gazettes for the early years were purchased from an elderly acquaintance. The Fishing Gazette was the main, indeed virtually the only source of information on big ﬁsh. Even there it was very scanty, and for 50 years only a handful was reported each year. In 1953 the Angling Times came on the scene, with its stimulus of prizes for big ﬁsh: the yearly average jumped to 30. In 1966 another weekly paper appeared, Anglers Mail, and the ﬁgure rose to about 100. It has remained broadly at that level ever since, except in rare periods of unusual abundance. In the peak years of the 1959 class the total exceeded 150 for 6 years, reaching 183 in 1979. There was a less dramatic rise, more recently, for the 1969 class – some of which grew unusually fast. 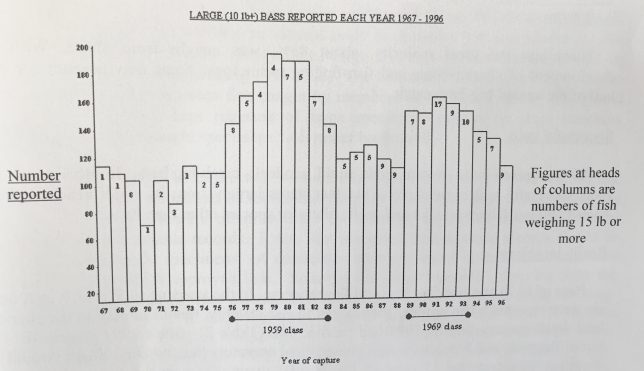 The ﬁgures do not give the complete picture: many large bass do not get reported. There is quite strong evidence to show that the total reported each year is about one-third of the true total. It appears to be consistent at that level, so the shortfall does not vitiate comparisons between years.

I am now discontinuing the big bass records. This has provided an opportunity to analyse their main features, in the following paragraphs. Detailed facts and ﬁgures are given in Table l and Table 2.

Big bass have been caught throughout the British range of the species: that is, very broadly, south of a line from The Wash to Solway Firth. At one time the most productive area was the south side of the south-western peninsula – South Devon and South Cornwall. Latterly these have declined and most big bass now come from the south-east – Sussex, Kent and Essex. In the ‘70s and ‘80s Bradwell in Essex contributed substantially to the SE ﬁgures but has fallen of late.

Most are caught in late summer and autumn.

Years ago the great majority, about 85%, was caught from shore. With the development of charter-boats and ﬁsh-ﬁnding technology, boats now account for one-half of the annual big-bass catch.

All recognised baits – worm, crab, squid, sandeel – catch big bass. In literal terms the most successful bait is mackerel – but that stems largely from its widespread use from boats fishing offshore wrecks and reefs, often for species other than bass.

Bass of 15lb and over are few and far between. In the years up to World War II only six were reported. The number then began to rise steadily, thanks largely to the charter-boat developments, and by 1996 had reached 196 (Table 2). Since 1991 anglers ﬁshing out of Brighton and Newhaven with charter-boat operators like, notably, Stuart Arnold of Brighton have recorded 12 over 15lbs, besides many others in the 10 to 15lb range. Before that, off Bradwell, operators like Bob Cox and John Rawle had successfully explored the offshore banks of the outer Thames estuary: between 1976 and 1985 no fewer than 23 over 15lb were recorded there. Most were survivors of the abundant 1959 class, then near the end of its natural life span. When they dropped out there was little to replace them: in the next ten years the number from that area fell to 9. These were mostly fast-growing members of the 1969 class and included one of 15lb 14oz, caught by Graham Pickett of the MAFF‘s Lowestoft laboratory, which was only 14 years old.

It was hoped that the 1969 class, with its fast-growing ﬁsh, would produce the first rod-caught bass over 20 lbs. In fact it did, but Paul McEwan’s record boat specimen of 19lbs 9.25oz was allowed to remain drying out in the boat for several hours before weighing.

There have however been several reliably reported commercial captures over 20 lb, the best off Looe in 1990: it was weighed by the MAFF Fisheries Ofﬁcer at just over
25lb.

Most very large bass are caught late in the year, between August and November, usually on the south-east coast, and usually on mackerel bait. 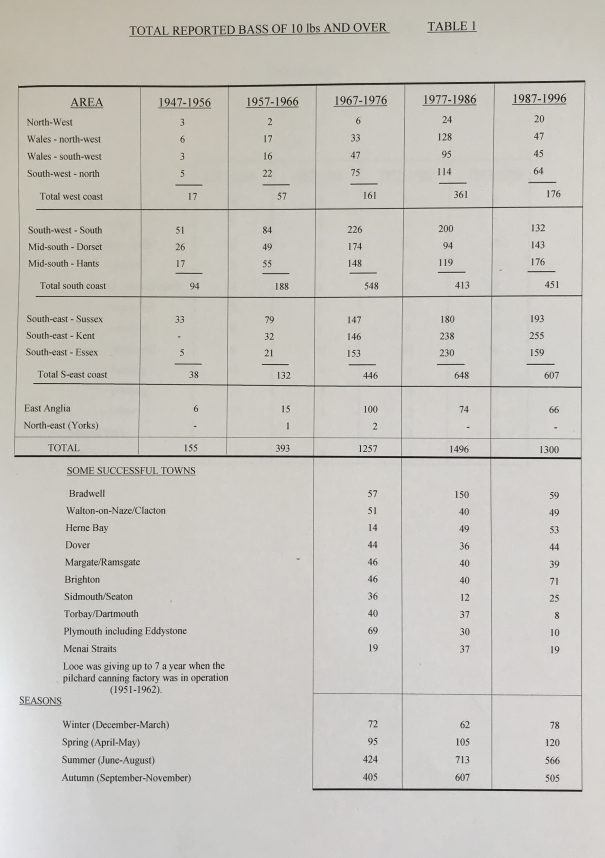 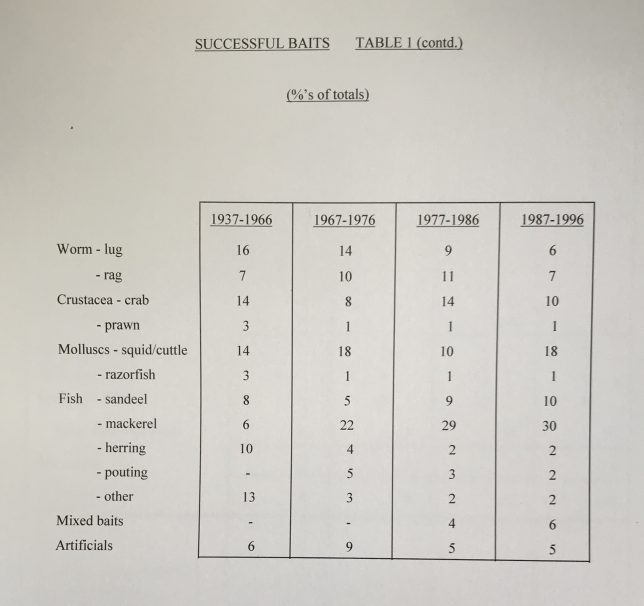 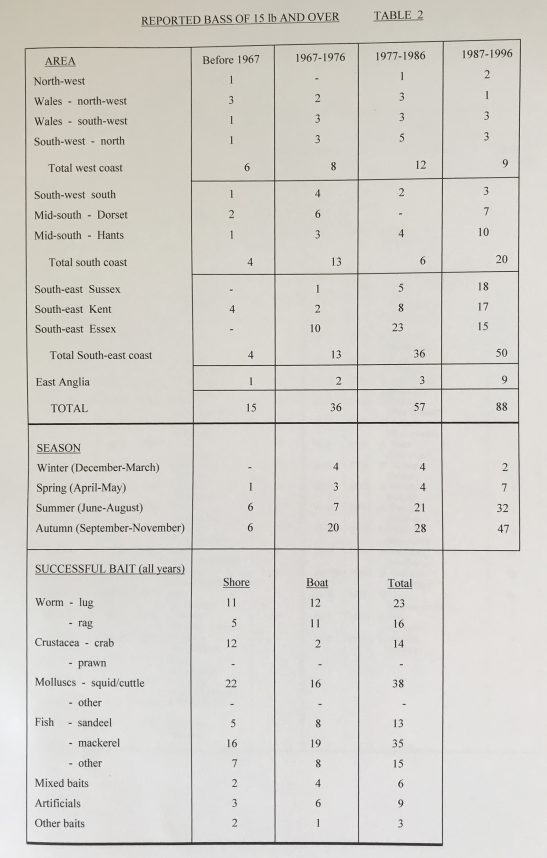