The sea temperature is one of the most critical factors, alongside the lengthening and shortening of the days that contributes to the migration of many species of fish, and of course their prey. And whilst the latter is set in stone, the former can fluctuate markedly depending on the air temperature and prevailing wind direction. For example, in warmer winters the overall water temperature around our shores will remain higher than average. But conversely, if we have extended cold spells or winds outside of the usual south-westerly direction then it can delay nature in general – something that most definitely occurred this year of course. 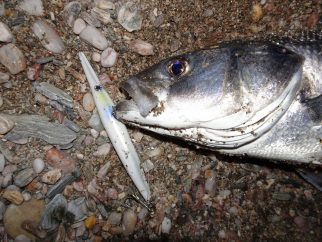 That the bass fishing season started excruciatingly slowly is undeniable, but when it did ‘switch on’ for me (during the first few days of May) I was left wondering whether it was because the sea temperature had reached a certain figure? Because what the bass were actually feeding on (sandeels, cuttlefish, sprat) had migrated closer inshore? Or it might have been because of a combination of both perhaps? But could something else also be responsible?

In the same way that a constant water temperature is required for the eggs to form in the Female fish, spawning bass returning to a predetermined stretch of coastline (something that has been proven to occur) could necessitate a certain sea temperature. Indeed, 10oC is often muted as the ‘trigger’ for the bass numbers to increase inshore and my own diary entries confirm a distinct correlation between the two.

For example, last year, in mid March to be precise, the sea temperature reached the magic 10oC here in south Devon, and within days a client of mine caught a 3lb+ bass. Yet this season, it didn’t consistently reach this figure until late April – and sure enough, within a week I’d landed my first proper bass (above 4lb and therefore a fish that had reached maturity) on a lure, at night, on a needlefish – something that could offer a clue as to what they were feeding on.

Crabs and gobies in particular are available all year round among the intertidal zones, but according to my diver friends there was an influx of cuttlefish around here in early April, with the sandeels, fry (immature mullet and bass) not too far behind. Yet puzzlingly, the bass were most certainly not rampant inshore judging by the lack of catches I, and many others were experiencing – but the food was definitely there! 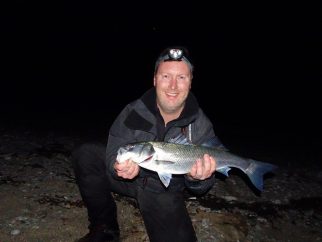 So this led me down yet another avenue in regards to my thought process… Could their metabolism, and the rate of it, be responsible for the very sudden increase in my catches when it did warm up significantly.  Maybe they were inshore all along, but just not feeding with vigour, because they didn’t need to in the apparent ‘much colder than average’ sea temperature present at the time?

Within the space of a few days/nights lure fishing I’d landed a number of bass up to 5lb (mostly in darkness) following a marked increase in the air and sea temperature. Moreover, I can recall the contrast of being stood on a beach at dawn on the 29th April wearing two jackets, a woolly hat and gloves whilst fishing and feeling colder than I had all winter – casting into what appeared to be completely fishless reef. Yet within a matter of hours I was stood there on a glorious evening as that switch was well and truly flicked – could the trigger for this behaviour have been down to a requirement to feed fervently? Of course, there is no way to prove this theory, but in my experience, rapid changes in factors such as light levels, sea state and many other elements associated to catching these magnificent creatures can make a difference – something certainly did!

For information on Marc Cowling’s guided bass fishing operation his website/blog can be found at www.southdevonbassguide.com