Memorable fishing trips aren’t just the ones that end with the obvious trophy shot. Six years back, when in Cornwall on holiday I had my fishing friend Chris staying. A national paper needed a picture of him with a bass for a weekend supplement article about a soon to be published book. When we are down there together it doesn’t take much of an excuse to go fishing – and this one was gilt edged! So when my wife, children and their various friends staying with us went inland to a local farm to watch cows getting milked and eat ice-cream, I played my joker: “Sorry Helen, but the Telegraph has to have this picture in a day or two.” I got as resigned smile and we dashed off to the harbour.

The light was flat and a chilly northerly blew offshore. And although the sea was flat, even as we set off the whole seascape somehow felt aloof and uninviting. We fished all our favourite reef and shore marks and several I’d never taken him too before. I cast surface lures, shallow divers and even unweighted soft plastics while Chris stuck to his trusted (Yo-Zuri mag slider) surface lure. Come dusk however, neither of us had raised the slightest of interest from even a pollock and it seemed as if the apocalyptic predictions of barren oceans of the future had already come true…Even the gannets and turns were absent, while the gulls stood motionless and disinterested on the rocks (which is never a good sign).

Occasionally in fishing you are smart enough to know when you are wasting your time. Unfortunately for me though, I frequently fail to acknowledge what is obvious. So on the way back to port, in fading light, I stopped one more time in an area where a fantastic rip develops over a shallow ridge between protruding rock pinnacles, for yet another “final” try.

“Why the hell haven’t you taken me here before Matt, it looks fantastic.”

“Because it might look great but I’ve never seen let alone caught a bass here” I replied. Yet I had to concede it certainly looked worth a cast.

I set the little Zodiac inflatable on a drift that took us rocking along in the current as we passed over barely submerged boulders and undulating kelp strands before it ended in a precipitous drop off. We fished whilst pondering the great mystery of why some places look right for bass but are not. Nearing the final part of the run the boat spun around in the flow and I was pointing away from where I wanted to cast upstream. Not a problem, years of fishing in the boat has led to me evolving a variety of weird, unorthodox casts to cope with situations such as this.

I flicked a backhand wristy cast behind Chris. As I launched the lure my partner in the boat lent back to adjust his seating position. My casting hand glanced his shoulder, the bail-arm snapped shut and somehow I managed to let go of the rod. Weighted by the reel the rod cocked itself upright like just cast float. Just out of reach, I paddled the boat ready to grab it, but 12 inches of carbon quickly became 6 then 3 then nothing as it disappeared under the slate-black surface. I peered into the water in disbelief, deludedly convinced it would bob back up any second. It never did.

The rod was relatively inexpensive (certainly by the standards of the post bass boom period) and was no huge loss, yet my reel was a good and new one. An additional problem was that I had no spare rod with me in Cornwall.

Chris’s plan seemed a hell of a long shot, but I had no other options so it was worth a go before the strong current as seemed likely, swept it way out to sea. First cast Chris hooked the kelp; the weight of the boat in the flow arched his rod around as he pulled for a break. The break that came was not the one we expected; 14 pound Fireline proved stronger than the 1960 Hardy cane salmon spinning rod and with a load crack it failed just above the top ferrule.

After the predictable initial expletives, few words were exchanged on the way back home. Those that were centred on what we might have collectively done to so offend the “fishing gods”.

Next afternoon, with our wounds now well licked, we were back at low water with my son Jacob and his mate Jack in the boat. The place looked different with the tide out and I was not initially sure we were even searching behind the right set of rocks, yet Chris and I both recognised a feature which convinced us we were in the right spot. The boys dived in, equipped with snorkels and enthused with offer of £20 pounds each if they salvaged the rod. The chances seemed slim but it was worth a try and would at least be an adventure for them. With no rip at the turn of the tide they were safe enough and with shallow still water they might have some chance of spotting something as the weed floated upright before it was pushed flat by the flooding tide.

After 15 minutes after they had zigzagged down the search area Jack who lacked a wetsuit was cold and losing heart in the search – something I had done at least 5 minutes ago. We pulled Jack in and he sat shivering draped in a towel. The wetsuited Jacob continued to hunt the zone like a spaniel working the undergrowth. Chris and I were about to call the search off when Jacob’s dived. On surfacing he shouted he thought he’d glimpsed something, then ducked down under again and again.

I edged the boat nearer and he breathlessly said he was sure he’d glimpsed the red face of a lure but the kelp was beginning to lie flat and he couldn’t see it again. He crisscrossed the now small search zone for another few minutes then dived again. He was down for what seemed an age. Then in an Excalibur like moment, first a rod, then an arm and finally his beaming face theatrically rose from the water. My camera was handy and I grabbed a very different, but most memorable angling trophy shot.

We dropped Jack and Jacob back on land and they ran back home to warm up while undoubtedly planning what to blow their bounty money on. The rod was undamaged, the reel turned as smoothly as ever and Jacob even had retrieved lure after he had to cut the braid in the rescue. Only Chris had lost out through breaking his rod – even if he did claim it was one picked up for next to nothing by a friend of ours at a recent auction. Chris had a spare (carbon) rod with him as well as his other tackle and as we were already afloat it seemed logical try again for a bass and the required picture.

As we headed for an offshore mark, we once again passed the tackle eating, bass devoid reef. Chris suggested a few casts. What the heck; the place owes us I reasoned. It took just 3 casts for Chris to land a plump 2.5 pounder – which is both the first and the last bass I have seen caught there. This final event felt like it negated the day before and returned the world back into kilter. 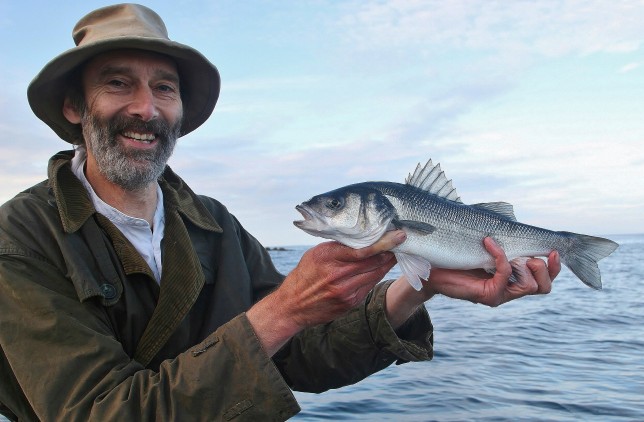 It’s strange how we as anglers can sometime anthropomorphise the ocean – something that is in truth not a distinct entity, but an immense caldron of chemicals containing a diversity of life, influence by the effects of numerous physical systems. Yet despite such logic, the water did somehow now feel welcoming and inviting to me, whereas less than 24 hours ago it had seemed to possess a degree of menace .

We returned at dark, with the trophy shot for the paper, memories of a fair few bass and distinctly brighter outlooks on life. Yet when Chris and I reminisce about this particular visit to Cornwall, it’s not the specific catch statistics that feature but the contrasting emotions between those successive afternoons and the “miracle” of salvaged rod.