The Wrong Tie by Donovan Kelley

No, not Trousers: the wrong Tie. This is not a Wallace and Grommit tale; and it certainly wasn’t a Grand Day Out – for me.

With Eric, best of angling friends and long-term research partner, I was taking a break from the bass tagging. We were fishing some Anglesey rocks where we knew we could count on sport with pollack. Not the 2-pound-and-under fish of South Devon and most of Cornwall: real pollack, with a chance always of a 4, 5 or 6-pounder. We never had anything else here; even wrasse seemed to dislike what looked to us a perfect habitat for them. 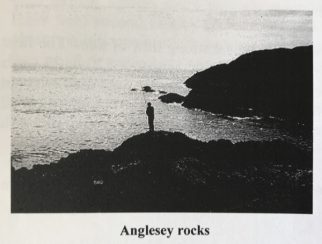 Conditions were perfect, and as we tackled up our confidence grew. Eric was soon in action. The float dived, his rod arched, and a fish was on: a good one but behaving rather strangely, in fact not at all like a pollack. It was soon ready for the net, and as I lifted it out I gasped to see it was a bass, and a very nice one, weighing 6¼ lbs on the Salter’s balance.

What was a bass of this size doing here? We had never seen anything like this before. Eric rebaited and cast out again. An hour passed, then again his float went down and he was into another good fish: and again a bass, this time 5¼ lbs. This was getting interesting – though I had not myself had a bite yet.

Eric resumed fishing – and soon was into a good one yet again – and again a bass, the best of the afternoon, 6¾ lbs. That was how it remained: three lovely bass to Eric, nothing at all, not even a bite, to me. Why? As we made our way back along the cliff path to the Landrover I pondered my total failure. There must be a reason when fish like that are present. We were using identical tackle, fished at identical depths. The problem defeated me.

It was a hot day and the walk round the cliffs soon had me perspiring. I reached up to loosen my tie … and stopped short. My tie! That was it. We had been expecting Pollack and I had not put on my ACA tie. For years, in fact ever since the formation of ACA, their tie had been my talisman when bass fishing – and it had rarely let me down.

Next day we were again out on the rocks – this time with the right tie. Would the bass be there again? Or would we be back to the more usual pollack. Eric was soon in action – and again it was bass. He again caught three very nice fish; but this time he did not have a monopoly. I caught one which pulled the balance down with a bang to its 8 lb limit. We weren’t able to get an accurate weighing and put it in the diary at 9 lbs. Later check against measurements suggested that it was about 10¼ lb. I also lost a smaller one when I slipped on the wet rock while netting. The tie had delivered.

Today I ring the changes; sometimes the ageing ACA tie, sometimes the Bass Society’s smart one. Superstition does not extend to saying which, in the diary: I cannot say I have noticed much difference.

A final word on judging weight from measurements. For years I only carried an 8 lb X 2 oz Salter’s spring balance, quite enough for most bass, and for any pollack or wrasse likely to be encountered in rock fishing. I always measure my bass accurately (fork length and maximum girth), and the sum of the two measurements is used to ascertain the approximate weight of any bass which cannot be given a proper weighing, i.e. the occasional fish over 8 lbs and all the tagged bass (numbering several thousand). Though not perfect the scale based on length + girth has been found to be surprisingly reliable, when tested. It is based on a plot on log-ruled graph paper of all bass for which over the years I have had accurate weights as well as measurements. It provides not only the mean weight (for bass of normal shape &c) but the lowest possible (for very thin spent fish) and the highest possible (for bass which are thick throughout their body length). For complete accuracy I think I would need two girths: one at the widest point (usually the “shoulder”) and one at the vent. A bit late in the day now for me to adopt that further refinement. For mathematical buffs other permutations are possible.

The scale is useful for checking the reliability of reported weights and measurements. It shows clearly that the true weight of the record boat bass would have been over 20 lbs: probably about 20½ lbs. What a pity it was not weighed sooner, before drying out. Now that virtually all the bass of that fast growing 1969 class are gone, the chances of a 20-pounder have become remote.

A similar scale for wrasse confirmed my fears that the weights of the 1912 Looe fish were overstated by 3 or 4 pounds each.

I regret not having compiled a similar scale for pollack. In Anglesey, at the little rock half a mile off the river-mouth the pollack averaged well over 3 pounds, and on one occasion Eric had one which, like that big bass, banged the balance down to its 8 lb limit. Comparing its photo with those of other pollack we caught it was clearly much bigger than the more usual 6 or 7 pounders: almost certainly a 10-pounder. A scale on the lines of the bass and wrasse scales would have confirmed it.