Things That Go Bump In The Night

Things That Go Bump In The Night

A light westerly wind was blowing across Dover Harbour. The moon brieﬂy appeared, then was gone again behind the clouds. The earlier rain had stopped but the ground was still wet. It was late October, though surprisingly mild. I drove past the Ferry port at the Eastern Docks, where I was working at the time, then out along the granite pier almost to the end. Leaving the car there, I decided to ﬁsh for the bass and took an eleven foot bass rod, drop-net and tackle box. 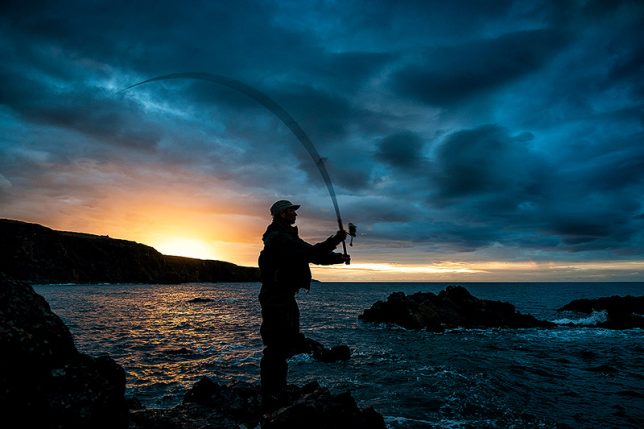 Under the pools of dim, yellow light cast by the pier lamps, I walked the last 50 yards to the end of the Eastern Arm, beside the small lighthouse. The tide was ﬂooding strongly. Small black-headed gulls and common terns were ﬂuttering and hovering in the breeze, then dipping onto the surface of the sea just where the pier head lights cast their glow, to inspect some tiny morsel. All the while they shrieked at each other and at their larger brethren.

The regular ferry sailings caused pandemonium amongst the sea birds, the powerful engines stirring the water into a foaming mass as the ship increased speed for the crossing to France or Belgium. In contrast, the arriving ferries glided silently past with hardly a ripple.

Just under the surface, on the edge of the semicircle of light, scad darted in and out of the shadows chasing shoals of brit that were being swept out of the shelter of the great granite structure by the tide. Pollack, coalﬁsh, whiting and mackerel stayed deeper but could be caught by slowly retrieving a ﬂoat-ﬁshed strip of squid or mackerel. The ever-present large bass rarely came out to the end of the pier, but kept their station against the wall on the seaward side.

I noticed how the tide always ran from north to south along the outside of the pier on both the ﬂood and the ebb. It eddied powerfully around the end of the pier in the eastern entrance to Dover Harbour. A quarter of a mile away to the southwest, the lighthouse on the nearest end of Dover Breakwater ﬂashed its warning.

The eastern arm was built similar to the famous Admiralty Pier, two miles away across Dover Harbour. Between the two, and also a good ﬁshing mark, is the Dover Breakwater which completes the protection for the harbor from strong winds and heavy seas.

The eastern arm had a high wall on the seaward side, and when I laid on the top of it I could just see the dark shapes of bass in the shadow of the pier. At this venue I either ﬂoat-ﬁsh with the bait suspended around ten feet down, or I cast a four ounce bomb about thirty yards then slide a six foot trace down via a clip, the trace having the hook and mackerel ﬁllet on the other end. The mackerel could then twist and turn just under the surface – very simple and often very effective. First, I needed to catch some of the mackerel for bait; I prefer whole ‘joeys’ but a on this occasion the mackere1 I caught were too big, so on went a ﬁllet.

I had a large drop-net but I knew it would be difﬁcult to manoeuvre in the strong tide and in the dark, so I was prepared to handline a bass up the wall if need be.

It was very dark when the moon was hidden by the clouds. The distant glow from the South Foreland lighthouse appeared through the blackness every few seconds. From the top of the wall I noticed the navigation lights of a ship quite close-in and heading towards the harbour entrance. A few minutes later its deck lights came on and the crew began preparing ropes and fenders. The ship was now heading straight towards my ﬁshing spot, and I assumed that an allowance was being made for the strong tide. 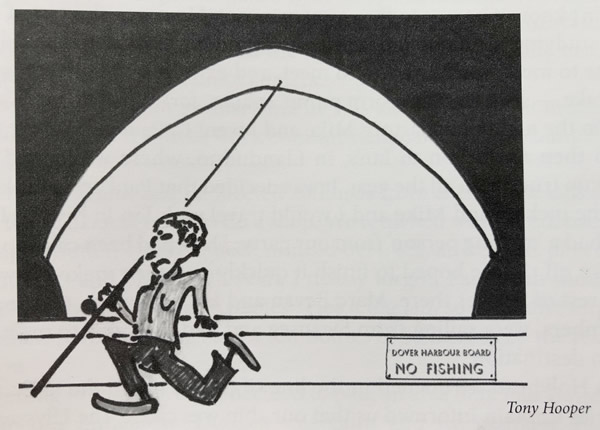 Within a few minutes the ship was very close and the sound of the engine throbbed steadily across the dark water. Anxious voices called out from the foredeck, which was now higher than my comfortable ﬁshing spot on the pier. The ship grew larger and larger, and I could see a cargo of timber stacked on the deck. The crew were now running aft and shouting loudly as they realized that they could not possibly make the entrance. At that moment I realized the same thing! I just had time to retrieve my tackle and run for it as the ship’s bow, now towering above me, hit the pier with a mighty crash and crumpling of metal.

It stayed there perfectly still for a few seconds, its bow pressing against the pier, the engine continuing its mufﬂed, rhythmic beat. Time seemed to stand still. The crew must have been stunned into a shocked silence. Then the tide began pushing the ship slowly along the pier, with a grinding of steel plating against the granite wall.

Suddenly, the engine stopped, and the ship turned and drifted out and away into the darkness. Then, just as suddenly, I heard the engine restart, and the ship slowly appeared again out of the black night, this time passing safely through the entrance and into the harbour. The crew were jabbering and shouting as it passed by. Eventually, the ship tied up alongside the pier at the shoreward end.

Quite how the ship managed to miss the 400 yard-wide entrance, or what the problem had been I never discovered. There was no damage to the stonework and, somewhat shaken, I continued ﬁshing, but the bass had made a run for it and did not return that evening!

The ship eventually discharged its cargo of timber and a few days later, several feet shorter with its crumpled bow sailed off for new ‘adventures’.