It was one of those days when I was at home and bored and when a decision had to be made. “To go, or not to go”, that was undoubtedly the question. The forecast was for rain and if the truth be told, the heavens looked full of it. The wind was from the Sou’west and despite the weather, conditions were looking good for a kipper.

I grabbed the rod and rucksack which were flung into the back of the car for the short drive and long walk to a recently successful mark which I hoped might afford some degree of shelter. It was the sort of place where you could almost guarantee a chance or two, especially in those days before it had been unrelentingly netted. I parked up by the roadside and walked down through the farm lane, across the field of cows and onto the path that led down to the beach. The trees on either side of the path met overhead and blocked out the darkening sky and, at the same time, dripped copious amounts of collected drizzle onto those foolish enough to pass below. I was already getting wet and still had to navigate my way across the beach, up the hill, through a neglected field of tall grasses, under a barbed wire fence and down the slippery shale cliff and onto the rocks below. 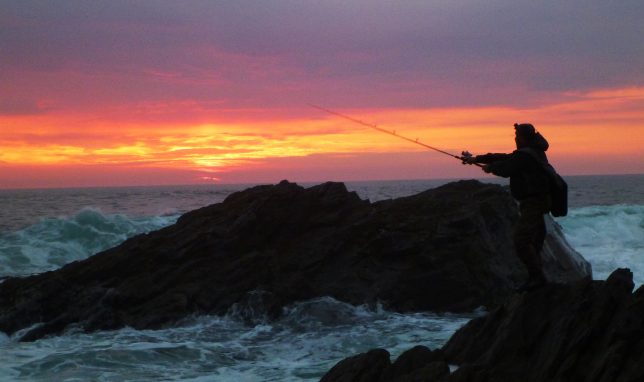 Staring out at an invisible horizon I was greeted by the sight of storm tossed waves breaking over black basalt rocks and dark clouds careering across rain torn skies. An old schooner, a ghostly apparition of a tall ship with little in the way of crew or sail, ran for the safety of Fowey and the Canis rock bell repeatedly clanged out an ominous warning. Cornish drizzle looked to soak the unwary and the edge of the wind was far keener than it should have been for a summer’s eve. Following little more than an imaginary path through the tall, wet grass and down through the rocky cleft in the cliff, I slithered, rather than climbed, down to the mark.

At sea level the swell was much higher than I had calculated, exposing reef and kelp covered rock as it drew back, gathered itself and reared up to thunder down on the rocks again. Conditions were not quite what I anticipated when I left the warmth of the house. I convinced myself that it was just about fishable apart from the fresh onshore wind which would make casting difficult to say the least.

I put on a lure, an IMA Hound, that would run a little deeper than normal and perhaps hold better in the swells. I had left the waders at home to travel light and was starting to realise my folly in coming under prepared. I did have my wellingtons and my waterproof wading jacket – tested and guaranteed to some ludicrous degree of water pressure. A hop onto a rocky outcrop and a quick thrash under the wind put the lure perhaps 25 yards at best. The retrieve, with one eye on the waves was hardly text book. The next few casts followed a similar pattern with the lure slicing into the wind only to be lifted and hurled back at me at the last moment. A heavier lure and a more powerful rod were required but you have what you have and I wasn’t about to walk home for a heavier set up. A few other lures were tried, more in hope than anticipation and all to no avail. I tried weighted SPs; I searched different areas and different depths, my concentration such that on two occasions waves caught me unaware and ran past me at knee height. My boots squelched and my jeans stuck cold and clammed to my legs as I shifted position. In this world of greys the wind shrieked and moaned, the heavens opened, the rain thundered against my scalp, got inside the hood and trickled down my neck and I wished, oh how I wished, that I has stayed at home.

To the South West the sky was darker still and with a deterioration in the already poor conditions imminent, the decision made to cut and run. Enough was enough and at least I had realised the futility of my situation. Traditionally upon making the decision to pack up I always give the Feed Shallow one final chance and I resolved to make my usual four last casts, although conditions were entirely inappropriate for such a shallow runner. The first pathetic attempt at a cast was tossed back in disdain and landed in the water at my feet. I stared at it, chilled to the bone, wet to my underwear, beaten and broken, totally defeated and dreading the mile long, uphill trudge back to the car. The rain hammered away at my wading jacket, determined to test it to the full and was finding its way into all manner of uncomfortable places. The elements had combined to show how totally inadequate, pathetic and laughable my new waterproof, breathable wading jacket with non corrosive nylon zippers actually was. My lure, drifting hopeless and helpless on the waters bore testimony to how complete my defeat had been.

They say it’s never over until that fat lady starts to sing. Perhaps she hadn’t let rip just yet but she had certainly stepped up to the microphone and was clearing her throat. While she drew in a deep breath, somewhere in the deep and dark depths below a primeval instinct alerted the killing machine of potential prey and up from the darkness of a weedy crevasse rocketed a silver missile, tail pumping and accelerating with each millisecond to hit the lure and lift itself, impaled and clear of the water. The rod hooped over with the bass still in mid air before it crashed tumbling back into the grim grey depths. It ran hard and deep taking line at will and twice I felt the leader rasp against barnacle coated rock. Four times I got her to the top and three times she dove again and against the clutch. I could feel each kick, each twist as she fought for her freedom. The rod arched and flexed and creaked and groaned and so did the angler. The only indicator of how the battle was progressing was the interval between the clicks on the clutch. Gradually these increased and I sensed that the course of the struggle was changing and I began to gain some semblance of control. I kept the pressure on, not allowing her a moment’s respite. After what felt like a full ten minutes I got her in and under the rock, ready to beach on the next wave. I had no net and she looked too large to risk lifting by the leader. All good things will come to those who wait and hardship and patience is always rewarded in the long run. I felt I deserved this one for being there and battling the elements but the waves which had marched inexorably shoreward all afternoon were suddenly no more. It appeared that all Neptune’s forces were conspiring against me. I could see the bass and she could see me but there was nothing either of us could do to turn the situation to our advantage. All I could do was keep a tight line and wait. I waited and waited for what seemed like hours but was probably only a few seconds. All I could think of was landing that fish and I was prepared to give just about anything to do so.

I made the usual promises and the wave duly came. It rose up well above my ankles and there was a sense of relief and weightlessness as the bass was lifted with it. There was no longer any feeling of wet or cold in my body. I felt happy and warm inside. The wave fell back and there on the exposed and draining rock, all silver and shiny, lay my lure; smashed and battered and twisted and broken and most probably dead as well. Of my opponent there was no sign.