Too Much To Soon?

Too Much To Soon? by Donovan Kelley

“The largest bass of the year, 17lb 1oz from the Blackwater estuary, was Peter Prentice’s ﬁrst bass, caught on his ﬁrst cast from Richard Parkinson’s “Amethyst” out of West Mersea. Another notable ﬁrst was Colin Fellowes’ l6-pounder, caught from the shore at Hythe on his ﬁrst attempt at ﬁshing, on an old cheap rod.”

That extract from one of my annual reviews of big bass was far from unusual. It happens every year that someone, somewhere, catches at ﬁrst try a bass which he is unlikely to better if he continues ﬁshing for years after. Some don’t continue: that ﬁrst huge ﬁsh was too easy – everything after would be anti-climax. But some, to their credit, do continue and become expert bass anglers. My own beginnings could not have been more different: my diaries record every detail of the harrowing odyssey. 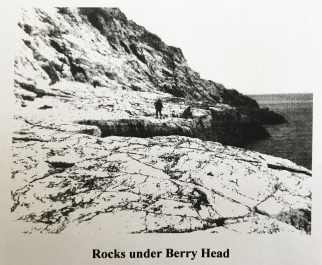 As a boy I fished often from the rocks under Berry Head, at the southern tip of Torbay. I was after Pollack, but I hoped my live prawn would attract the occasional bass. My first contact with one caught me completely unawares. I was fishing close in from a rock which dropped off sheer into deep water. The prawn was right under the rod-tip and was being slowly lowered to Pollack depth when it was seized by something which went off seawards at searing speed. Forty yards out it surfaced and threw the hook. It all happened so quickly that I hadn’t remotely gained control over the fish – and was left with little over myself. Later that summer I threw away a prawn that was no longer lively – and saw a large bass come up and absorb it. Later again I watched when a good one followed my prawn to the surface as I wound in. I waited in vain for it to take.

The next year I began seriously aiming for bass: same method (ﬂoat and live prawn) but ﬁshed shallower, with the prawn only ﬁve feet below the float. I tried some rocks just west of the Dart estuary and ﬁshed hard for ﬁve hours before I had a bite – then struck too soon. The bass, merely pricked, came to the surface and shook the hook out. It was about four pounds: huge to me, then. Next day, same place same tide, I hooked another and this time caught it: but it was a little one, 3/4lb. I still had it all to do. Later that year I was spinning from the rocks on the edge of the tide-race at Start Point. The conditions — calm and clear — were perfect for prawn; but I had no prawns and had to resort to spinning with artiﬁcial eel. Many ﬁsh followed the eel in, pollack as well as bass — but none took. I tried different sizes, different colours: all to no purpose. I ﬁnished the year as I had begun it, with still no sizeable bass to my credit.

The next year I explored some rocks outside the Yealm estuary, just east of Plymouth. I found a spot which to my inexperienced eye looked promising: a prominent rock with no great depth of water in front of it and on its left a narrow shallow gully which looked good for prawns. While I was watching a shoal of ﬁsh swim slowly by, just under the surface. My diary says bass, about one to three pounds apiece. In retrospect I wonder if they were mullet: bass don‘t show themselves so readily as these had done. However I gave the rock a try and a fortnight later when a similar tide came round. Conditions were better: water still clear but with a nice wash around the rocks to ensure that the ﬂoat would stay in position, a yard or two out. At intervals of half an hour I had five bites – and brought all five ﬁsh safely to the net: bass of 1 3/4 to 2 1/4 lbs each, and very lively on my shortened trout rod. At last, some sizable bass – just! A few days later I went out again and raised my celing to 2lb 10oz; then next time to 3lb 3oz; later to 3lb 12oz. Then the season, or at least my part in it, was over. I could hardly wait for the next season to begin. It began badly. Al my ﬁrst bite I committed – not for the ﬁrst time — the cardinal sin when ﬁshing prawn. I struck too soon. I merely pricked the ﬁsh – which then followed the prawn up as I wound it in. It was a bass of, I judged, 8 or 9 pounds: much too big a jump in size for the gradualism which seemed to be my fate. Two weeks later, same place, I found myself among ﬁsh of more suitable size. In two short evenings I caught ﬁve weighing 19 ½ pounds, the best 5lb 6oz. Then war put an end to the progression. 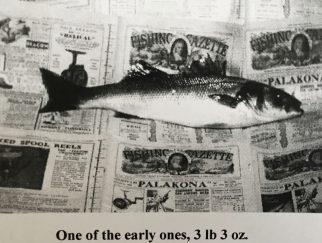 Returning in 1946 I found myself desperate to make up for the seven lost years. It was too early in the year for rock-ﬁshing and I tried legering with crab in a small estuary further east. Conditions on that ﬁrst try were quite hopeless: dead calm, clear water. I did get one small bite – and found that, inexplicably, the trace had broken on the strike, without any feeling that a ﬁsh had been hooked. The trace was of the new monofilament nylon which was to cause serious problems that year until I switched hack to the traditional natural silkworm gut. A day or two later I ﬁshed the same river-mouth in what proved perfect conditions. The water was peat-stained after heavy rain on Dartmoor and the bar-pool was full of bass. I at once caught the culprit of the broken trace, with it still dangling from its mouth. To my astonishment it was a good one, weighed later at 6lb 9oz. Then three more not much smaller, with in between more breakages. The season continued with many more ﬁsh of 3 to 6 pounds, but none heavier than that ﬁrst one.

In the following year, still legering, my best crept up to 7 pounds exactly; then in the next year to 7lb 8oz (that one on prawn, floatﬁshed from rocks). Another year and another rise, to 9lb 5oz. There I stuck for twenty years, with fairly frequent 7 and 8 pounders and one other over 9 pounds; but none to heat 9lb 5oz. l was now getting more deeply involved in research, and mere weights became less signiﬁcant than lengths. We never weighed the tagged ﬁsh – it would have wasted precious time. We did measure them all, girth as well as length, and that gave a sufﬁciently accurate pointer to weight.

That has remained the normal practice, and so far as I know only two of my rod-caught bass have been over 10 pounds: the best about 11 pounds. When the small beach-seine was in use, to maximise numbers for tagging, we did get one of ahout 12 pounds. Apart from that there were very few over 7 pounds. There is in fact, in tagging and most other research activities, no special virtue in going for really large ﬁsh – and I have never done so. One learns more about bass from the run-of-the-mill adult ﬁsh than from the rare freaks. No doubt my slow progress – 6 years to reach 7 pounds was a price of that policy! I would not have had it otherwise.