To catch bass on a ﬂy ﬁrst you have to ﬁnd some bass within casting range. If you are a ﬂy ﬁsherman this might be the difficult part. On the other hand if you are a bass angler already then learning to ﬂy cast will be your difficulty. There are lots of possibilities for different types of coastline and calm settled conditions are not the only weather conditions that the method will work in. I have only scratched the surface of the possibilities there may be. Personally I ﬁnd the limiting factor in exploring different areas and experimenting, is casting ability. Prospecting new areas, when you are on the move every few casts, use a half-mile of coastline, hard work with a ﬂy rod. Coping with head winds, waves, wading looking where your feet are all the time, is a lot easier if your casting technique requires as little physical effort on your part as possible. 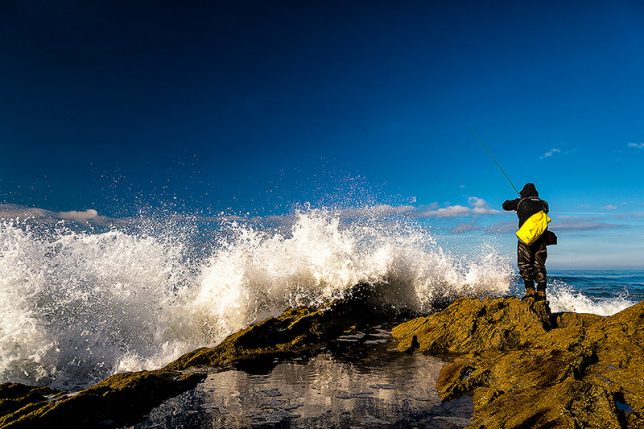 I won’t go into a descriptive list of the tackle you need but the following are a few of my ﬁndings and tips. Apart from the obvious items of tackle like rods, reels, ﬂies etc. my most important item is a line tray, to hold retrieved line out of the water. I use a washing-up bowl lined with synthetic grass, lengths of stiff nylon might hold the coils better than the synthetic grass but I haven’t tried yet. Fishing without one in the sea is something I ﬁnd very difﬁcult. Loose line gets washed backwards and forwards by even small waves. Mine is strapped around my waist with nylon webbing and a quick release buckle. Bungee cord seems to be another popular method of attachment. I haven’t fallen over, or in yet, but if I do I want to be able to get the bowl off quick! Both Mike Oliver and I built a 10 foot number 9 rod the extra length helps a bit when you are wading up to your waist. We chose a heavier rod on the premise that it would be more versatile, cast a bigger ﬂy, bully ﬁsh and cope with casting into a sea breeze. If a 9′ 6″ number 7-9 is the standard lure rod for reservoir trout ﬁshing, it would be safe to assume, that in the more brutal environment of the sea it would need more power. I have used this rod for all of my bass ﬁshing and I’ve been glad of its power when playing ﬁsh in rougher conditions.

Initially there is no need to buy a special rod until you are convinced of the need. Any trout reservoir rod would do in calm conditions, the main limitations of a number 6-7 or a number 7-8 rod would be the size of ﬂy it can chuck. If you can get a big ﬂy in front of a bass it will eat it as happily as anything else. I ﬁnd single handed rods heavier than a number 9 hard work to cast with for a long period of time. Even with a number 9 weight I will use a strap around my wrist, to take some of the strain out of casting, particularly if I am doing it every day all day for a few days. As for reels I am not convinced of the need to buy expensive models, if I had it to spend I would prefer to spend that money on extra trips. As recommended by several American authors as being cheap but adequate, I purchased a Pﬂuger Medalist 2782. Although it’s a bit heavy I am pleased with it. 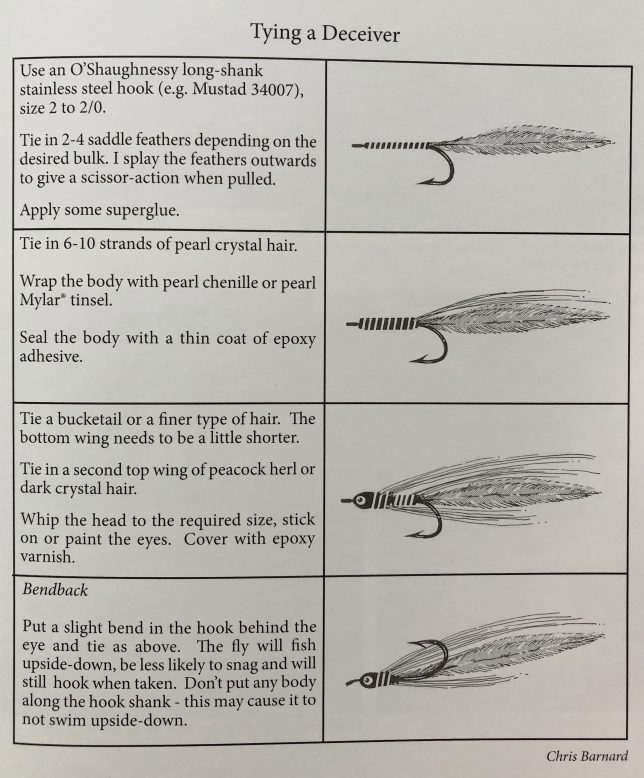 Most of the time I use a medium sink or immediate shooting head. All my heads have whipped loops at the end so I can change them easily. For running line I use 30lb, braided Cortland line which works a treat. It does not tangle as much as monoﬁlament and I have not had any problems using it with a wading basket. My leaders are normally 5-10′ of 15lb monoﬁlament straight through. I have not explored using anything more sophisticated. Mike tends to use 10lb but the bass don’t seem to be shy of either. I use 15lb on the premise that I want to have everything as strong as possible in case I get a smash take from a good ﬁsh, a prolonged ﬁght, or the line touching rocks etc. during a ﬁght.

As for ﬂies I generally use a 4-5 inches white deceiver on a 1/0 34007 stainless steel Mustad. I always take a ﬁle to the barb which is so big I am not conﬁdent of setting it with such a soft rod as a ﬂy rod. My ﬂies are checked before use for sharpness. Personally I don’t think tandem hooks are much of an advantage, they are certainly more difficult to cast. Epoxy Sandeel imitations and Bendback Deceiver ﬂies have also caught me ﬁsh. I have been carrying a Maggot ﬂy which is two maggot shaped pieces of ethafoam tied to a hook. The idea is to add a couple of maggots and use them when mullet and bass are feeding on seaweed ﬂy maggots, which at times are washed out of piles of rotting seaweed, they have not been used yet but I am assured they work. Some anglers have found bass that can be very fussy but I do not think this is normal bass behaviour.

One May I managed to get to the Welsh coast for a few days. The weather was hot and calm. I got up at 5.00am went ﬁshing and was back by 7.00am. Using the experience from the previous year in Ireland I caught and returned three bass to 2lb 8oz. I was delighted to have done fairly well in an area I had never ﬁshed before, for what was about one hour’s actual ﬁshing.

The following day at 2.00pm I should have been on my way home but I went to have a look at a mark on the way. It was very bright and sweltering hot. By the time I had got there I was regretting that I had worn neoprene chest waders and taken a rod. At the most I could only have thirty minutes ﬁshing. All I was expecting was to get an idea during daytime of where to wade and how to ﬁsh it. The conditions were not what I’d have chosen. The weather was perfect for ﬁshing at dawn or dusk, but not during the middle of the day.

Using a bend back ﬂy as there was quite a lot of weed, I had a few casts. I waded around had a few more casts, my mind was really on forming a mental picture of where I would wade in safety on a return trip. Moving again I cast mechanically and waited a while for the line to sink. The ﬂy slowly swept around in the current and on the ﬁrst pull of the retrieve, I had a very solid take. This was not what I had expected! There were one or two people around and some people ﬁshing in the distance. During the ﬁght I was concerned that the screaming of my reel would attract them and they might realize where bass were and the effectiveness of my method.

The ﬁsh took a lot of line and it was reassuring to have a strong 10 foot number 9 rod. I had to pump the ﬁsh to regain line against the current. I couldn’t wade towards it without getting wet. After a short ﬁght I landed it, the ﬁsh weighing 5lb 4oz. A good ﬁsh for seemingly bad conditions, because I was not expecting to catch anything.

Regarding safety, I always wear sunglasses when casting during the day. At night I have a pair of clear safety glasses. A couple of years ago I read an account of someone getting a ﬂy hook in their eye, and even though they were not blinded It sounded extremely unpleasant. I have automatic/manual self-inﬂating life jacket/braces; I always wear it when I am on my own at night. Also it is reassuring to have it on when wading an area I do not know well, especially in and around estuaries.

So far I have only scratched the surface of the potential sport in ﬂy ﬁshing for bass, but I have had tremendous fun already. It is my intention to have more time in the future to reap the rewards of the experience I have gained. Sooner or later I’m going to be in the right place at the right time and catch a really big bass on a ﬂy rod.

Historical note: This article was published in BASS magazine no.88 Winter 1998