On a recent trip to the South coast of Ireland, I was fortunate enough to hook and land a stunning bass around the 7lb mark! Not an outright monster, but it was a solid, heavy set, open coast slab and nailing her in fizzed up conditions … well, it doesn’t get much better!

I have written several articles in the past which have looked at ways to make your tackle more bass friendly – especially regarding plugs. Without going over old ground, the basics revolve around removing unnecessary trebles and looking at crushing the barbs to aid unhooking or avoid causing undue damage to the fish and angler.

Most of the time, the bass I catch are relatively easily unhooked and it takes only a brief flick of the pliers to free the trebles and set the fish on its way. However, things didn’t look so simple when I landed this bar of silver on my last trip. 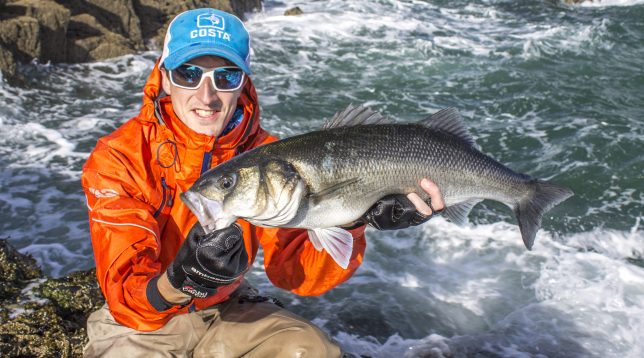 If Carlsberg did bass conditions this would be it … the onshore wind had picked up and was now blowing around 20 mph. The water had begun to turn slightly milky but still had a good 6 feet of clarity and by this stage, the crashing waves on the rocks had created large, oxygen rich areas around the structure – all we needed were the bass to show up!

As you can imagine, it didn’t take long before we connected with a few nice fish around the 4lb mark – all well fed and chunky little chaps! It was already a cracking session with bass now smashing bait on the surface … little did I know it was about to go to a whole new level.

I made a cast to the right of a large exposed boulder and just as the lure came through the chaos, the rod slammed over – this was a better fish! After some deep runs and large headshakes I had secured the fish on the boga grip and had the bass safely in a rock pool. As soon as I had the fish in the pool, I reached for my pliers and then I realised something wasn’t right … I couldn’t see the lure!

The bass had completely engulfed my Megabass Gataride 120 (Pearl Rainbow) and the bib was now showing a good two inches down behind the lips … it was deep and dangerously close to the gills … it wasn’t looking good.

As common practice, I remove the middle treble and de-barb the majority of my hard lures but even still, this was turning into a potential nightmare. Thankfully, the fish wasn’t bleeding so I opened up the mouth, reached down, gripped the treble and with one sharp knock, I dislodged it and quickly popped out the second one.

Instantly, I got the fish back down to the edge of the water where there was a significant amount of turbulence and therefore oxygen. About 30 seconds later the fish was fully revived, strong and ready to go – it was lifted up once for a super fast photo and off she swam back into the maelstrom that was now boiling all around us.

In my opinion, this was the prime example where taking the time to make your lures a little more fish friendly really pays off. I am convinced that if all the trebles had remained with the barbs left on, this story would have been a lot different. If we are to practice catch and release, then we must be looking at these details which will greatly increase the successful, safe release of a bass after capture.

I am aware there will be those who do keep fish in compliance with the minimum landing size (MLS) but the fact is, we have no control over the size of fish which hits our lure. The last thing you want is to hook an undersized fish or in fact a large, prime spawning specimen and put it at risk due to poor fishing practice.

I think if we do our best to ensure the bass we target are safely landed, with the least amount of stress and damage, then we can make an informed and sensible decision as to whether or not it is released. Personally, I put all my fish back and I know a lot of anglers are also following this path but the decision should be ours to make … not having it already made due to excess steel and barbs creating problems which can be avoided.

Hopefully, some food for thought … for me it was a reinforcement of the effect these minor changes have and consequently, how not making the simple alterations, could have led to the demise of such a stunning creature.

First published in Sea Angler in 2016