Underwater Colour – What The Fish See Deep Down

Underwater Colour – What The Fish See Deep Down

Daylight consists of the colours of the spectrum, which are red, orange, yellow, green, blue, indigo and violet. As light passes down through sea water these colours are absorbed in turn as the depth increases, so in the upper layers the less red/orange/yellow an item will appear, and further down the more green or blue it will seem. This explains why underwater movies tend to be in shades of blue or blue/green.

However, our coastal waters also contain the products of decaying vegetable matter (as well as the usual, sand shell and other particles). These absorb much of the light at the blue end of the spectrum, some green light and relatively little yellow or red. If these substances occur in sufficient quantities they tend to absorb most of the blue light, with the water absorbing the red and yellow, leaving the green, which is why our coastal waters often appear green. 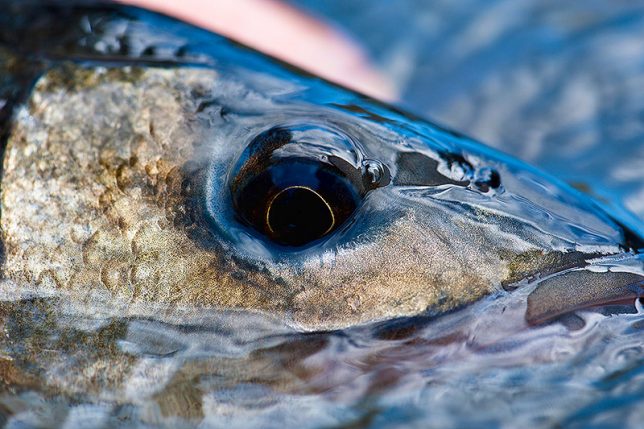 Bob Gledhill has experimented with different colours and colour combinations while ﬁshing over wrecks in over 240 feet. The results, he concluded, were that colours did not make any difference. The reason is simple and fundamental. At that depth all lures appear black, because all colours have been absorbed by the water.

I believe that several factors affect our choice of lure colour; the success of a lure may not be directly attributable to its colour, but more as a result of its apparent contrast with its surroundings. I believe that under certain conditions, a speciﬁc colour will offer greater contrast in relation to its surroundings. Thus the lure becomes more apparent to the ﬁsh, which in turn enables the angler to potentially catch more ﬁsh. As an example, I once accompanied my angling buddy Pete on a wrecking trip out of Swansea. With 12 other anglers aboard we all lure ﬁshed and Pete and I accounted for about 60 per cent of a mixed catch. We had opted for a grey coloured rubber eel, while the others used the traditional red or orange colours. It was signiﬁcant that when we changed colour (as a result of losing a lure on a wreck) our catch rate dropped. A return to grey improved the catch rate immediately. This was not an isolated instance. Other trips to that area showed continued success with this particular colour choice in preference to others.

I’m not suggesting anglers should ﬁsh exclusively with this colour, or any other colour for that matter, as I believe that the angler that is armed with a choice of lure colours can enjoy better success, simply by being able to ring the changes. J.F. Garrad (‘Seangler‘) in his book Sea Angling With the Baited Spoon has, I feel, come closer to the truths of colour and contrast in angling than anybody else. Following years of experiments he concluded that towards nightfall the materials he had been experimenting with ceased to be effective in the following order: copper, brass, chrome, white. That is to say that as the light faded, copper ceased to catch ﬁsh, brass lures ﬁshed longer, chrome plated lures ﬁshed well into dusk, and his white painted spoons continued to be effective until it became quite dark. If we examine that statement it will become apparent that the most significant factor relating to each material’s success is its degree of contrast when viewed, as the ﬁsh would see it, against the deteriorating background of the sky, Obviously at near darkness, white is more visible than copper, purely because it contrasts against the darkness to a greater degree. On the Other hand he noted that under brilliant sunshine, red lures were more effective than plated or white lures, again simply because they afforded more contrast than the others.

Have you ever considered why many species of ﬁsh are counter-shaded, graduating from a dark back to silvery or white underside? It is a protective response to the play of light, both around and upon the form of ﬁshes?

As previously explained, when looking downward in water the background is dark, due to the light being scattered and absorbed by the water. The dark backs of food ﬁsh have low contrast with the dark background, blending in when seen from above by predators such as gulls. When viewed from the side with the light behind the ﬁsh, its whole form will tend to merge with the background.

In Angling magazine an article on ﬁsh vision stated that silver becomes a broken mixture of unabsorbed green and grey colours, and is therefore perfect camouﬂage! This would explain why the sides of food-ﬁsh are predominantly silver. It also said that yellow shows up best underwater (hence the reason for yellow markings on diving kit), therefore gold is assumed to be the most visible colour for lures. In addition it said that black lures are best for clear and shallow waters (presumably because to a ﬁsh it gives the best contrast against the illuminated surface).

Two books covering ﬁsh vision and colour perception are Through the Fish’s Eye by Mark Sosin and John Clark, and What Fish See by Colin J.Kageyama.

Much of my sport is due to applying these thoughts to the choice of lure when spinning or plugging. So I suggest that before you clip on ‘old faithful’, spare a thought for such factors as sky brightness, water depth and water clarity – your prospects could improve dramatically.

Historical note: This article was published in BASS magazine no.41 Autumn 1986