In recent years a few friends and I have been fishing for bass around north Wales and closer to home in Morecambe Bay. For the most part we have been exploring new venues and experimenting with new techniques. However, recently I took my current personal best fly-caught bass on a new fly I’m developing. At last I think I’m getting somewhere. 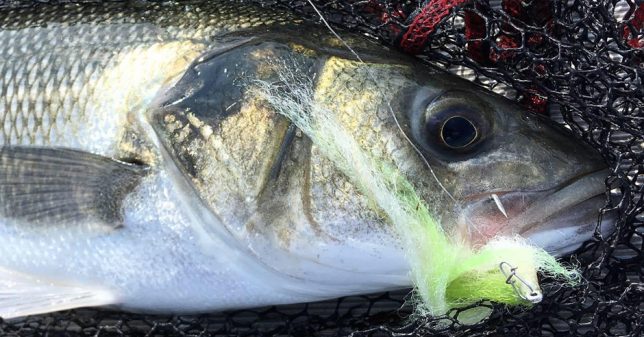 Accompanying me on this trip was Steve, my regular pike fishing buddy. I had fished the mark before but for Steve it was the first time. The previous summer, using the Chug Bug, I had taken a nice bass there, and felt that with a little forethought and careful selection of tides, we might do well with the fly gear. As one faces out to sea there is a gently sloping beach, and to the left is a small freshwater brook containing many trout of about four inches in length, and a fair run of adult sea trout.

Our focus was to be bass, inhabitants of a reef that is wadeable only on extreme low water of the biggest tides. The first of these lows was on a Friday afternoon and the next, at 4.30am, coincided with dawn the following morning. The plan was to fish the first low, allowing us to be pushed back by the rising tide, until our casts were no longer able to cover the reef. We would then have some food and a sleep in the back of Steve’s people carrier.

Arriving at the beach we found other anglers already there. Some were bait fishing, and others, including an angler I already knew, were fly fishing. When we fly fish our local trout rivers, such a group of anglers would be quite a worry to us, but, in saltwater locations I have found company to be less of a problem as long as everyone acts with consideration for others. There is always plenty of water to have a go at, and the fish tend to move along with the tide, so everyone gets a fair chance at them. 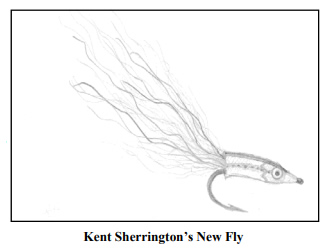 We rigged up with poppers and floating lines on our nine-weight saltwater fly rods. The water was gin-clear and the light offshore wind made casting easy. Initially nothing showed for either the bait anglers or us. Quite rapidly we were being pushed back out of casting range of the reef by the fast rising tide. I decided to put on one of my new sandeel flies[1] Because with it I could make the ninety foot casts that were becoming necessary. After ten minutes I had my first take, but being distracted by talking to Steve I missed it. However, two or three casts later I got another opportunity and this time I made no mistake. A small school bass was soon brought to hand; the barbless hook was quickly inverted and the fish set free. After this initial small success, nothing else showed.

I wondered whether my brightly coloured fly line could be scaring the bass in the crystal clear water. I decided that in the morning I would change to a clear intermediate sinking line, with the same fly. Steve said he would persevere with the floating line, but try one of my successful flies rather than a popper. The three hours of sleep before the morning start passed slowly in the car, yet when my mobile phone alarm went off at 3.30am, it seemed all too brief. Strange that, isn’t it?

Wading out with Steve on my right and the brook on my left, I made a few casts over the weed-covered reef. I didn’t yet have that confident feeling, because I was only going through the motions of casting and retrieving, so I stopped and spent the next twenty minutes studying the action of the waves on the reef and the position of the visible rocks and weed. After a while I worked out there was a definite shallowing up in front of me at the point where I was casting, and then a deeper channel, then more shallow water on the far side. It was possible to see the waves flattening as they met the deeper water, and there was also an absence of any rocks or bladder wrack on the surface. I thought that perhaps the bass might use this as a ‘highway’ onto the reef as the tide flooded. I called Steve over and he agreed it was worth a shot. We waded out further (I want to emphasise at this stage that we always wear self-inflating life jackets for this sort of fishing). Soon I was into the first bass. It was quite small but went quite well for its size. The bass, soon subdued, was released to grow bigger than its present twelve inches. For the next twenty minutes nothing turned up, and by this stage the tide had really started to flood. We decided to return more or less to our original positions, but slightly more to the right. Quickly I was into another bass, perhaps a little bigger than the first.

I was aware that Steve had yet to catch, so I moved further along, allowing him access to the seemingly more productive water. I moved off the reef onto the sandy bottom nearer the shore. Steve still wasn’t faring any better, and as the tide was now getting too deep for comfort we both waded inshore along the beach and to the right of our starting point, looking for fish or structure that may be worth a try. Then, almost as we were about to give up, I sighted some boulders with a weed line nearly on the shore, in about three feet of water Cautiously wading closer, I made a cast with the clear intermediate line from about fifty feet away and angled parallel along the edge of the weeds. Thump! A good fish connected with my fly. It fought valiantly and I was glad I had tooled up correctly with 10lb fluorocarbon tippet and a nine-weight rod equipped with a good saltwater disc drag reel. I said to Steve, “This is a better one mate, perhaps five-pounds or so”. When it came up and did its bulldog head-shaking bit, he agreed. “Yes, and perhaps a bit more, Kent!”

At first I thought it best to back up to the nearby shore, but the bass was having none of it, trying to get amongst those boulders and cut me off so I pulled it away with some heavy side strain. Eventually, I ‘lipped’ it in the open water. This bass was around 6lb, and being such a magnificent creature I felt it would be a great shame to kill it. So, as we do with all our bass (even though we both like fish to eat), it was returned to live on.

How did Steve do? Well, even though I ‘retired’ after this fish to fry up the egg and bacon for breakfast, he still remained fishless. Doubtless he will, in due course, give me another thrashing with the grayling on the river Ure. I think that the main reason for my success was the use of the clear intermediate line, whilst Steve had persevered with a yellow floating line.

[1]‘Body in Mylar’, rather like Bob Povic’s ‘Surf Candy’ but without the epoxy covering. No hair other than that coming out as a ‘tail’.

Sonnet of the Surf

Amidst the pounding surf and swell

A gleaming bar, alive and well

Salt on my lips, wind on my face

I hear the sounds of this special place

From dusk ‘till dawn with hope and time

Waiting to feel you on the line

In a moments haste you engulf the bait

Bringing us together, sealing our fate

The duel is over, the fight is won

In respect I return you to the waves

And say goodbye to one of Nature’s braves

Upon my mind I will always be impressed

Meeting that warrior of the foaming crest.