[Comment – this article also appears as an advert in the November 2005 issue of ‘Sea Angler’ magazine, paid for from funds donated to the BASS restoration project.
If you prefer, you can download the original article as a pdf file (208KB). It is also possible to download a Welsh version (text only) as a pdf file (56KB).
You will require a copy of Acrobat Reader to read the pdf file, a free download is available from the Adobe website.]

In the very near future, Defra will begin a public consultation, which proposes to increase the Minimum Legal Size (MLS) at which a bass can be retained by anybody in England and Wales. 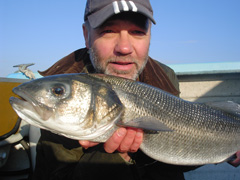 The proposal is that the MLS should go from 36cms (just over 14 inches) to 45cms (just under 18 inches), so an increase of 9cms or little more than 3.5 inches. Proposals to increase commercial net mesh sizes to reduce accidental capture of bass below 45cm will also be part of this consultation, to ensure that most bass will be given the chance to spawn at least once.

The consultation, on raising the MLS, will be the first of a series of consultations, which will later include,

All of these conservation proposals will be designed to increase the number and size of bass in our coastal waters, and will have a knock-on effect, which will help improve the quality of sea angling for all.

For some anglers, the reasons behind a proposal to increase the minimum size for bass may still not be clear. After all, many of us currently do not catch many bass bigger than 36cm (1lb) – so why is a 45cm (2lb) limit being proposed?

At the current time most anglers in the UK mainly catch small bass – because that’s all there is to catch. The bigger fish have been seriously reduced in numbers, by years of over-fishing. It’s true that some lucky or skillful anglers catch a few bigger bass, but there are nowhere near as many big bass as there used to be.

There are however, lots of small bass around – due to favourable climatic conditions the bass nursery areas are producing record numbers and our warmer winters are increasing the survival of these little bass. But, before those small bass become big enough to put a decent bend in your rod, they are taken by the commercial fishery when they are between 36-45 cms (mostly by British vessels fishing within our own 6-mile limit) and very few bass now survive to become adults – fish worth angling for.

How much better would it be to have a good chance of catching the same numbers of bass – but two or three times as big!

If the minimum size for bass was increased to 45cm it would mean the following for anglers:-

It is common sense really –
1. Reduce the number of immature fish being taken by fishermen

This approach has already produced staggering increases in the numbers and size of striped bass for anglers in the USA – why should we not have the same in the UK? After years of campaigning, sea angling representatives are at last being taken very seriously and this is our first chance at driving through changes designed to benefit our fisheries and our sport.

Don’t just sit there – do something!
During the consultation period, your help is urgently needed. To ensure that these proposals, to increase the MLS of bass, along with other measures – like bringing in netting restrictions and commercial licencing – will ultimately result in :

Watch for the Defra public consultation and participate by making a written response, to make the changes for improved sea fishing a reality.