Mora stayed feeding in the open area of the harbour until the early snow water began to come down from the hills, and the continuously cold winds cooled the water sufficiently to make her swim out to the deeps. As she travelled out towards the wreck that was to be her winter home, she came to the warm water discharged two miles offshore from the atomic power station on the headland. Mora felt the rise in temperature that carried many miles on the flow of the tide, and turning, she swam uptide towards the source of the warmth. Because the flow from the outfall was permanent, a luxuriant growth of weed had developed on the sea bed; long ribbons of kelp harboured crabs and lobsters, whilst great pollack lay in wait, poised to dart out on the passing fry. 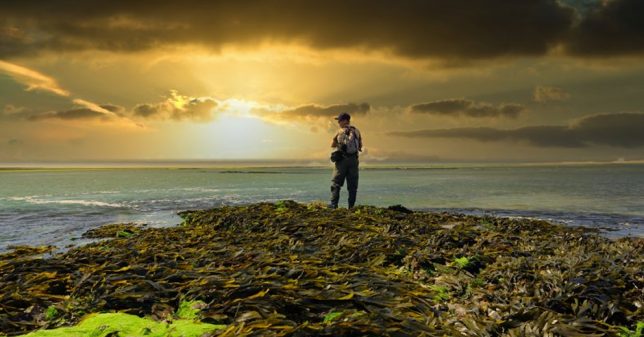 Others too had felt the influence of this comfortable band in the surrounding cold water, and the nearer she swam to the outfall the more fish she found to be milling about in the temperate zone. Many of the larger fish swam at the junction of the warm and cool currents, whilst the fry, sandeels and school fish played in the warmest part, darting to and fro at particles of detritus carried in the stream. Mora found a mass of Aphrodite (the sea mouse) on the sea bed and fed avidly on them whilst big plaice had risen to midwater to take the sandeels. In the cold water nearby the migrating cod and whiting took time out from their pursuit of the pilchard shoals to feed on the bounty.

Porpoises found the warm water as they moved south, and started to decimate the bass, cod and sea trout. Their stay was short lived; a thirty foot piebald male killer whale led his pack on the attack. Homing in on the porpoises with the use of sonar, their jagged saw-like teeth cut into the warm-blooded creatures, tearing them to pieces in moments. Orca pressed home his attack in a frenzy to satisfy his greed. The fear-crazed porpoises leapt clear of the sea in an attempt to escape, to be followed by an enormous blue-black and white livid mass in pursuit, the great scimitar dorsal fin cleaving the water. The winter-green sea was churned into a froth, stained with the blood of the massacred porpoises. The killers fed on the carcases whilst the surviving porpoises fled from the scene.

For days the air resounded to the clamour of the gulls tearing at the floating remnants of the carnage. The killer whales had departed leaving various scavengers, both above and beneath the surface, to clear up the mess.

Mora had witnessed the incredible speed and ferocity of the attack, and her instinctive response was to depart from the scene of such a well-stocked larder. Her journey out to the wreck was the longest of her annual movements, and with a dozen of her larger cousins who had been feeding with her, she set off.

The s.s. Kittiwake had taken a torpedo amidships whilst steaming homewards in convoy off the southeast coast of Ireland, and after bravely limping up the English Channel, was overcome by a storm only three days from port. She lay on 200 feet down, and in 28 years her hull and armaments cargo had become host to a great variety of tenants. The channel water that flowed over the Kittiwake was maintained at a warmer temperature by the influence of the North Atlantic Drift than the shallower waters closer inshore, and Mora could rest up here until late spring without having to make the long migration run to the sub-tropics, where her species rightly belonged.

As she and her companions neared the barnacle-encrusted wreck they were joined by other bass of her birth year, who also came annually to this refuge. They swam together and carefully inspected their home, to make sure that it was safe for occupation. Mora entered the hull through the gaping hole that had been ripped by the torpedo. Inside, the water was very still, in contrast to the tidal flow outside. Some small pouting and wrasse lurked in the dark interior and Mora chased them out unceremoniously. For a few days she came out of the hull at slack water to feed, but her forays became more infrequent until she finally settled down, her buoyancy adjusted so that she rested with pelvic fins just clear of the ship’s plates.

Here she stayed, undisturbed, her metabolism slowed right down, living on the fat stores built up during the months of rich feeding on the reef. During this resting period the forces of nature continued to work, and the parasites to which Mora was host were attended to by the cleaner-shrimps which came and went quietly about their business, removing the fungus growths as she lay in the dark cavern. In due time the new water would call for a return to the reef.