There was a different blog post lined up for today but given the reports coming in from the crusaders in the Cape we thought an update to the progress of the BASS members currently in USA was in order.

John Morgan has been updating the visitors to The BASS Forum to give a flavour of what is happening out there. The report below is his post from Saturday when the fishing really took off.  Yet as this BASS blog is put together it seems the catching got even better today (Sunday) given Si Lewis recently texted 3 words;  “mental mental mental.” Given those who he is sharing a house with it is just possible this represents his amateur diagnosis, however, on balance, rather than a cry for help, it is more likely the exclamation of a exhausted but happy man, surrounded by fish, lacking time and energy to text any more. Either way John’s next forum post is now greatly anticipated.

Even though we were on the bank well before 4am there were still anglers there ahead of us . . . but we weren’t surprised by that, after all, Memorial Day is a major event and Bank Holiday for the Americans. The weather was still windy, damp and cold, but nothing could alter the fact that these were the first major tides for the Canal. The warm water from the south was pushing up, we had big tides, plus the river herring run was in progress. The weather was the one factor that could spoil the parade. But we weren’t going to let that one element stop us putting in maximum effort. We had to split up as there wasn’t sufficient space in one spot for us all to fish together. Ian, Jan and Simon got in next to each other whilst I walked further up with Malcolm. The darkness cloaked us and, whilst the wind whistled in the trees and the rain pattered incessantly, the canal glided by, oily and calm, its surface only disturbed by the powerful current as it eddied and whirled. Dark and brooding we wondered what its depths contained . . . and would today bring us reward for our journey and efforts. Cometh the hour, cometh the man . . . . each member of the team favours slightly different lures. Malcolm likes his surface lures, Si his SP’s, Ian likes a bit of everything whilst Jan was fishing lighter lures. I have been enamoured by the Sebile Stick Shad and with its close profile to the river herring I was intent on fishing it to the exclusion of everything else. Sport was slow and, though I wasn’t with them, I learnt later that Jan had the first take . . . but the fish came off.

First light came and went with no indication, where Malcolm and I were fishing, that there was any life within the silent waters in front of us . . . as we fished on, more anglers started to appear. As with any predictable migration whether on the African savannah, or salmon into the rivers of Alaska the predators ‘know’, and gather to take advantage. In our scenario there are two migrations in play, the river herring to their spawning grounds, on whom the stripers (and bluefish) prey and on those two predators come earth’s greatest predator: Man! At around 5am two cyclists (many American anglers use bikes to travel the access paths which traverse both sides of the Canal) stopped behind me at the top of the bank . . . they were considering whether to fish here or move on; unfortunately their decision on what to do was assisted by, as a certain Mr. Thomas would put it, “there being a violent seizure”. My rod lurched round and the Van Staal drag started to sing . . . . Game On! Before I’d got the fish to shore (it was small only 6 or 7lbs) the two Americans had ‘installed’ themselves either side of me – well and truly ‘mugged’.
Both Malcolm and I, and the other anglers, started to pick up fish with regularity . . . . 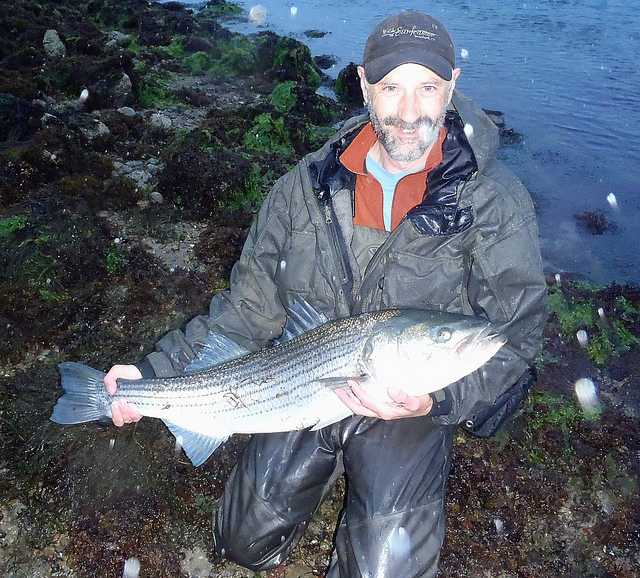 As the sky lightened we began to see that there was certainly life in the water . . . hundreds of river herring clung to the shoreline, in the same way that a frightened child would cling to its mothers skirts. They moved in pods up and down the shore, the water occasionally splashing frantically as they reacted to some movement out in the shadowy depths alongside them.

I picked up fish with regularity . . . and then the water over a ten yard stretch between me, the American to my right and Malcolm beyond him erupted as a pod of big stripers smashed into a shoal of the herring. We could see the enormous torpedo shapes gliding effortlessly though the clear water . . . they were too close to cast to, all we could do was lob beyond the carnage, and within seconds all three of us had hooked fish. My cast didn’t go more than ten yards and at about five yards out I saw the dark shape arrow out of the deeper water, a massive mouth gaped, inhaled the lure . . . . . and then all hell broke loose! At such short range the fight was short but exceedingly brutal a tussle between an elemental creature and an adrenalin fuelled angler. I won . . . but I think it was a close thing. With the fish landed I could only repeat (several times) a fairly well know Anglo-Saxon expletive, much to the amusement of the closest American. I went to lift the fish and gasped at the weight and the fact that I could barely get my arms around its enormous girth this fish was huge. I carried it over to Malcolm we measured it at 42”. The variation of weight of a fish of that length is somewhere between 25 – 33lbs . . . I have no doubt in my mind that my fish was just shy of thirty pounds. 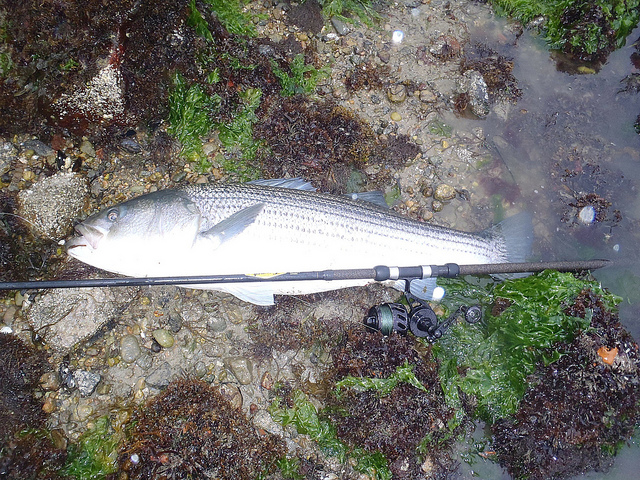 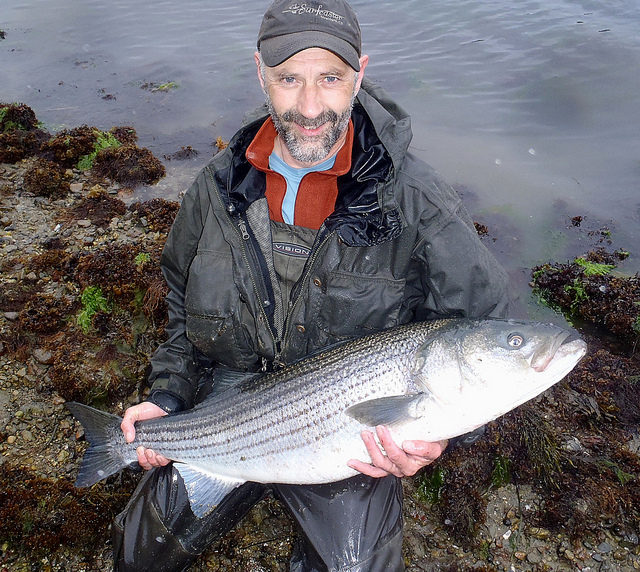 I think we called it a day at about 9am. The bite had ceased and breakfast was in order!

One of Si’s fish 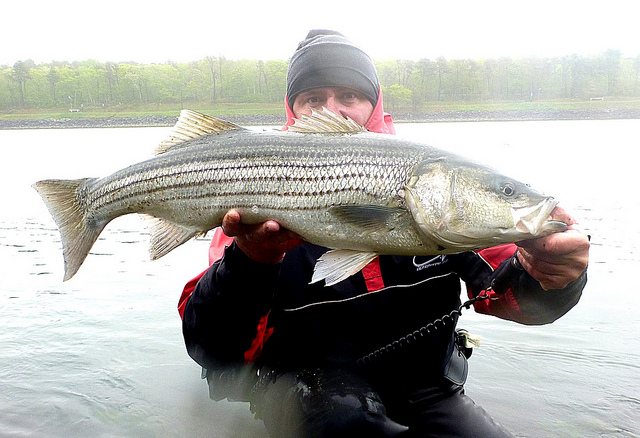 I don’t know how many what size fish Malcolm had but I think he had roughly the same number as me.

After breakfast we returned to the house to re-group and catch some rest. I sat on the bed to try and collect my thoughts and check my notes so that I could attempt to bring the blog up to date . . . but exhaustion overtook me and the fatal mistake of ‘just ten minutes’ was made. I was woken at 16:30 by voices time to get ready to fish.

It was a no brainer that we would return to the Canal. On arrival it wasn’t good news we’d missed the bite which had occurred on the turn of the tide . . . as we walked down the red access steps we saw a reasonable fish being landed at the bottom. We encountered the two anglers who had mugged me that morning (they’d turned out to be really nice, friendly guys) they informed us of our misfortune and said that there were still the odd fish being caught but that it was hard going.

We spread out with Ian and Simon fishing together and Malc, Jan and Myself moving further up the bank towards the Sandwich end of the Canal. Once again Jan had the first hit and, as it happened, on the same lure as yesterday, but, as with yesterday, it came off. I landed a schoolie of about 3lbs as did Jan whilst Malcolm lost a fish. With nothing much happening your attention starts to wander and, as is the way, my eye was caught by a disturbance hard against the bank we were on and about two or three hundred yards away. It had to be investigated. I found a pod of river herring . . . the water above them rippling as if their nervousness was being transferred to the water surface. I started casting. Working the stick shad in various directions and making sure that I worked it right along the bank. No just reeling it in once it had got near the bank. It paid off. Another ‘violent seizure’ was my reward, and a punishing scrap ensued . . . . suffice to say I beached a cracker which went 20lbs dead on my Boga. At 9pm (we’d started at 6pm) we packed up and headed back to the house. Tomorrow was THE best tide . . . we needed to prepare and sleep. 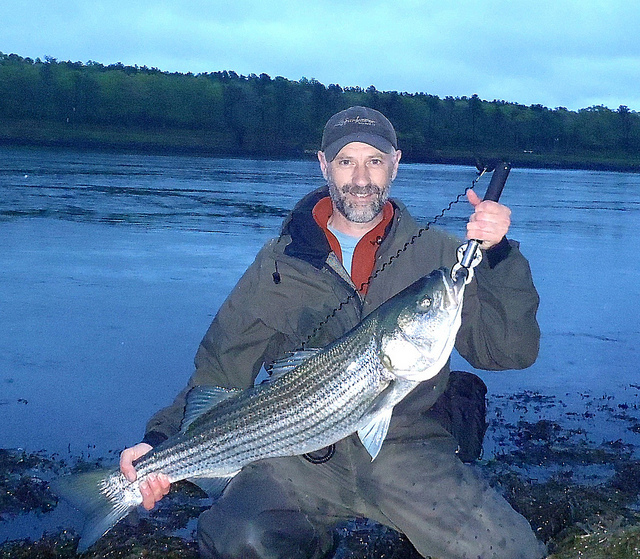