I was returning to Cork after a visit to the east coast when I happened to hit the early evening traffic along the Quay in Waterford. Finding myself in the wrong lane, I ended up on the R783 to Dunmore East instead of the main N25, which would have taken me directly to Cork. It was a fine summer’s evening so I decided to explore this pleasant corner of Ireland in the warm sunshine. I passed through Tramore and the coastline known as the Copper Coast opened up in front of me. The name is derived from the copper mines that were along this coast in the 19th century, and a lonely chimney and winding house can still be seen near Bonmahon. The thundering Atlantic Ocean has been eroding the rocky coastline here for millions of years to create a stunning landscape of jagged cliffs, rock stacks rising from the sea and small sandy beaches, which are a bass angler’s paradise. 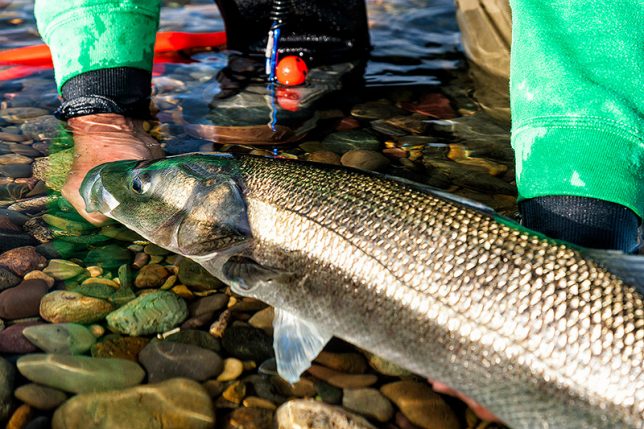 A few miles west of Tramore I came across a small beach with a car park and decided to take a break. A few people were swimming in the evening sunlight and I wandered down to the water’s edge. The beach looked good – golden sand with weed covered rocks that looked ideal for bass. If it had not been for the fact that it was low tide I would never have found one of my most productive areas of the past ten years. I walked between sections of cliff that had been eroded away. A climb over some large boulders and weed filled gullys led me onto a section of pebbled beach around a mile and a half long, which would be cut off over the high water period. The shallow gullys glistening with kelp would provide great feeding ground for bass as the tide flooded in but unfortunately I had no fishing gear with me. However, I knew that I had gazed upon paradise, so, like Caesar leaving the shores of England I told myself, “I will return.” (Or was it Arnie, “I’ll be back”)

Well, I did return a couple of weeks later with a pal of mine, and we timed our trip to coincide with a flood tide around dusk. It was a perfect evening and as the tide flooded in we cast our plugs towards the horizon. A long lazy swell washed along the shingle with a great sigh, and on my first retrieve I was hit by a fish at close range. First fish of the evening at around 6lb! A great start. We walked along the shoreline casting into the gullys that were now filling with the rising tide, and we took four more bass, the last one taken as the last rays of light blazed across the western sky. We made our way around the corner, back to the car park in near-darkness just before we were cut off by the incoming tide.

Over a couple of seasons we fished this section of coast on a regular basis and it was rare to have a blank. That was over ten years ago when the bass fishing in Ireland was supposed to be poor! Having ground equally as good closer to home, I neglected fishing this spot until a couple of years ago when I returned again. After landing a couple of seven-pounders on plugs I was hit by one of the biggest fish I had ever hooked. After ripping some fifty of sixty yards of line on a rod straightening run a massive tail appeared on the surface as it let go of the plug and waved goodbye.

In rough conditions this beach can have quite an undertow and weed can make plugging hard, so on another afternoon in July I was armed with a bucket of crabs and a light eleven and a half-foot rod. Although dusk and dawn seem to be the most productive, Irish bass don’t seem to mind the middle of the afternoon either. There was around 18 inches of water in the gully, and a brisk southwesterly breeze was putting up a good bit of sea as I lobbed my crab out about ten yards. A fellow walking a couple of dogs approached me just as my line began to make a lazy S-shaped motion as it approached the edge of the shingle, then made a lazy U-turn before heading out to sea again. At this point I tightened up and all hell broke loose in front of me as a large bass erupted, thrashing on the surface. The man stood next to me sucking on his pipe, passing the time of day seemingly oblivious to the fact that I was playing a good-sized fish. As I moved along the shoreline so did he, keeping up his conversion all the while. The dogs and I began to argue over who had the right to the bass thrashing about in the waves, but after a sharp kick or two I convinced the dogs that the bass was mine. I weighed and returned the fish, a fine female of over 8lb 5oz. Putting the bass back did make my new-found friend pause in conversation, and it did give his dogs a little more excitement for a few moments before the fish swam away.

My next four casts produced another three fish between 7 and 9lb 12oz, and the latter fish adorned my table later for a fine feast. I asked my companion if he had ever seen anyone fishing this beach, and he replied that in twenty years of walking his dogs I was the first person he had seen fishing. Now I’m sure the beach does get fished from time to time, but this is really an area that is very much unexplored by shore anglers. Why should they fish such a rocky area when there are plenty of open sandy beaches close by where they are unlikely to lose tackle? For the first time last year I did see another pair of anglers making their way along the beach towards me. What right did they have fishing on MY beach! It was OK, they were Frenchmen on holiday, and despite neither of us having much grasp of the other’s language we were able to communicate as only anglers do, with much showing of tackle, wild gesticulating and several “tres bonnes” on my part. The French lads were using large orange water-filled floats, the size of ‘Jiff lemons’ and large Redgills on long traces. They were belting these things out and as far as I could see, they didn’t catch anything that afternoon and I had one of my rare blanks, although on subsequent trips I took fish over 6lb again. The average size here is high, and specimen fish are often landed but, as it is here in Ireland, very few of them are weighed in for the specimen list.

Even though I live in Ireland it will still take me a lifetime to explore the coast here. I keep discovering new marks that I mean to fish but never get the time. For the visiting angler, Waterford and the Copper Coast could prove to be one of the best areas for bass in Ireland. It is a great coastline to explore for those who arrive at the Rosslare ferry port, and at the right time of year large fish move close inshore and are well in range for plugging and even fly fishing. For me a wrong turn was taken at the right time and a whole new venue was opened up to me. Maybe I’ll see you there sometime.