B.A.S.S. fully supports both catching for the table and catch and release sea angling. But in all cases, members are asked to treat fish with respect.

Current bass fishing regulations include months that are “no-take” for sea anglers. So, this article deals primarily with caring for bass that will be released and ensuring we do not contribute unnecessarily to post-release mortality. 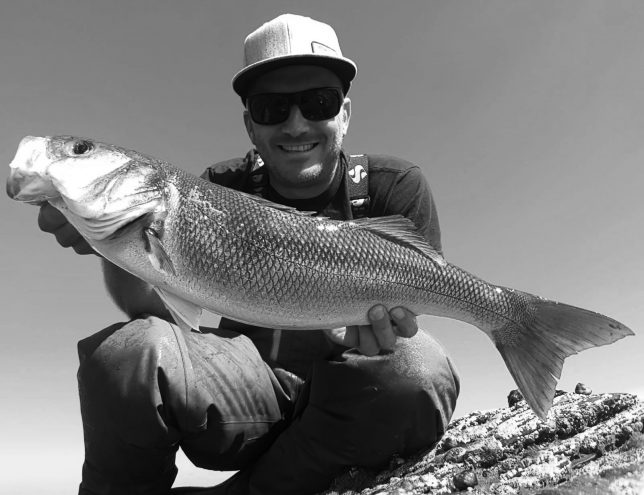 Catching and releasing fish inevitably causes some degree of harm, whether stress or physical damage, but I feel it’s my ethical responsibility as a sea angling guide to promote best practice so that when fish are returned they have the best chance of survival. Equally, if you choose to keep a bass for the table during the “take” months (within current size and bag limits), it is important to dispatch the fish humanely.

Of course, using unhooking mats and keeping fish submerged as is done in coarse or game fishing often isn’t practical or safe when fishing on the coast. But it’s easy to follow a few simple guidelines to improve the survival rate of bass and the future of our bass fishery. This is my personal take on things, informed by my work as a zoologist at the Centre for Applied Zoology in Newquay.

Lures come with barbed hooks, crush these with a pair of pliers. A well-played fish can be landed without barbs. Many anglers replace treble hooks with specifically designed singles as the hook up rate is very similar but fish are easier to unhook.

Replacing rusty/blunt hooks increases hook-up rate and avoids snapping-off and leaving a nasty bit of metal in a fish. Replacing ten feet of line and re-tying a leader avoids those weaknesses in line/leader caused by scuffs, scrapes and general use leading to snap-offs whilst playing fish and casting.

Consider how you intend to land a hooked fish before casting. This is easily done whilst wading in an estuary or a surf beach, but snaggy rock marks where lifting a good fish will result in the line snapping is more daunting with swell washing around the rocks. Have a plan, maybe agree with your fishing buddy to help each other. With a bit of practise, landing nets can be invaluable in these situations, but be prepared to have a trial run, it’s not as easy as it looks!

Bass are perfectly designed to protect themselves from predators. Armed with spiny dorsal fins and sharp gill plates, they do their best to roll or freeze with sharp points exposed making safe handling difficult. It’s often easiest to grip the hook shank with pliers and turn it out without touching the fish, especially effective whilst wading – the fish never leaves the water. The safest way to handle and restrain a bass is by gently inserting a thumb into its mouth and clamping the lower jaw with your forefinger. The bass is now yours but it’s important to support the rest of the fish’s body with your other hand. Not supporting its body results in unnecessary strain on the fish’s jaw.

Avoid leaving fish to flap about on rocks or sand, which is not as easy as it sounds. Ensure you know where your equipment is accessible, keep in mind what your prize bass is doing, and stay focussed as it’s likely to try to escape and may injure itself. Laying the fish on seaweed or in a shallow rock pool helps. When it actually comes to holding the fish, maybe for a photo or in a weighing sling, kneel close to the ground, so when the fish starts flapping around, it’s only a short distance if you drop it.

There is no reason not to do this, it avoids the fish further hooking itself or yourself and can be the longest part of the return process.

Learn how your camera works

Set the timer e.g. for 3 shots after 5 seconds, 12 shots in 20 seconds (if possible) and then you’re running back to the sea for the release. Consider returning subsequent fish straightaway without photographing if you’ve already got some good pics for your social media upload!

Easier said than done. It can be difficult fishing through a shoal of tiny bass in the hope of a bigger one but consider a change of tactics/lures to avoid hooking small fish, after all they are the future breeding stock (and a fish of under 42cm won’t have had the chance to spawn even once). I know a few highly regarded local bass anglers who will simply pack up and go home if they’re being plagued by schoolies. Inevitably small fish get hooked, play these quickly and return them.

Don’t even think about leaving the house without a pair of pliers, you’re not getting hooks out of spikey bass without them. Fish grips, love them or hate them, in the right hands and used correctly are an extremely valuable piece of kit. Gently gripping the lower lip whilst supporting the fish’s body can save your thumb from getting hooked and give that extra space for removing the hooks from the mouth of the bass, limiting potential damage to both fish and angler. 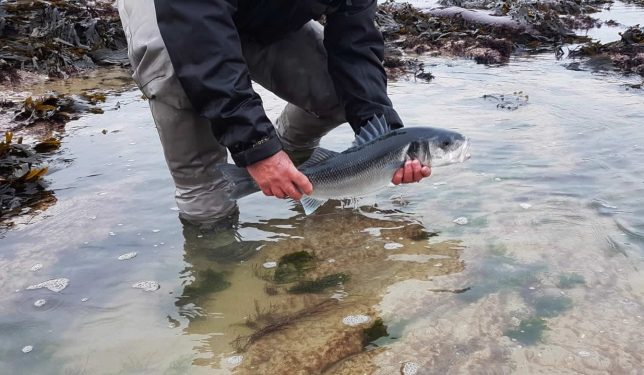 Many catch and release anglers say it’s the best part of their fishing experience. Make it as easy as possible for the fish and as safe as possible for yourself. Where possible fish should be held upright in the water and released when ready. Although this isn’t always possible and safe, instead of throwing or dropping a bass, consider lowering it back down in your net. Often returning fish is dangerous; always err on the side of caution; if it is too rough to get close to the sea, maybe leave a fish in a rock pool that will soon be covered by the tide.

We all know the shorter the time a fish spends out of water the better – some scientists suggest 30 seconds or less. Fish are designed to be suspended in water and whilst gaseous exchange will still occur as long as the gills are wet, environmental pressure on the fish’s muscle fibres and vital organs will cause considerable stress and impact on the speed of the fish’s recovery. Not a lot is known about bass mortality after release but compared to many other species that go belly up on return, bass usually swim off strongly and recent studies have suggested a very low mortality for bass released by recreational anglers.

First published in Sea Angler in 2019