Big Bass On The Brink

[Comment – this article first appeared as an advert in the September 2005 issue of ‘Sea Angler’ magazine, paid for from funds donated to the BASS restoration project.
If you prefer, you can download the original article as a pdf file (1MB). You will require a copy of Acrobat Reader to read the pdf file, a free download is available from the Adobe website.]

Believe it or not, a few decades ago, only anglers were interested in catching bass. There was no real commercial interest until the mid-seventies – but then there were plenty of cod and haddock around – not so now.

Lack of commercial interest in bass was just as well, because as a long-lived, slow-growing fish, large bass of 4.5 kilo (10 lbs) and above were never thick on the ground. Nevertheless, a significant proportion of the population did live to reach old age and grow to weigh double figures and some anglers were fortunate enough to capture one such fine fish in most seasons.

Back then, the nomadic bass was at its northern-most limit around the UK and spawning success was haphazard with about one year in ten providing the bulk of the stock, but this was sufficient to ensure that anglers were satisfied with their catches of bass.

By the end of the seventies there were changes afoot – some good – some disastrous for bass.

Bass were becoming fashionable in the chic restaurants of Sloane Square and TV celebrity chefs began to promote bass as a delicacy. Demand for bass was escalating at a time when, the dreaded monofilament gill nets also became widely available. The writing was on the wall!

The minimum legal size for bass has always been well below the size when they spawn. Increasing commercial fishing pressure has gradually eroded the quality of the bass stock, with medium and larger sized fish becoming rare in anglers’ catches. The final twist was the targeting of spawning bass in the English Channel, firstly by French boats and more recently with a free-for-all with Dutch and Scottish vessels displaced from the seriously overfished cod fishery.

There was a positive shift taking place – the climate was changing. Winter sea temperatures were rising and instead of good spawning once every ten years, from 1989 bass have enjoyed a succession of excellent spawning years. Recruitment is at an all time high and survival of tiny bass is better than ever. Bass populations have also moved further north and can now be found all around the UK and even in Norway!

With the decline of cod, bass have become the angler’s first choice. A recent survey found that 70% of sea anglers now fish for round fish, such as cod and bass and an estimated £100 million is spent each year by sea anglers targeting bass. Compared to the first hand sale value of commercial bass catches – £3.1 million in 2003.

(source:Defra web site) anglers are THE goose that lays the golden egg for UK PLC.

So what’s the problem?

Quite simply, despite the increased breeding success of bass, the overwhelming majority get caught by gill nets and trawlers before they have spawned. Whilst anglers in many locations can catch as many, or indeed more bass than used to be the case, however most are less than a couple of pounds in weight.

Given the increase in young bass and their spread further north, anglers should and could be enjoying mind – blowing fishing. 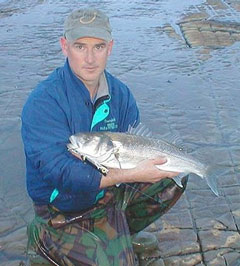 [photo – a 5lb bass ready for release – with proper management, bass this size will be plentiful – photo courtesy Mike Ladle]

Whether fishing for bass with baits, lures or flies, whether fishing from boat or shore, bass angling around much of the UK should produce lots of 2-3 kilo (4lb-7lb) fish, with good prospects for fish up to and over 4.5 kilo (10lbs). But these fish are nowhere to be found – they’ve mostly been caught in nets and exported to the continent.

Mother Nature is doing her best to provide us with good sport BUT the current fisheries management regime, as always, is dominated by protecting commercial fishing. The needs of anglers are being ignored.

A Better Future For Sea Anglers?

In 2003, the Prime Minister’s Cabinet Office set up an enquiry into the future of the UK fishing sector and extensive stakeholder consultations took place. A NUMBER OF ANGLING ORGANISATIONS WORKED STRENUOUSLY to make the case for angling. For once, they were listened to.

In March 2004, a 200+ page report was published by the Government. It made frequent reference to the value of sea angling and a whole section was devoted to the angling sector. Some of the main points in this report were:

These words should sound like music to angler’s ears BUT they are only recommendations.

They come from a team of independent experts who don’t carry the cultural baggage of saving the commercial fishing industry at ALL costs.However, you can imagine the outcry from some commercial quarters and the lobbying to get such recommendations stopped in their tracks.

It’s up to us as Sea Anglers to get our act together and ensure that the recommendations become REALITY. In other words we ALL have to shout LOUDLY, if our voice is to be heard and listened to. The future quality of bass angling is in our hands.

The evidence for recognition of the socio-economic value of sea angling continues to grow. For many fish species anglers’ expenditure on sport fishing dwarfs commercial value and ANGLERS ARE THE MAIN STAKEHOLDER.

But we have to get political if we wish to see things change for the better and have bass managed for anglers not commercial fishermen.

The Government’s advisers have singled out bass as a candidate for recreational priority and have requested that sea angling puts forward a plan to ensure best value is achieved from our bass stocks. 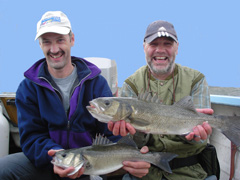 BASS members have contributed to research over many years and have produced a 60-page document outlining how our sport can be developed over the next few years. This document has been presented to government and fisheries managers and is called:

Many BASS members fish with equal devotion for other species as well, and are convinced that if progress can be made with bass, it will open up opportunities for other species by substantially raising the profile of recreational sea angling.

You can make a difference – stand up to protect and improve your sport – otherwise you can:

Defra and the Welsh Assembly Government will be holding public consultations during the late summer. This is YOUR only chance to have YOUR say. Check out the BASS, NFSA & SACN websites for advice on how to join in. Please participate in this important debate. If you don’t ask – You won’t get!

The plan lays out how we can restore the numbers of larger bass available to sea anglers by introducing:

Reward:
More and Bigger Bass For You